How Much Pee Is In Pools And Hot Tubs? Let This New Science Horrify You

Researchers in Canada have developed a new test to gauge urine content in pool water, and mostly what they’ve learned... 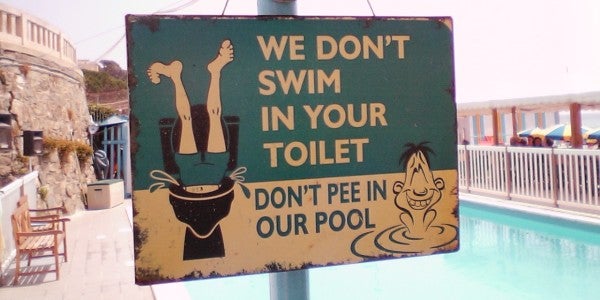 Researchers in Canada have developed a new test to gauge urine content in pool water, and mostly what they’ve learned is that you dirty animals let it go in public pools and hot tubs a lot. How much? Read on if you dare.

Lindsay Blackstock, head of the five-person University of Alberta research team, explained their new testing process in an interview with The Guardian on Wednesday. Essentially, they gauge how much of a certain artificial sweetener is present in a pool or a tub. That sweetener, acesulfame potassium or Ace-K, “is commonly found in processed food and passes through the body unaltered,” The Guardian writes.

Measure the Ace-K content in the water, the researchers say, and what you pee is what you get.

So what did they get? Says Blackstock: “Our study provides additional evidence that people are indeed urinating in public pools and hot tubs.” They found Ace-K in 100% of the 31 pools and tubs they tested in two Canadian cities. The hot-tub situation is a total piss show. All eight hot tubs listed had high urine content; a Jacuzzi in one hotel “had more than three times the concentration of sweetener than in the worst swimming pool.”

That said, the worst swimming pool ain’t great, either:

“After tracking the levels of the sweetener in two public pools in Canada over a three-week period they calculated that swimmers had released 75 litres of urine – enough to fill a medium-sized dustbin – into a large pool (about 830,000 litres, one-third the size of an Olympic pool) and 30 litres into a second pool, around half the size of the first.”

Seventy-five liters of urine is about 20 gallons, in the space of 21 days. So if anyone ever says you’re not worth a gallon of warm piss, you can tell them that’s basically a day’s worth of public-pool pee. How can something that keeps kids warm while they swim not be worth something?