On July 12, Medal of Honor recipient and Army veteran Ty Carter found out that his service dog, a German... 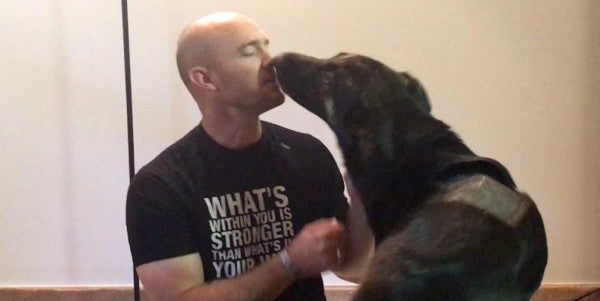 On July 12, Medal of Honor recipient and Army veteran Ty Carter found out that his service dog, a German shepherd named Nala, had a herniated disc that was almost severing her spinal chord. If it wasn’t treated, Nala would lose most of her motor skills. She needed surgery immediately.

After Carter received Nala’s bill from the vet, he and his girlfriend, Jennifer Aédo, realized they wouldn’t be able to cover the costs, which came out to nearly $10,000. On July 23, Aédo set up a GoFundMe page to help cover the cost of Nala’s surgery.

“Ty and I don't have much; Certainly not enough to cover the bills of Nala’s vet, surgery, and after care,” reads the GoFundMe description. “She's not simply a pet and has done more for Ty mentally and emotionally than any person in our lives.”

Now, Nala is recovering from her surgery “little by little each day,” Carter told Task & Purpose.

“She is still weak in her back legs because after not really walking for three weeks she lost muscle and her mechanics so we're doing physical therapy and massaging her three times a day to build her strength back up,” said Carter, in an email.

Nonetheless, Nala is still on duty and stays glued to Carter’s hip as often as possible.

“Even though she’s injured and still recovering, she’s still trying to do her job, which is pretty awesome,” Aédo told Task & Purpose.

Carter got Nala as a puppy in 2012 when he returned home from his second deployment. According to Aédo and Carter, Nala was privately trained in Yelm, Washington, as a service and emotional support dog, as well as personal protection.

“When I'm stressing out doing school work or handling business calls she knows to come check on me by putting her head in my lap or just sitting at my feet under the desk,” said Carter. “She senses emotion and is very in tune if I'm off that day.”

“The military/veteran community is an incredible family to be a part of and I'm grateful that in such a short amount of time so many banded together to help us out when we were at the end of our rope,” said Carter who also had his Ford F-350 stolen just 2 days after Nala had her surgery.

Carter was awarded the Medal of Honor in August 2013 for his actions during the Battle of Kamdesh in Nuristan province, Afghanistan.