“I’ve never had to brief landing on a house.” 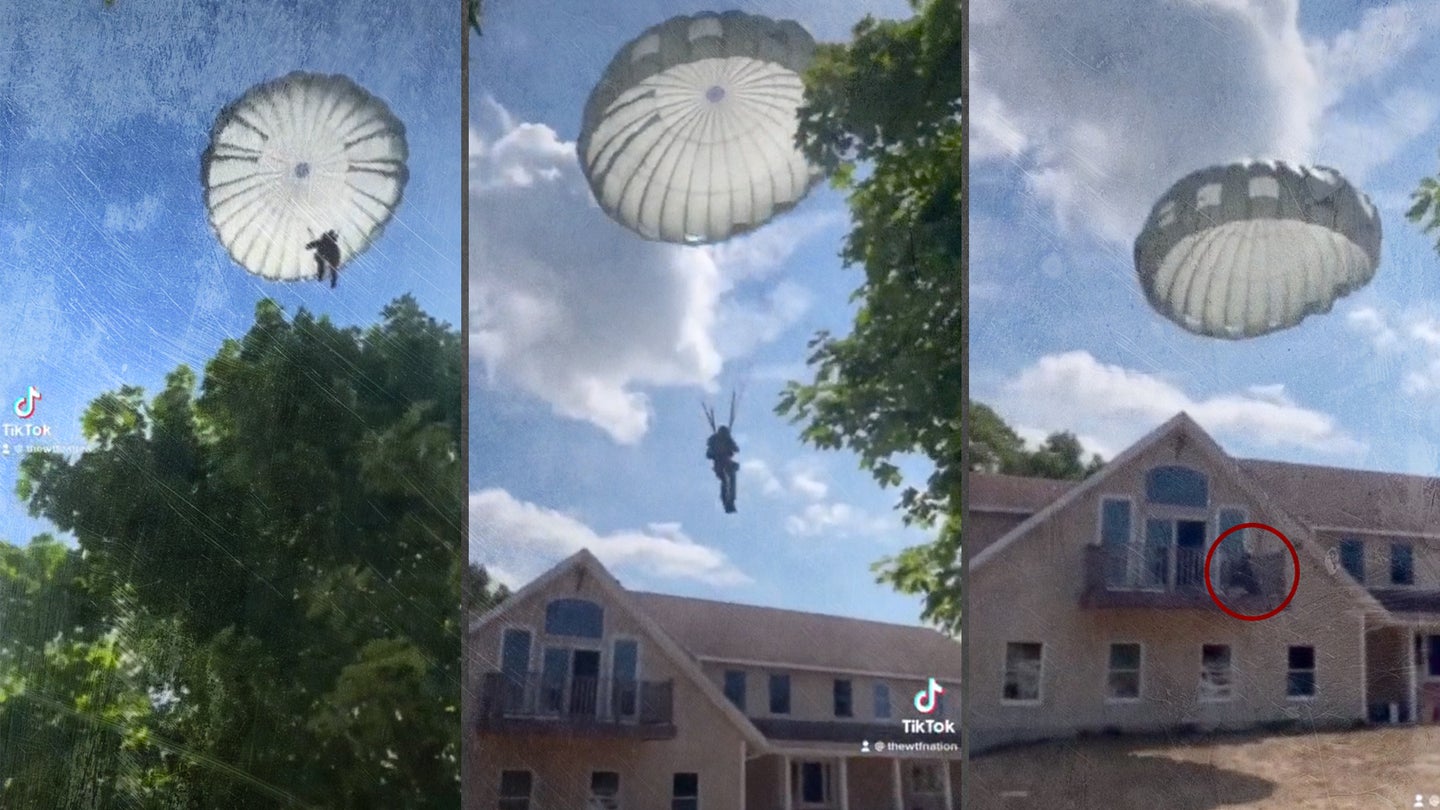 A paratrooper lands on a house's second-story balcony. (Screenshots via TikTok).
SHARE

It’s not completely unheard of for military paratroopers to land, well, not where they expected, whether it be in some nearby trees or on someone’s kitchen floor. And a recent video making the rounds on social media adds one more unlikely landing to the list: Directly on someone’s second-story balcony.

A video shared online this week shows a German paratrooper who was participating in this year’s Leapfest — an international competition for U.S. and foreign military service members. The competition was held in Rhode Island this year, and teams were tasked with jumping from a CH-47 Chinook helicopter from 1,500 feet to a drop zone on a privately owned farm.

The German paratrooper landed on the balcony of a house in the drop zone, according to an experienced jumpmaster with the Army’s 82nd Airborne Division who heard about the incident as word spread through the airborne community.

And yes, landing on a house is exactly as uncommon as you think.

“I’ve never had to brief landing on a house,” the jumpmaster, who has jumped over 70 times, told Task & Purpose on Friday under the condition their name not be used so they could talk freely..

Without knowing details like where the paratrooper was aiming to land or what the surface wind was at the time of the jump, it’s hard to know exactly what went wrong. But watching the video, the jumpmaster was able to pick out a couple of mistakes, namely with the paratrooper’s form.

For example, U.S. paratroopers are taught to turn into the wind in order to slow themselves down, but the jumpmaster said you can see in the video that the German paratrooper is drifting with the wind, instead of against it.

“He was going with the wind and never turned against it to slow down,” the jumpmaster said. “And the reason for that I think is just the nature of the competition. They put an ‘X’ on the drop zone and they land as close to that X as possible. If they don’t land on the X, their time continues until they recover their parachute and run to the X, and then their time stops.”

The jumpmaster also noticed that in the video, the paratrooper is seen pulling down on both toggles in the parachute and “moving his hands frantically” as he nears the house, which is a “highly ineffective way to maneuver that canopy.”

“You should either pull one or the other to turn and then you pull down on both of them and keep them stable at a certain level,” he said. “You don’t rock them back and forth, because that would cause oscillation, and oscillation makes you fall faster.”

It may have just been a brief moment of panic as the paratrooper saw he was going to hit the house, but the jumpmaster said the movement was also reminiscent of something freefall paratroopers do before they land.

In the U.S., freefall training is typically done by service members in “elite organizations” like the Army Rangers or Army Special Forces, Marine Force Reconnaissance, Navy SEALs, and Air Force Para-Rescue and Combat Controllers, according to the Army. Freefall training is not included in the Army’s basic airborne training course. But as the jumpmaster explained, some other countries’ airborne schools are more elite and similar to what you might find in Army Ranger school.

“They do freefall and stuff like that just being airborne,” the jumpmaster said. “So I’m not sure what his qualifications were, but the way that he pulled down on those toggles kind of reminded me of what a freefall paratrooper does.”

Thankfully, the jumpmaster said he’s never had a paratrooper land on someone’s house before, though he has had them land in trees or nearby neighborhoods. The most important thing to do in any situation, however, is disconnect from the canopy as quickly as possible to avoid being pulled further by the wind, and the jumpmaster said it looked like the German paratrooper was doing exactly that.

It’s unclear what that paratrooper’s final score was or how he and his team fared in the competition. But at the very least, it seems likely the incident could provide a good example of what to do (or not do) if a paratrooper finds themself drifting closer and closer to someone’s home — namely, to steer away from it.