10 Things Only Military Linguists Will Understand

The Defense Language Institute — or simply DLI to the many Department of Defense service members and civilians who have... 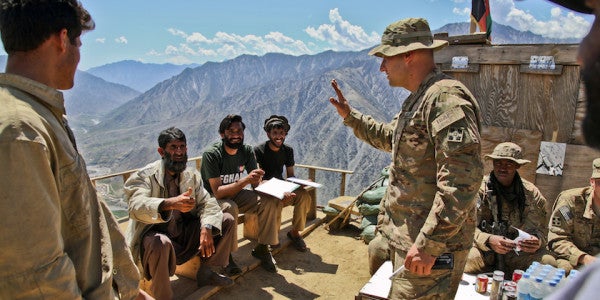 The Defense Language Institute — or simply DLI to the many Department of Defense service members and civilians who have gone through foreign language training — is renowned for being one of the most prestigious and rigorous language schools in the entire world. Every year, thousands attempt to make it through the exhaustive 26 to 64-week courses, which consist of five days a week of in-class foreign language study that lasts seven hours a day — plus two to three hours of homework per night. The formidable 98% native speaker instructor cadre teach over two dozen languages at the Defense Language Institute, and due to the extreme difficulty of the programs, student pass rates are dismal.

Most military, veterans, and intelligence community members know exactly what DLI is, and can probably even tell you about the infamously high washout rates, the intensely long training, and the squirrelly jobs linguists get into after they graduate.

However, the following list is a collection of things that you probably won’t appreciate unless you’ve experienced the Defense Language Institute in full force. Here are 10 things only those who have attended will understand.

1. You remember the familiar call of the sea lions in the morning.

No matter if you're down on Soldier’s Field, or up at Belas Hall dining facility, the guttural cries from angsty sea lions can be heard with an uncanny distinctness.

2. You have heard about the “firehose” concept countless times.

As soon as you stepped off that bus onto the Presidio, you were warned that learning a language at the Defense Language Institute was like drinking from a firehose — it’s going to be painful, you’ll never manage to retain everything that’s thrown at you, but you’ll absorb way more than anyone trying at normal speed.

3. You know all the terrible nicknames for DLI.

“Desperate Love Institute” is one of DLI’s many nicknames due to an overwhelmingly high rate of tech-school marriages that occur during the year or so spent in Monterey. Rumor has it that DLI has the highest rate of tech-school marriages, and Goodfellow Air Force Base (the follow-on assignment for most DLI students) has the highest rate of divorces.

4. You’ve had a DLAB dick-measuring contest or the “my language is more difficult than yours” argument.

The Defense Language Aptitude Battery is the test that earned you your seat at DLI. The test — which measures your ability to learn and attempt to understand a made-up language — was a source a pride for many service members, who would inanely brag about their scores.

And we get it — Chinese doesn’t have an alphabet, and Pashto has obliques.

5. You trust the sacred legend of the eagle statue.

The ancient DLI folklore of the bronze eagle statue has been passed down for generations. Legend has it that if any student leaves DLI still a virgin, the eagle statue will fly away. To this day, the eagle perches proudly on its post, confirming that no one leaves DLI without — at the very least — having a one-night stand with someone they met at The Brit.

6. You know why the LARP embargo exists.

According to many members of DLI leadership, live-action role play was banned on post because some people pretended they were vampires and bit passersby as they walked along the trail to the PX.

7. You know, love, and will forever cherish the memory of Compagno’s Deli.

8. You believed (and spread) the rumor about successfully putting a reflective belt on a deer.

Many troops who had been at DLI for eons would tell the newcomers that if you manage to put a sexy/glow/reflective PT belt on a deer, you’re instantly awarded phase graduate — and DLI immortality.

9. You’ve done a Walk of Shame up Franklin Street after a night at the Mucky Duck.

10. You still have dreams in foreign languages.

How is it that we always speak better Farsi when we’re asleep?