10 Questions Only A Veteran Would Ask Vincent ‘Rocco’ Vargas

Anyone who’s ever been to basic training knows that the relationship between trainers and trainees is strictly lopsided: The drill... 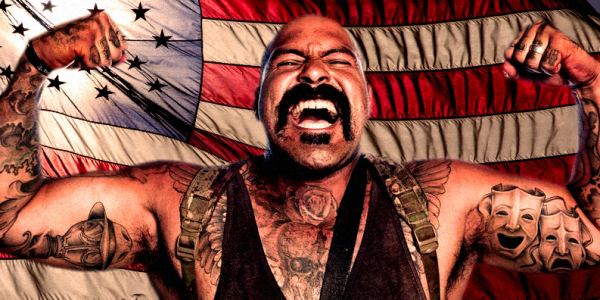 Anyone who’s ever been to basic training knows that the relationship between trainers and trainees is strictly lopsided: The drill instructor screams orders, and the new recruits follow them. There’s no small talk. No in-between. So when Sgt. 1st Class Vincent Vargas, a drill instructor in the U.S. Army Reserve, recently found himself being addressed as “Rocco,” his nickname, by one of the privates in his charge, he was, understandably, caught off guard.

“I said, ‘Call me that again and you’re going to see a whole different side of me,” Vargas recalls. “He’s the only guy who ever tried to cross that line in the several years I’ve been doing this. I carry myself in such a way when I’m in uniform that they’re usually too afraid to approach me.”

Vargas, who grew up in California’s San Fernando Valley, leads something of a double life. The Rocco nickname originated out of uniform, during a drunken night out with Jared Taylor and Mat Best, colleagues from Vargas’ day job as chief operations officer for Article 15 Clothing, a successful military-oriented apparel company with a fan base that includes many of the young recruits who pass through Vargas’ ranks. It’s certainly a fitting moniker for a guy who bears a striking resemblance to Dwayne “The Rock” Johnson and has Taco Life tattooed across his knuckles.

“JT [Jared Taylor] told me I was acting like a bouncer, trying to keep Mat safe the whole night, so he just started calling me Rocco,” Vargas says. “I guess I’m always playing the dad role.”

At 35, Vargas has been playing the “dad role” for most of his adult life. He was a 23-year-old husband and father when he joined the Army in 2003. As a member of the 75th Ranger Regiment, Vargas deployed once to Iraq and twice to Afghanistan before leaving active duty in 2007. After transferring to the Reserve, Vargas joined the U.S. Border Patrol and spent the next several years conducting missions and rescue operations as a medic assigned to the Border Patrol Tactical Unit. Vargas enjoyed the work, but at some point along the way, he joined forces with Best and Taylor and his career path took an unexpected turn into the fashion business, which is how he became Rocco, the larger-than-life cult icon today’s Army recruits admire (from a distance).

Over the years, Article 15, which specializes in shirts emblazoned with all-American epithets like “Good At War” and “Zero Fucks Given,” has amassed a huge and loyal following via social media, often with irreverent scripted videos starring Vargas, Best, Taylor, and a slew of other veteran entertainers, many of whom, like Vargas, had very little or no acting experience before they started doing it professionally. “I think it comes naturally because we’ve run the gamut of emotions and experiences in our lives,” Vargas says. “Like, you want me to act scared? I’ve actually been scared.”

Last year, Vargas cut his teeth playing an exaggerated version of himself in “Range 15,” a feature-length zombie apocalypse spoof Article 15 co-produced with Ranger Up, another military-oriented apparel company. For those who haven't seen it yet, here’s a little anecdote to prepare you for what’s in store: At one point in the film, Vargas has wild sex with an animated corpse. But crushing skulls and banging zombies is Rocco’s deal. Vincent, on the other hand, has written a children’s book, called “My Military Dad…Does Things A Little Different,” and is currently working on a book of poems with fellow soldier-turned-YouTube-celebrity Derek Weida.

Between producing a podcast, acting, taking on public speaking engagements, penning books, running a publishing company, producing music and films, and yelling at privates on the weekends, Vargas is an incredibly busy guy, which begs the question: What’s the plan? “We really want to have something that goes mainstream and blows up,” he says. “We’re all these alpha male mentalities, these big personalities, and we all want to be successful. We’re all competitive. So it’s like, hey, let’s just try to be the best at everything we do. We just can’t let it lose steam.”

Vargas has lived a pretty extraordinary life, but now it's time to turn our attention to the important stuff, the hard hitting questions that will help us make better sense of this human enigma. So, without further ado, here are 10 questions only a veteran would ask Vincent “Rocco” Vargas. Fortunately, he answered them all.

Oh man, I was one of those straight shooters, always trying to do things right. I was a mature private. I was 23. I didn’t make dumb private decisions. I already had kids. I was an old dude compared to everyone else. I already did four years of college, partied my ass off, and joined the military to do right.

Rip It, man. I just had a damn heart procedure because of all the energy drinks and pre-workout supplements. I’m going to blame this on the Rip Its.

If you’re doing it for the college money . Because then they show up and go to war and they’re like, “Fuck, holy fuck. All of this for college money?”

“Black Hawk Down.” I watched it a million times before I joined, and when I joined it was to be an Army Ranger. That was my fucking go-to as to what I hoped to run into one day. They were considered to be badass and, it’s funny, throughout my career I’ve run into a lot of the guys portrayed in the movie, which is cool. They were the scariest bastards alive.

This is easy. If you get patriot cookies, peanut butter, the spiced apples, the spiced apple cider drink, and you put those all together, heat it up, mash it up — that’s warm apple pie for you. Your mother doesn’t make pie better than that.

I would’ve joined at 18. I loved my career, but I just wish I had done it when I was younger. I was lucky because I was older, and I was able to make smarter decisions. I went in there and said I wanted to be Special Forces, but I didn’t get a high enough GT score, and I’m glad I didn’t. I really enjoyed my time as a Ranger and what it stood for. And so to be able to do that, I feel like I chose the right path. I wish I would’ve done another four years, though. So I wish I would’ve joined when I was younger and had done another four, but the path I took in my original enlistment was exactly what I wanted.

Airborne, first jump. The only reason I went to airborne school is because I wanted to be a Ranger. I loaded in the back of the aircraft, thinking I’d be the last jumper. They reverse loaded and I was the first jumper. Scariest fucking moment. The jumpmaster actually kicked me out. I didn’t fucking jump.

I got distinguished honor graduate in Ranger School. I’m proud for different reasons. The date I graduated was the anniversary date of the death of my buddy. So I really felt like I was getting that tab for both of us. To be able to get the distinguished honor graduate was just icing on that cake. That was a blessing to receive that. My buddy and I went to basic together, and airborne together, and he got to Ranger Battalion and was killed in a training accident. That was Dec. 16, 2004. I graduated Ranger School Dec. 16, 2005.

Shoot where your team leader shoots, go where your team leader goes, do what your team leader does. That’s what your born and bred and taught in the Ranger Battalion. I’d have to punch dudes in the head to fucking shoot. One of our first missions of my last deployment, and we got into a little bit of a firefight in an alleyway, and one of my new privates was just sitting there freaked. So I got my SAW gunner shooting, I brought the big gun in and he’s shooting, and I’m looking at the private and he’s not shooting. I punched him in the earhole and aimed him in the direction and was like, “Shoot that way, stupid.”