The Anatomy Of A Bullsh*t SAS Sniper Story

“The shot was one in a million.” That’s a quote from a new “exclusive” from Patrick Williams in the UK’s... 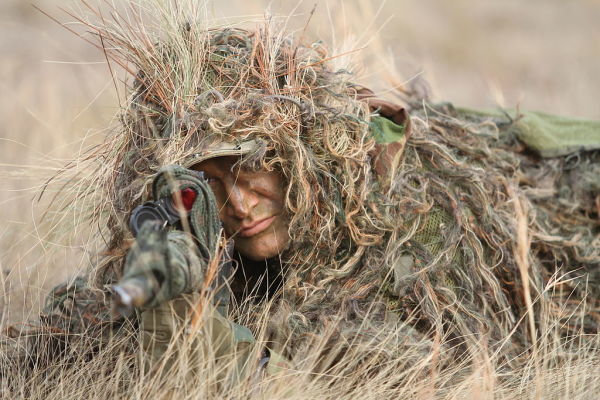 “The shot was one in a million.”

That’s a quote from a new “exclusive” from Patrick Williams in the UK’s Daily Star, published Monday with the headline SAS sniper’s ‘one in a million’ shot slays ISIS chief.

But it’s only one among many seemingly “one in a million” stories written by Williams at The Star, offering apparent insight into the secretive British Army special forces unit known as the Special Air Service.

And I’m not calling all of the stories bullshit, but they certainly sound a lot like bullshit.

Let’s take the aforementioned article, which starts out just like the at least dozen others written by Williams going back to 2015. Here’s the basic gist: An SAS sniper fired a single round in total darkness at an ISIS commander using a thermal scope, scoring a headshot at just shy of a one-mile range with only a 15-second window of opportunity.

Deeper in the story, we learn that the target was also moving, since the “turban-wearing figure” had just gotten out of the car and was headed into the house the SAS was supposedly watching.

Is your bullshit detector going off? Because mine is.

Now, I admit, it’s a bit of strange thing to do, debunking improbable stories posted by a tabloid that’s the British equivalent of The National Enquirer. But a much stranger thing happens when these stories get posted, which makes this column worthwhile: They are often treated as gospel and passed around in the American mainstream media, from Fox News to Business Insider, and then further perpetuated by a number of blogs. If you happen to have a lot of military friends on Facebook like I do, you’ll see these shared constantly soon after publication — and they all seem to follow a basic template.

First, the headlines, which are flashy and click-baity in style. Like this:

Second, there are the seemingly-crazy claims given in the stories, such as:

And before you ask, that last one was not the synopsis of an upcoming Arnold Schwarzenegger movie. It was something actually written by Williams.

Third, Williams further relies on a source or sources that often spruce up their claims with what I would call “rah-rah” motivational quotes, all of which seem a bit weird for a professional operator to say:

Could these quotes be coming from an actual person in the SAS? They could! But they sound a lot like something a bad writer would use in a straight-to-video Navy SEAL movie.

Interestingly, The Daily Caller expressed similar skepticism and tried to investigate all of these stories back in February 2017. At the time, there were only four of these dubious stories to look into, which a retired Army Special Forces soldier said were “of questionable credibility.”

But besides the fantastical claims of these stories, the existence of the Star writer “Patrick Williams” can’t even be confirmed. The Star doesn’t keep any kind of author bio for him on their site and gives no contact information, and I was unsuccessful in trying to find an email address or social media presence for him — a rarity for journalists these days who rely on people sharing tips.

The Daily Star Sunday provided an email address for Williams, but the message immediately bounced back. To the front desk woman’s big surprise, Williams’ name was nowhere to be found in the internal email system. After several refusals from various staff members to put TheDCNF in contact with Williams, Crime Editor Jimmy McCloskey explained that Williams was working under a freelance agreement and referred TheDCNF to Deputy Editor John Ward, who allegedly handles communication with Williams.

Ward insisted Williams is an actual human being, but he refused to give out contact information or any kind of evidence that supports Williams’ existence.

While it seems like these stories are more fiction than fact, The Star benefits from a policy from the UK Ministry of Defense, which does not ever comment on special operations forces, even on reports it knows are false.

So if you take one thing away from this 1000+ word article, it’s this: please stop sharing this shit on Facebook.