You wouldn't think listening to 'Gangnam Style' would make much sense during U.S. Navy carrier flight deck operations, but about... 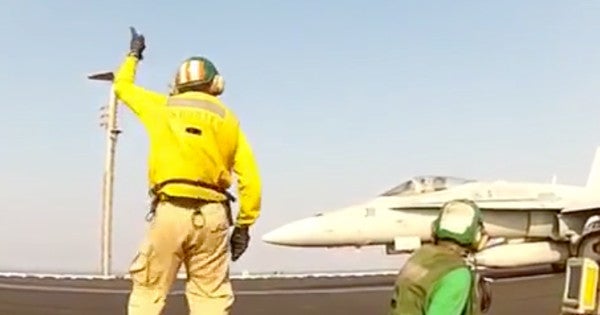 You wouldn't think listening to 'Gangnam Style' would make much sense during U.S. Navy carrier flight deck operations, but about a dozen catapult officers have proven us all wrong.

Our friend Doctrine Man reposted a video to his Facebook page on Wednesday set to the K-pop hit showing various Navy lieutenants in action, dancing, hopping and doing various other moves in the process of launching different aircraft off the ship (it wasn't clear when or where the footage was taken).

The video is pretty hilarious and probably brought a smile to the pilots watching and waiting for their turn to launch. While it may seem like these guys are just doing random dance moves that don't make sense, they are, in fact, conveying precise instructions in their hand movements — albeit with some added flare.

You can see various catapult officers dancing around while waving a finger around in the air, instructing the pilot to spin up the engine, or they're returning a salute to the pilot — telling him he understands the pilot is ready to launch. Then, of course, there is the launch signal, in which the catapult officer turns in the direction of where the aircraft will go, touches the deck, then brings his hand to horizontal.

The dancing and celebration afterward, however, isn't in the manual.