There is an ongoing debate about the continued viability of the aircraft carrier. Proponents point to the fact the carrier... 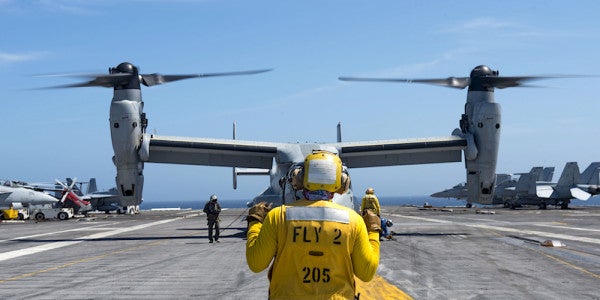 There is an ongoing debate about the continued viability of the aircraft carrier. Proponents point to the fact the carrier provides a range of capabilities essential for power projection and sea control that, without basing rights, cannot be provided in any other way. Opponents note that several nations have drones and cruise missiles that vastly outrange the short-legged carrier air wing. They also note that China has developed a ballistic missile specifically to kill carriers. A particular concern is that a carrier and air wing alone cost $20 billion and 5,000 Americans live aboard. This is an enormous investment of eggs is a possibly fragile basket.

So perhaps it’s time to think of a different way of providing the capabilities. Suggesting the use of amphibious big decks is not a different way – it’s just a very similar but much less capable basket. Instead, we need to consider how we could provide the same capabilities by merging old technologies with new to provide similar capability at a fraction of the cost in treasure and people. The old technologies are container ships and containers. The new are drones, cruise missiles, and advanced manufacturing.

Starting with the new, currently flying drones can provide long-range strike, surveillance, communications relay, and electronic warfare. Many are vertical takeoff and landing. Kratos Corporation has built an autonomous drone (QX222) with a combat radius of 1500 miles – three times the current unrefueled range of the carrier air wing. It is stealth configured but not stealth coated. It can achieve speeds up to .85 Mach and carry a 500-pound payload internally. Most importantly, it is autonomous and can launch and recovery vertically. Because it cost only $2M, it could potentially be sent on one-way missions.

Drones can be augmented by cruise missiles. As long ago as 2010, the Russians were offering four of their Club-K (Kaliber) cruise missiles in a standard 40-foot container. Estimates of sale price vary from $10M to $20M per loaded container. The land attack version has a range of 1500 miles and a 1000 pound warhead.

Recently, an online ship brokerage listed a 3-year-old, 44,000 dead-weight tonnage container ship for $12 million dollars. This is the size of a LHA and can carry thousands of containers. It requires a crew of 12. Used standard 40-foot shipping containers are selling for about $3,500 dollars today.

Thinking differently, we could envision any container ship – from inter-coastal to ocean-going as a potential aircraft carrier. It could carry from a couple dozen to thousands of cruise missiles as well as hundreds of autonomous drones ranging from short to long range and both reusable and expendable. And, of course, the containers could also be land based — with nearly unlimited basing and hide sites.

While container ships would lack self-defense systems, they would be no more vulnerable than the current Littoral Combat Ships. The DoD Director of Operational Test and Evaluation noted the LCS is unlikely to continue fighting after a single hit. In fact, a container ship weighing 40,000 tons will be more survivable than a 3,500 ton LCS. And of course, replacing a carrier lost in combat will take several years while container ships can be bought on the market.

Finally, advanced manufacturing (robotics, artificial intelligence, and high-speed 3D printing) has the potential to make such drones and cruise missiles much less expensive and available in the thousands or even tens of thousands.

The potential cost savings are exceptional. A Ford carrier costs $15 billion. A container ship in the low tens of millions. An F-35 costs $140 M. Kratos QX222 about $2M each. But the real savings are in lifetime personnel costs. You don’t need the over 5,000 sailors to man the carrier and its air wing. Nor do you need the training pipelines for those people. You don’t pay lifetime medical and retirement costs for those who earn retirement.

If we stop buying carriers after the JFK, the United States will still have seven carriers through 2050. If we shift funds to container ship carriers, we can vastly increase the numbers of platforms and weapons while cutting personnel and procurement costs drastically. And while carriers represent a fifty-year commitment and billions in decommissioning costs, container ships can be retired easily if necessary. In a time of rapid technological change, should we be making fifty-year bets?

Dr. T. X. Hammes served 30 years in the Marine Corps at all operational levels to include command of an infantry battalion and the Chemical Biological Incident Response Force. He earned his PhD in History at Oxford University and is the author of The Sling and the Stone.