US special operations soldiers attacked by ninja in California

An individual in ninja garb approached a soldier in the dead of night and asked "Do you know where my family is?" before attacking with a sword. 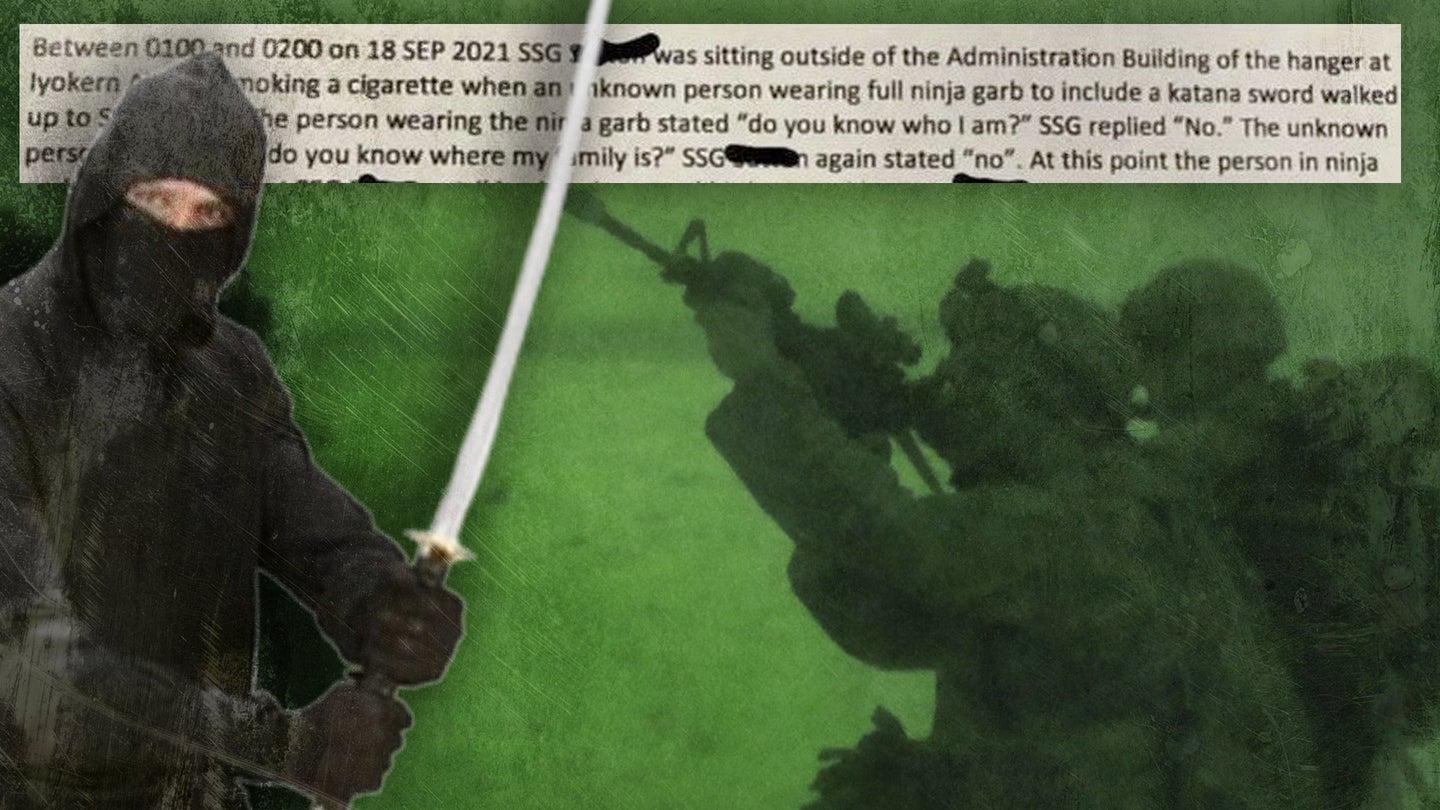 A photo composite shows soldiers at Hohenfels Training Area, Germany, on Feb. 16, 2021 alongside an image of a man in a ninja costume. (U.S. Army photo by Sgt. Thomas Stubblefield/Screenshot via Funidelia).
SHARE

In news that nobody expected, a ninja recently attacked Army special operations soldiers while they were training in California.

We’re being completely serious. Now is also a good time to point out that nobody was seriously injured in the attack, and the perpetrator was subsequently arrested, Stars and Stripes first reported on Thursday.

Here’s how it all went down, according to a partial incident report that was shared on Reddit and elsewhere on social media. A spokesperson with 160th Special Operations Aviation Regiment confirmed to Task & Purpose that the incident report, pictured below, is real:

In the early morning hours of Sept. 18, an individual clad head-to-toe in ninja garb and carrying a “katana sword” approached a staff sergeant with the 160th Special Operations Aviation Regiment outside an administrative building at a hangar at the Inyokern Airport in the Mojave Desert where members of the unit were training. (A quick note for the die-hard ninja nerds who are champing at the bit to point out that the attacker should have been using a Ninjatō: Nobody cares.)

The incident report said the purported ninja approached the soldier, who was minding his own business smoking a cigarette, and asked: “Do you know who I am?” To which the staff sergeant replied “No,” though it stands to reason that his inner monologue may have gone something like this: What the fuck?

Then the master of the dark arts of ninjutsu asked: “Do you know where my family is?” and yet again, the staff sergeant replied “No.”

Let that sink in for a second. Here’s this soldier who’s just doing his thing after a long day of training with the 160th SOAR, which provides helicopter support for special operations, and then “poof” out of the cover of night a ninja emerges and asks a series of questions that sound like something Liam Neeson would say in a Taken movie.

According to the partial incident report, “at this point the person in ninja garb began slashing at [the staff sergeant], striking his phone and his knee and leg.” The soldier immediately took off running. In an effort to evade his attacker, the soldier made his way through the parking lot before jumping a fence and entering the nearby admin building.

Once inside, the soldier and a captain immediately began locking the doors and called law enforcement. The call was documented by the Ridgecrest Police Department in its daily logs, which noted on Sept. 18 that dispatchers received two calls from soldiers, one reporting that there was a man in a ninja outfit with a sword running amok, and the other stated that the soldiers were “hunkered down in a hangar wondering where help is.”

The unidentified attacker continued his pursuit, following the staff sergeant to the building where he’d taken shelter, and was “kicking and punching doors and windows,” according to the incident report. The assailant stopped for a moment and receded back into the shadows, only to return shortly thereafter and hurl a “large block of asphalt” through the window, striking the captain, before once more disappearing, this time for good.

Law enforcement a short while later and the ninja-garbed assailant was subsequently arrested, Stars and Stripes reported, though it’s unclear what agency apprehended the flight-line ninja and what charges he may face. According to the incident report and Stars and Stripes, both the staff sergeant and the captain suffered minor injuries and were cleared to return to duty.

The news that a number of Army special operations soldiers had “hunkered down” and called the police in the face of a lone ninja attacker gave rise to a number of jokes, some at the expense of the 160th SOAR.

However, it’s important to point out that while the soldiers likely could have done something — after all, this is the special ops unit that took part in the May 2011 raid that killed Osama Bin Laden — perhaps it’s best that they did not.

“We were pleased with the restraint shown by our people, and for letting the authorities handle it,” Maj. Chris Lancia, a spokesman with 160th SOAR, told Task & Purpose. “Could they have done something? Probably. Would it have made the situation better? Probably not.”

And that’s fair: Fast-roping a bunch of operators in to deal with a man in a Halloween costume would have been a disproportionate response.

Thus concludes the most bewildering news that’s cropped up this week, though it is hardly the weirdest story to cross our desks: In April, an Army major was bitten by strippers in Poland.

Update: This article has been updated with additional information from the 160th Special Operations Aviation Regiment.