Before the 5th Special Forces Group's Operational Detachment Alpha 595, before 160th Special Operations Aviation Regiment's MH-47E Chinooks, and before the Air Force combat controllers, there were a handful of CIA officers and a buttload of cash 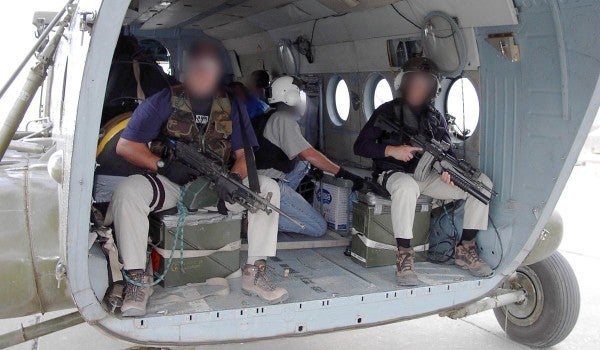 Before the 5th Special Forces Group's Operational Detachment Alpha 595, before 160th Special Operations Aviation Regiment's MH-47E Chinooks, and before the Air Force combat controllers, there were a handful of CIA officers and a buttload of cash.

The official Twitter account of the CIA posted a photo on Thursday showing a pair of heavily-armed officers perched atop ammo cans in the back of a Russian-built Mi-17 Hip helicopter on Sept. 19, 2011, just eight days after the September 11th terror attacks.

Their mission? Deliver cardboard boxes containing $3 million in cash to a handful of Northern Alliance commanders to, in turn, rally their fighters in support of U.S. forces
ahead of the multinational invasion the following month.

9/19/01: Eight days after 9/11, CIA officers pick up $3 million cash in three cardboard boxes. This money would enable the Northern Alliance (NA) commanders to pay their troops and convince other tribes to rally to the NA rather than fight them.#15Days pic.twitter.com/ykYJMKBngy

A week after this photo was taken, on the evening of, Sept. 26th, 2001, the modified Mi-17 — referred to as the “Northern Afghanistan Liaison Team (NALT)” and complete with a
black “91101” on the tail in reference to the 9/11 attacks — infiltrated northern Afghanistan under the callsign 'Jawbreaker,' a mission recounted by former CIA officer Gary Berntsen's 2005 book by the same name.

“You have one mission,” the head of the CIA counterterrorism center reportedly
instructed Berntsen, then an officer with the agency's clandestine Directorate of Operations. “Go find the al Qaeda and kill them. We're going to eliminate them. Get [Osama] bin Laden, find him. I want his head in a box. . . . I want to take it down and show the president.”

It would take more than a decade for the U.S. to finally “get” bin Laden, but Jawbreaker's initial incursion was considered a success. A month later, when the Night Stalkers finally inserted the elite contingent of Green Berets from ODA 595 and Air Force combat controllers into northern Afghanistan, they found Northern Alliance warlords and warriors
ready for a fight.

“There was a lot of emotions, excitement, amazement. It was an extreme honor. Looking back on it now, it's humbling,” Chief Warrant Officer 2 Brad Fowers
recalled of the mission in 2017. “It was a very privileged moment in our history to see how things unfolded and what so many are capable of doing.”

While the 12-man Green Beret team would become
immortalized as the legendary “Horse Soldiers,” the identities of the CIA officers pictured aboard the Mi-17 pictured are, beyond Berntsen, not publicly known.

But here's the amusing part:
in his 2005 book, Berntsen recalled that his five-man team team consisted of a former Army Special Forces captain assigned to the agency's Special Activities Division; a former Navy special warfare operator; a former Army paratrooper; and “Todd, a former Marine and the team communicator.”

Yes, you read that right:
MarineTodd, the Internet's favorite caricature of the ornery grunt, was the tip of America's post-9/11 spear. If that isn't cosmic poetry, I don't know what is.