Four Chinese citizens have been arrested over the past year for illegally taking pictures of the base, including two this past weekend 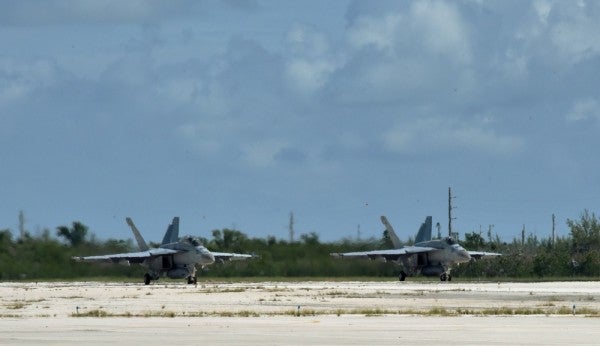 Something awesome must be happening at Naval Air Station Key West, because four Chinese nationals have been arrested over the past year for illegally taking pictures of the base, including two this past weekend.

According to court records, Yuhao Wang and Jielun Zhang drove up to an annex of the Florida installation at around 8:30 a.m. on Saturday before the Navy security forces master at arms (MA) told them they couldn't enter without military identification.

Not to be deterred by mere military security protocols, Wang and Zhang continued driving onto the annex. The MA could not leave her post, records say, so she radioed other security forces to locate the two.

About 30 minutes later, security forces found Wang and Zhang in possession of cell phones and a Nikon camera they had used to take pictures of military facilities there.

According to court records, Wang and Zhang confirmed that they did not obey instructions to turn away from the gate and they voluntarily showed investigators the photos and videos on their cameras.

Wang and Zhang had an initial court appearance on Monday and have bail hearings Friday in Key West federal court, the Associated Press reported on Tuesday.

The arrests come less than two weeks after Lyuyou Liao, was charged with illegally taking pictures at another annex at the base, according to the AP.

A fourth Chinese national, Zhao Qianli, was sentenced to a year in federal prison after pleading guilty last year to illegally taking pictures of the same base.

According to NAS Key West's website, the base is home to a sophisticated Tactical Combat Training System, which tracks and records aerial maneuvers. It also hosts Joint Interagency Task Force South and the U.S. Army Special Forces Underwater Training School.

The base is also “the state-of-the-art facility for combat fighter aircraft of all military services, provides world-class pierside support to U.S. and foreign naval vessels, and is the premier training center for surface and subsurface military operations,” according to the Defense Visual Information Distribution Service.

Whatever's going on down there, it is most definitely bringing the boys to the yard.