''We always look at collateral damage and decisions are based on that. We want zero. Mines are part of that equation" 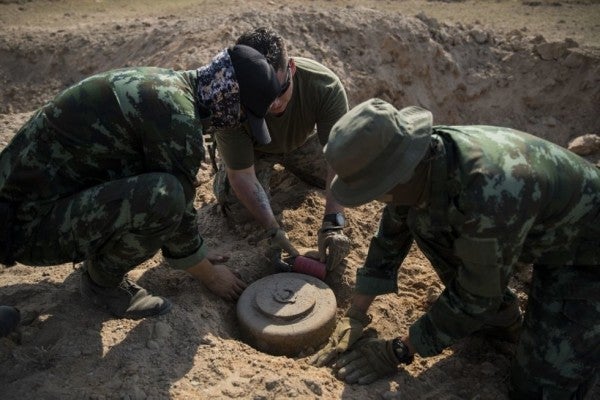 The U.S. military is now free to use land mines all over the world, but only four-star generals can include land mines in war plans and the defense secretary must personally approve deploying mines, a top defense official said on Friday.

The White House first announced on Friday that President Donald Trump had ended a 2014 policy that prohibited the U.S. military from deploying land mines outside of the Korean peninsula.

The new policy says the Defense Department can only deploy mines that are designed to self-destruct after 30 days and also have a backup deactivation system.

The GATOR mines that are currently in the U.S. military's inventory meet both criteria and have a failure rate of 6 out of 1 million, said Victorino Mercado, who is performing the duties of the assistant defense secretary for strategy, plans, and capabilities.

The Defense Department is also free to conduct research and development to make land mines that are “even better,” Mercado said during a Pentagon media roundtable.

Reporters pressed Mercado on Friday about what “exceptional circumstances” would allow U.S. military commanders to use land mines.

Mercado said that land mines would “increase our advantage” in a war against Russia or China, but he also indicated that the Pentagon could use mines for a wide range of conflicts.

However, Mercado said he did not see a need to use land mines in Afghanistan, Syria, Niger, and other warzones that don't involve a near-peer adversary.

He spoke in general terms about how land mines can “shape the battlespace,” but he repeatedly declined to describe a specific scenario in which land mines would be useful for U.S. forces.

“I don't want try to corner our commanders into what you can or cannot do because I've found in my career that every situation is different,” Mercado said. “We always look at collateral damage and decisions are based on that. We want zero. Mines are part of that equation.”