"The first days when you saw chaos on the ground, it was very challenging." 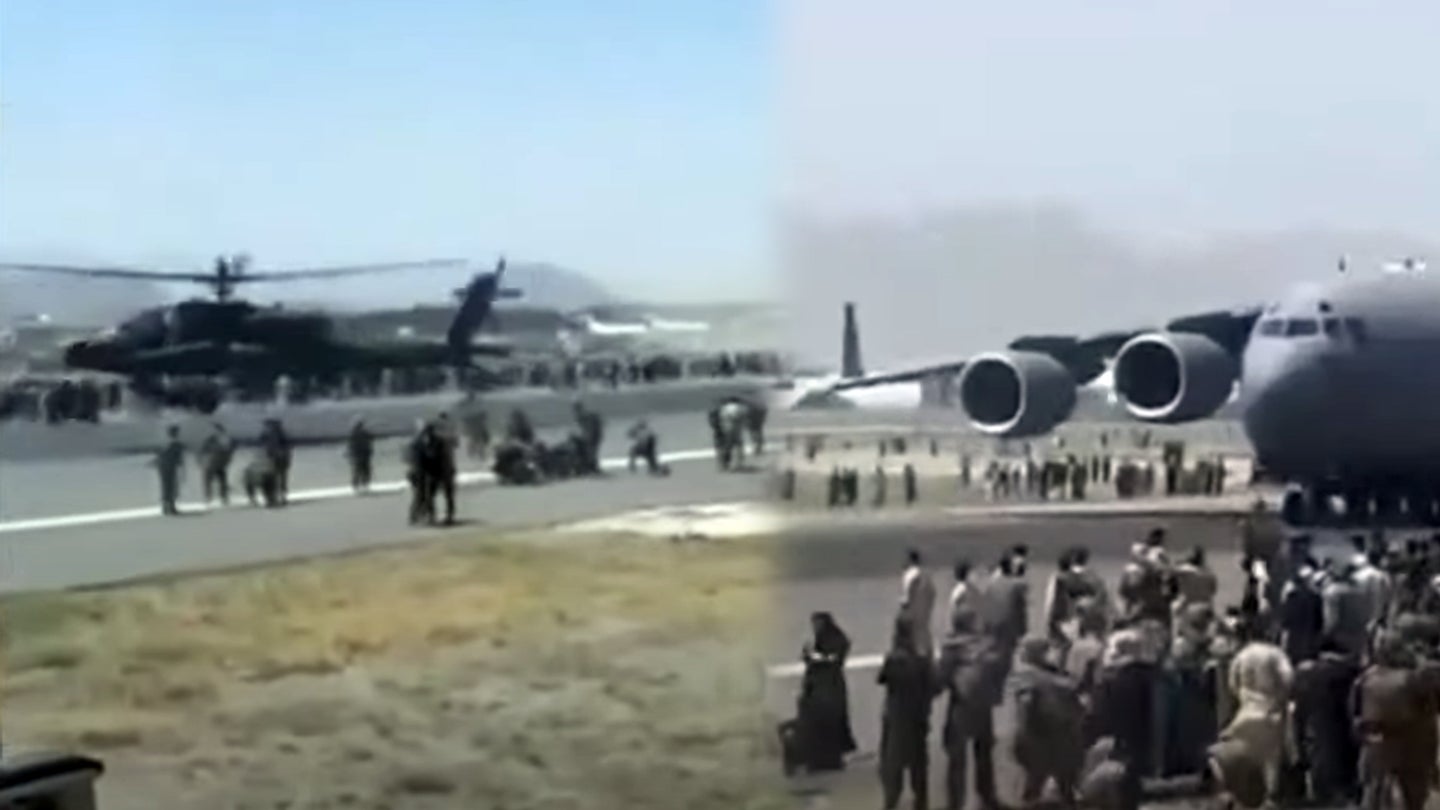 A new video has emerged showing the wider chaos that swept the Hamid Karzai International Airport in Kabul, Afghanistan on Monday from the perspective of an American soldier on the ground. From behind the turret of an M240 medium machine gun atop a mine-resistant ambush-protected (MRAP) vehicle, a soldier panned a camera around to show hundreds of Afghans lining the airport runway before two Apache helicopters flew low in an effort to clear the runway for the takeoff of an Air Force cargo plane.

Since then, thousands of soldiers and Marines have deployed to the airport and secured the perimeter. But the 48-second clip gives a broader view of what happened in the moments before other videos captured a massive C-17 Globemaster II lumbering down the tarmac as a crowd of Afghans ran alongside it, some of whom clung to the side of the aircraft and later fell to their deaths after takeoff.

Thousands of Afghans moved toward the airport after the Taliban seized Kabul on Sunday. Desperate travelers flooded the tarmac with some even climbing on top of planes. The chaotic scene continued into Monday. Another video that later surfaced showed an Afghan man had filmed himself riding on the side of an aircraft near the landing gear. The video ended before the plane took off.

The latest video appears to show several thousand Afghans trying to make their way towards the airport as American troops try to establish order. Pilots in Apaches are seen clearing runways with their rotor wash ahead of the C-17 Globemaster II as the opposite side of the tarmac is lined with Afghans. The aircraft taxis forward with fewer Afghans surrounding it, suggesting this video captured the moments after an earlier video showed the aircraft surrounded by hundreds of people.

This latest video “is the first footage from a service member we have received that was filmed by an actual service member taking part in evacuation security operations,” according to Funker530, which posted the video to YouTube. The website was started by a Canadian military veteran in 2008 and now hosts a massive video library of combat footage submitted by veterans.

Later in the video, the turret gunner films the scene as his truck moves down the runway in front of a large number of Afghans. “I’m getting a video of this,” the soldier says over what sounds like gunfire in the background.

“The first days when you saw chaos on the ground, it was very challenging,” Brig. Gen. Peter Huntley, the director of Marine Corps operations, said Thursday. Huntley said there was a brief “exchange of fire” that first day that amounted to what he called “pot shots.” A Marine from 1st Battalion, 8th Marine Regiment was “grazed” by a bullet in the leg but was patched up and returned to duty that day, he said.

“There was a relatively small number of Marines,” Huntley said. “But they were able to re-establish the perimeter at the airport. They were able to get the airfield cleared, which enabled additional forces to flow in.”