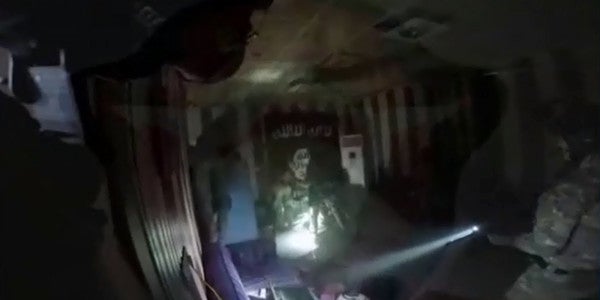 Newly released helmet-cam footage shows a raid executed Oct. 22 by American special operators and Kurdish Peshmerga fighters in northern Iraq on an Islamic State facility. The forces successfully rescued roughly 70 Iraqi men, but the mission resulted in the death of Master Sgt. Joshua Wheeler, the first American killed in action in Iraq under President Barack Obama’s new plan to train forces to defeat the Islamic State, according to the Washington Post.

Now, helmet camera footage has been released showing the American forces and the Peshmerga fighters moving through a dark facility where the men were being held. The Pentagon has said the hostages at this facility were facing “imminent mass execution” at the hands of the Islamic State, according to CNN.

The video was released by the Kurdish government. The American Delta commandos were deployed to Iraq in an “advise and assist” role when they participated on the raid to back up Peshmerga fighters who were going in to save the hostages.

Five Islamic State members were captured in the operation and “a number” were killed, Pentagon spokesman Peter Cook said, according to U.S. News & World Report.

Watch the video below. See the commandos pat down the hostages to ensure none are armed or wearing suicide vests. Check out the facility the Islamic State used to hold these hostages. Listen for the American voices.