The Pentagon is developing a proposal for deploying conventional U.S. ground troops to northern Syria to accelerate the fight against... 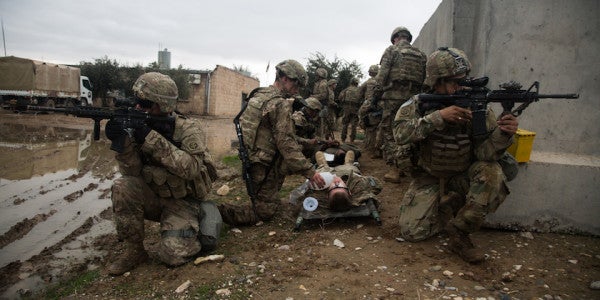 The Pentagon is developing a proposal for deploying conventional U.S. ground troops to northern Syria to accelerate the fight against the Islamic State, CNN reports. There are currently about 500 special operations soldiers working as combat advisers in the country, which is embroiled in a bloody civil war that has raged unabated since the summer of 2011.

“It’s possible that you may see conventional forces hit the ground in Syria for some period of time,” a defense official told CNN.

Meanwhile, Pentagon spokesman Navy Capt. Jeff Davis told Military Times: “We are in the process of conducting our 30-day review of the strategy to defeat ISIS as directed by the president. We are considering a number of measures to accelerate the campaign as part of that review, but no decisions have been made.”

The Department of Defense has not yet specified the exact number of troops being considered for the proposed surge, but CNN notes that a deployment of conventional forces would likely result in a significantly increased military footprint in northern Syria, a region largely controlled by Kurdish forces.

The U.S. commandos currently operating in Syria are mostly working in small teams embedded with anti-ISIS groups. A less-agile contingent of conventional troops would probably require the construction of large forward operating bases, as well as an increase in ground and air support that would give the American military a much more visible presence on the battlefield.

Of course, the Pentagon’s proposal would need to be approved by President Donald Trump, who has repeatedly vowed to ramp up the fight against ISIS. Under the Obama administration, U.S. military involvement in Syria was limited to a combination of air strikes, missions to train and advise, and the occasional direct action raid. So far, one American service member has been killed in action in Syria.

A spokesman for U.S. Central Command told Military Times that no deployment announcements are imminent; however, the publication also reports that multiple Army sources “indicated that about two thousand soldiers with the 82nd Airborne Division’s 2nd Brigade Combat Team soon may bolster other Army elements already in the region.” Whether that means Syria or Iraq, where about 5,000 U.S. troops are currently deployed, remains to be seen.

CNN also notes that while Defense Secretary James Mattis was not asked about putting more troops in Syria during his confirmation hearing, he was asked how U.S. military efforts in Iraq and Syria would change under his watch. His response: “I think it’s getting there as rapidly as possible, where it would be a more accelerated campaign.”