Kill it with fire. 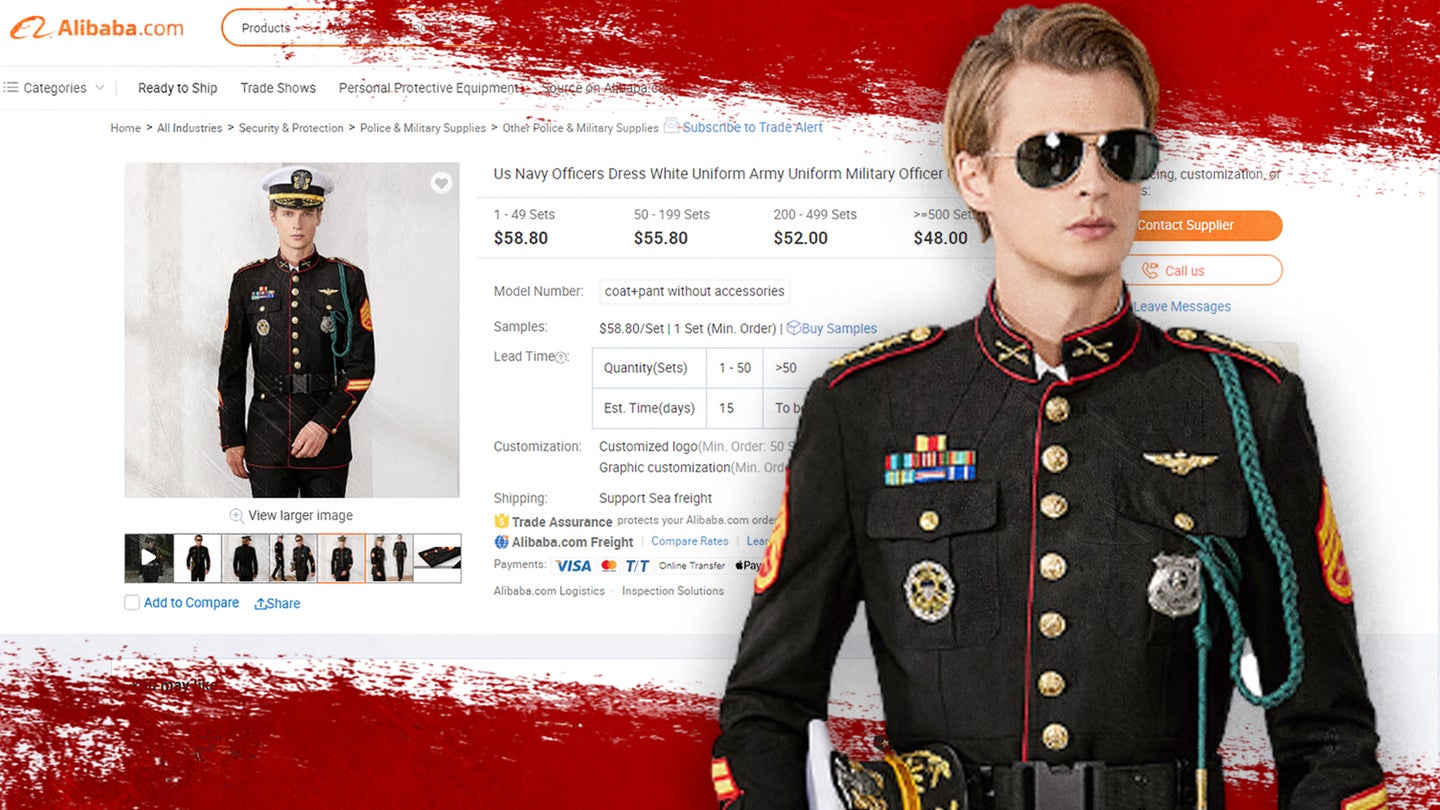 Just when you think you’ve seen all there is to see on the internet — from tacticool swag that screams “I wanted to join the military, but…” to someone pranking a bunch of retired generals as ‘Rear Adm. Jack Meehoff’ — the internet provides:

Yes, this misbegotten outfit is real, and it’s for sale.

This sampler platter of stolen valor looks like a clothing line forged from ridiculous military stock photos: It is officially titled “Us Navy Officers Dress White Uniform Army Uniform Military Officer Uniform.” Or is it called “Full set stand collar navy sailor captain uniform for officer uniform?” It’s hard to know since there are two awkwardly capitalized and spelling error-riddled landing pages for the same outfit on Alibaba.com, an online market that mostly sells Chinese-made goods. It appears the uniforms can only be purchased in batches and range in price starting at $58.80.

As for what you’d be purchasing? All of this:

That’s not all! Not only will you take home a “shield badge,” and a “two knives necktie,” you’ll also be the proud recipient of a pound of useless paperweights, shame, the mockery of complete strangers, more shame, and the chance to become a meme!

Now, contrary to what the product page says — and I can’t believe I have to state this — hardly any of those items belong on that uniform. So, let’s break down everything that’s wrong with this so-called U.S. “military officer uniform.”

For starters, this outfit features an enlisted Marine Corps Dress Blue jacket, but it includes black trousers instead of the blue ones that are normally worn with that uniform, and there’s no blood stripe running along the pant legs.

As for who this guy is — with his Johnny Bravo-esque hair and his Maverick aviator sunglasses — he’s apparently a staff sergeant admiral, or maybe he’s a four-star staff sergeant? Perhaps a staff general sergeant? It’s hard to say because he has four stars on his uniform, and staff sergeant’s rank, but you can’t be both an enlisted Marine and a flag officer at the same time.

Which brings me to his hat, which is not a Marine Corps Dress Blue cover, but instead looks like he stole it from a Navy flag officer — along with those stars — given the fistful of gold oak leaf clusters on the brim, often called “scrambled eggs.”

There’s also the smattering of random awards, including one that appears to be an Army Reserve Components Overseas Training Ribbon, among several others that when taken together make the ribbon rack look like he stuck a bunch of Home Depot paint swatches to his chest, on the wrong side, and called it a day.

Rounding out the ensemble are a bunch of random badges and adornments that makes me think this outfit was assembled using a grab bag of uniform items from the base exchange. There’s a “Security Officer” badge that was likely plucked from a Halloween costume, although, hell, maybe that’s real — I’m questioning my sanity at this point. Then there’s the failed attempt to slap on a French Fourragere, which is worn by members of the 5th and 6th Marine Regiments for the units’ service during World War I at the Battle of Belleau Wood. But unlike the one in the photo, the actual Fourragere is dark green in color with thin red bands running horizontally along the length of it.

Hmm, what else? Oh yeah, there’s a Naval Aviator Badge and a Joint Chiefs of Staff Badge — because why the hell not? — and a pair of U.S. Army Cavalry Crossed Sabers on the collar. And last but not least, the utility belt, which would look more at home around Batman’s waist than here.

And that about does it. Just a couple of minor issues, really.

Now, if you’re wondering who this purveyor of mil-spec cosplay is, and more to the point, who’s to blame for unleashing it on the world, you’re not alone. Fortunately, there’s a helpful video from the company entitled “What is Alibaba.com?” According to that video, the company is an online market founded in 1999 as a “sourcing platform with a directory of mostly Chinese manufacturers.” The fact that it’s an e-market based in China might help explain its use of trademarked U.S. military uniform items, like the Marine Corps’ staff sergeant rank insignia.

In the case of Alibaba.com’s “military officer uniform,” a Marine Corps spokesman told Task & Purpose that the company did not have permission to use the service’s trademarks.

“The USMC Trademark Licensing Office does not license any textile products from China due to the increased risk of child and forced labor in the manufacturing process,” said Marine Capt. Andrew Wood. “The U.S. military-themed apparel product currently being offered for sale on Alibaba is listed as being manufactured by the Shenzhen Tenghang Garment Co., Ltd, China. The product is clearly unlicensed and it is possible any orders of this particular infringing product coming in from China will be identified [and] confiscated by U.S. Customs and Border Protection.”

However, online markets are particularly difficult to police for trademark violations, and trying to get infringing items taken down is a lot like playing whack-a-mole, as Task & Purpose previously reported.

So as cringeworthy as the uniforms might be, it’s unlikely they’ll be disappearing from the internet any time soon, but hey, at least we got to correct the record on everything wrong with this one.

And as you can clearly see, there was a lot.

If we did happen to miss anything, please hop in the comment section and let us know.