Marines are testing a new scope that ‘locks on’ target

Nobody cares that you shot with iron sights. This is freaking awesome. 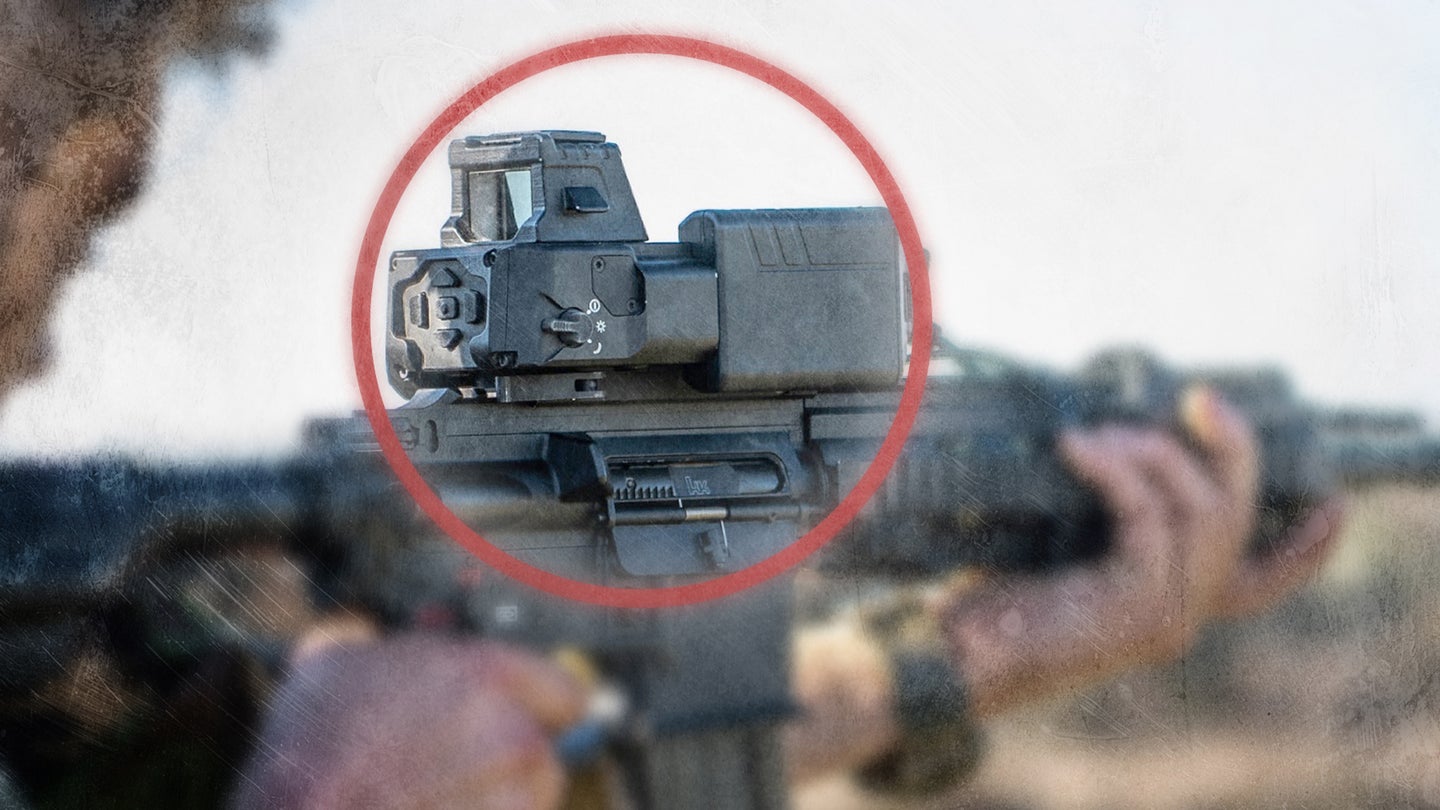 An unidentified tester takes aim with Smart Shooter's SMASH 2000 optic, which allows troops to lock onto targets and will tell them when their chances of hitting their mark are at their highest. (Courtesy photo by Fred Warmer via Smart Shooter).
SHARE

Marine Corps and Navy officials will test an advanced fire control system that calculates how troops can best hit their targets as part of ongoing efforts to defend against enemy drones on land and at sea, the Israeli firm that builds the system has announced.

Smart Shooter Ltd. Is the maker of the SMASH Fire Control System, which can be added to any type of military rifle, the company said in a news release.

“The Marine Corps Warfighting Lab (MCWL) evaluates candidate technologies to fill capability gaps; one of which is small, hostile drones against our front-line Marines in the close-in fight, said Jessica Hanley, a spokeswoman for Combat Development and Integration. “As a part of its market research work, the Marine Corps Rapid Capabilities Office (MCRCO) is evaluating the SMASH 2000L as a candidate solution identified for its current ability to target, track, and fire at the optimal point to eliminate small hostile drones.”

“Featuring built-in targeting algorithms that can track and hit even very small drones, SMASH fire control systems put a precision anti-drone capability at the fingertips of its users,” the news release says.

The Marines will receive several SMASH 2000 systems this fall for testing. Both the Army and U.S. Special Operations Command have already looked into how the system can be used against enemy drones.

The SMASH systems include a mounted optic and pistol grip that allow troops to lock onto a target and only fire “when it’s a guaranteed hit,”  Devin Schweiss of Smart Shooter’s American subsidiary said during SHOT Show 2000 last year in Las Vegas.

“Once you’ve locked on the target and you engage the fire control function, it will automatically calculate the ballistic solution to the target, but the round will not release until you have a 100% solution,” Scott Thompson, vice president and general manager of U.S. operations for Smart Shooter, said on Tuesday.

Troops can unlock the target if circumstances require doing so, Thompson said.

The sight weighs about 2.6 pounds and the system has a rechargeable battery that is designed to last for 72 hours, according to Smart Shooter. In sample tests, novice and experienced shooters were able to hit a moving target  with their first round 80% of the time from standing an unsupported fire positions. Using the current red-dot system, none of the novice shooters and only 20% of experienced shooters achieved the same results.

Drones can be used by terrorist organizations such as the Islamic State group and nations. Iran in particular has been accused of using drones to attack Saudi Arabia’s state-controlled oil company and an Israeli-operated merchant tanker.

In July 2019, the amphibious assault ship USS Boxer was in the Strait of Hormuz when two Iranian drones came dangerously close to the vessel. Military.com first reported that the Marines aboard the Boxer used a dune buggy drone jammer to down at least one of the drones.

“With an increased hit probability for small unmanned aerial systems (sUAS) and increased engagement range, Smart Shooter’s SMASH technology has demonstrated the potential to increase the Navy’s ability to engage sUAS at the individual level – using existing weapons and ammunition in inventory,” the news release says.

Unmanned aircraft pose a threat to ground forces as well as ships. In 2017, ISIS fighters used commercially purchased drones to drop small explosives on Iraqi troops during the battle for Mosul.

Hence the need for a weapons system that will allow ground troops to better defend themselves against drone attacks. In May 2020, U.S. special operators at the Al Tanf garrison in southern Syria were shown in pictures using the SMASH 2000 system as they fired at a target suspended from a small quadcopter drone.

U.S. Special Operations Command ultimately decided not to field the SMASH system after a Combat Evaluation determined the system “only provided a limited enhanced capability beyond what is provided with current SOF optics,” said SOCOM spokesman Ken McGraw.

However, the Army announced in June 2020 that it had picked Smart Shooter as one of the companies that will provide the service with interim defenses against drones. Marine Gen. Kenneth McKenzie Jr., head of U.S. Central Command, has described the rapid proliferation of cheap commercially available drones as “the most concerning tactical development since the rise of the improvised explosive device in Iraq.”

UPDATE: This story was updated on Oct. 6 with comments from Ken McGraw, a spokesman for U.S. Special Operations Command.