After years of delays and cost increases, the Army has officially pulled the plug on the XM25 Counter-Defilade Target Engagement... 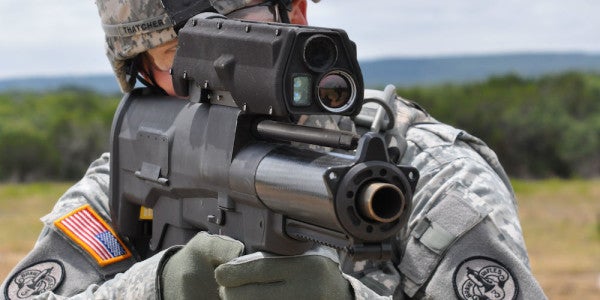 Originally touted as a “leap-ahead” enhancement to soldiers' arsenals in Afghanistan, the XM25 semi-automatic weapon that uses a target acquisition and fire control system to identify targets, determine range, and program specially-designed, high-explosive ammunition to explode in proximity to enemies nearly 2000 feet away

The program has been in limbo since May 2017, when the Army's senior leadership canceled its contract with Orbital ATK after the defense firm “failed to deliver the 20 weapons as specified by the terms of the contract,” as service spokesman told Military.com at the time.

The Punisher was doomed well before that. The Department of Defense's Office of the Inspector General released a report in September 2016 urging the Army to cancel the program due to “two years of delays, increased program costs, and an unjustified fielding plan,” per Military.com. Indeed, the OIG report for the system frequently malfunctioned during operational testing:

Orbital and H&K; aren't totally to blame: as with all other future weapons systems, Army officials “could have managed the schedule, affordability, and quantity requirements of the XM25 program more effectively,” according to the DoD OIG audit.

RIP 'The Punisher.' We're sure you'll find a second life in the reboot ofDemolition Man.