One of the drones had the words “Soleimani’s revenge” written on it. The other had “revenge operations for our leaders.” 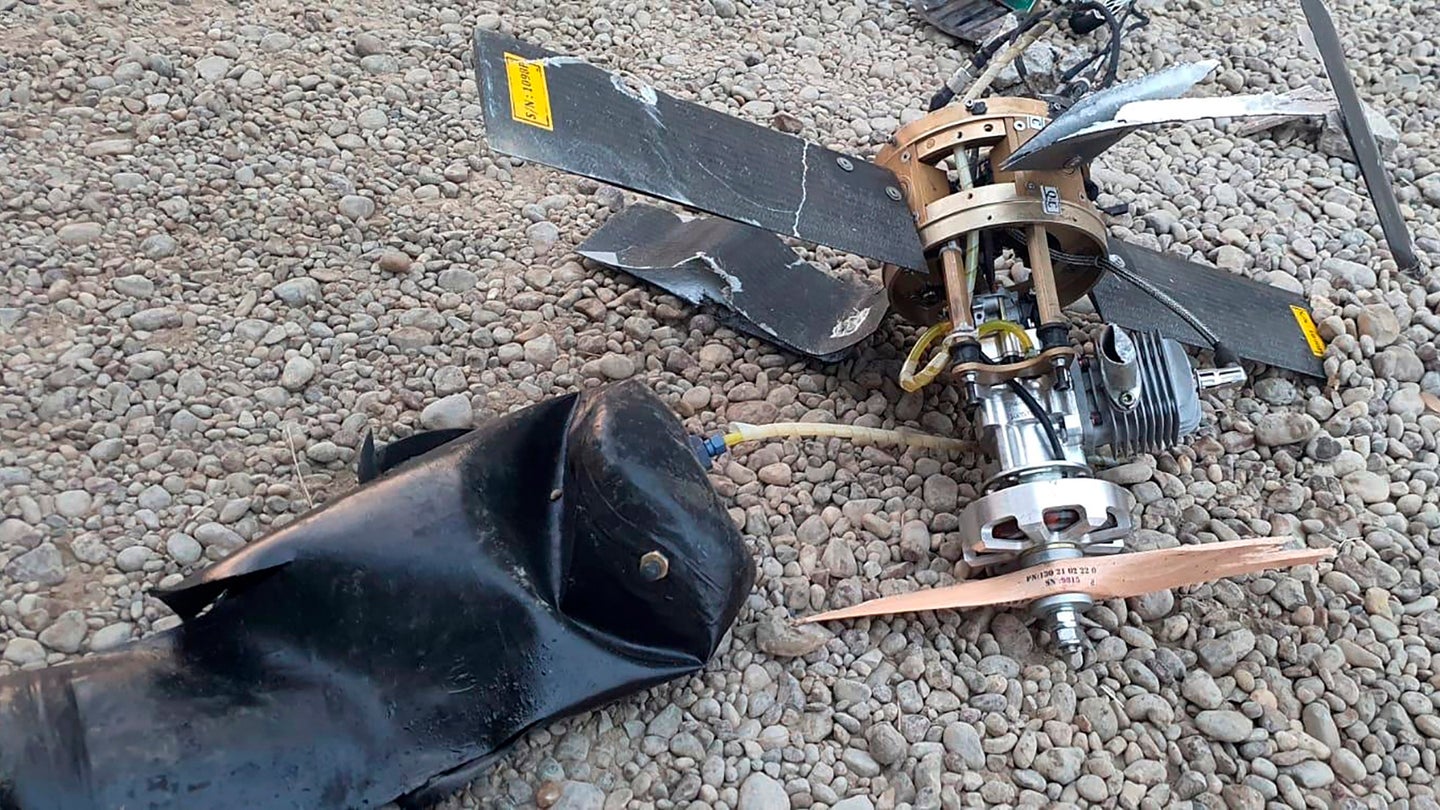 The wreckage of a drone is seen at Baghdad airport, Iraq, Monday, Jan. 3, 2022. Two armed drones were shot down at the Baghdad airport on Monday, a U.S.-led coalition official said, an attack that coincides with the anniversary of the 2020 U.S. killing of a top Iranian general. (International Coalition via AP).
SHARE

Two armed drones were shot down Monday near Baghdad’s international airport, according to multiple news reports. The drones were reportedly approaching a military base near the airport that houses U.S. troops.

An unnamed security official with the U.S.-led coalition in Iraq told Reuters that, “two fixed-wing suicide drones” were shot down without incident, and described the incident as a “dangerous attack on a civilian airport.”

There were no reports of any injuries or damage from the incident, according to an Iraqi security official who confirmed the incident to the Associated Press. The drones were engaged by the C-RAM defense system that is deployed to Baghdad to provide security against aerial attacks.

The foiled attack falls on the second anniversary of the 2020 drone strike that killed Maj. Gen. Qasem Soleimani, the head of the Iranian Revolutionary Guard Corps’ Quds Force. That bombing, which also occurred near Baghdad’s international airport, also killed Abu Mahdi al-Muhandis, the leader of an Iran-backed militia in Iraq. Ordered by then-President Donald Trump, the Pentagon said that the strike was in response to months of attacks on coalition forces in Iraq by Soleimani’s forces.

“General Soleimani and his Quds Force were responsible for the deaths of hundreds of American and coalition service members and the wounding of thousands more,” said a Pentagon statement following the 2020 drone strike, adding that, “This strike was aimed at deterring future Iranian attack plans. The United States will continue to take all necessary action to protect our people and our interests wherever they are around the world.”

While no one has yet claimed responsibility for the attempted drone strike, footage of debris provided by coalition and Iraqi security officials showed the wings of the drones marked with the words “Soleimani’s revenge.” Another reportedly had “revenge operations for our leaders,” written on it.

The attack comes at a time of heightened tensions between Iran and the United States. In the immediate aftermath of the 2020 attack that killed Soleimani, Iran launched a missile attack on U.S. forces stationed at Al-Asad Airbase and Irbil. More than 100 soldiers suffered traumatic brain injuries, and 29 soldiers were later awarded Purple heart medals for injuries received in those attacks. In March of that year, a rocket attack on Camp Taji carried out by Iranian-backed militia forces killed two American service members.

Since then, the two sides have continued to trade blows, with the U.S. forces repeatedly carrying out retaliatory strikes against Iranian-backed targets in Iraq and Syria.

On Saturday, hundreds rallied in Baghdad on the eve of the anniversary of Soleimani’s death, the Associated Press reported. With placards reading “We will not let you stay after today on in the land of the martyrs,” they called for the immediate expulsion of all remaining U.S. forces in Iraq. While the U.S.-led coalition combat mission against the Islamic State ended in early December, roughly 2,500 personnel remain in the country in an advisory role to Iraqi forces.

The Iranian government has also continued to publicly call for punishment for U.S. officials involved in the 2020 strike on Soleimani. On Sunday, Iran addressed a letter to the United Nations Security Council urging members to hold the U.S. and Israel accountable for the attack. The next day, Iranian President Ebrahim Raisi doubled down, saying that Iran would continue to seek revenge for the attack until former President Donald Trump was placed on trial for his actions.

“If Trump and (former secretary of state Mike) Pompeo are not tried in a fair court for the criminal act of assassinating General Soleimani, Muslims will take our martyr’s revenge,” Raisi said on Monday.