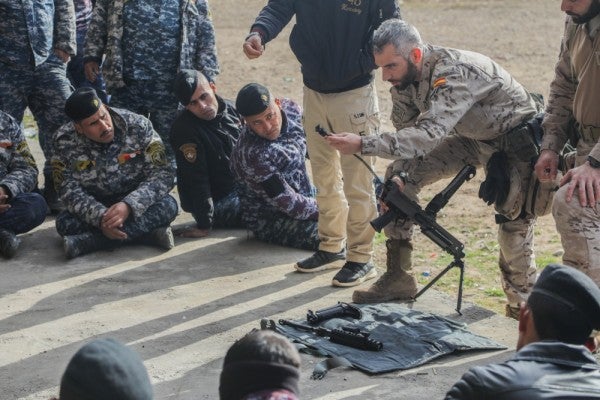 The move coincides with a drawdown announced this week of coalition troops in Iraq, as Iranian-backed militias step up rocket attacks on bases hosting foreign forces. Two U.S. military personnel and a British soldier were killed in an incident this month.

Coalition officials say the reduction of troops and relocation of units into fewer Iraqi bases is because Iraqi forces are mostly capable of containing the threat from remaining Islamic State militants on their own.

The U.S.-led coalition has supported the Iraqi military since 2014 in the fight against Islamic State.

Since the Sunni Muslim extremist group’s defeat in Iraq in 2017, U.S.-Iranian tension has put the coalition increasingly in the crosshairs of Shi’ite militia groups backed by Tehran.

Training was set to resume in full but coronavirus fears have halted it again, said the coalition military official, who spoke to reporters on condition of anonymity.

The official said Iraqi forces had stopped training because they were avoiding large gatherings to prevent infection and that was affecting what U.S. forces were doing as part of their mission.

Coalition training “isn’t happening because of the health risks associated with it”, the official said, adding that some coalition trainers had left Iraq. He said it was not clear when training would resume.

Iraq has recorded 177 cases of the disease including 12 deaths, the health ministry says.

The U.S.-led coalition withdrew from a base at al-Qaim on the border with Syria this week, saying in a statement it would relocate personnel and equipment from several Iraqi bases this year, without elaborating.

“We’re going to focus … on supporting the Iraqi security forces in their efforts against Daesh (Islamic State) from fewer bases and with fewer people,” the official said.

The coalition currently deploys around 7,500 troops in Iraq, including 5,000 Americans.