According to a widely accepted story, in 1813, there was a man from Troy, New York, whose name was Samuel... 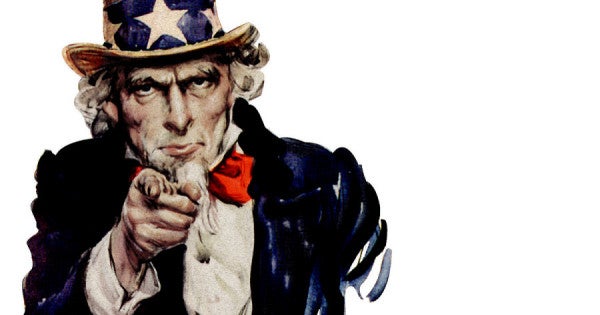 According to a widely accepted story, in 1813, there was a man from Troy, New York, whose name was Samuel Wilson. During the War of 1812, he worked as a meatpacker, distributing beef to the U.S. Army. When the meat was packaged, Wilson would stamp the barrels with “U.S.” for United States. However, soldiers soon started referring to the beef as “Uncle Sam’s.”

The designation stuck, and “Uncle Sam” was born as a nickname for the federal government.

Around the Civil War, popular political cartoonist Thomas Nast began developing a personification of Uncle Sam. He has also been credited with the creation of Santa Claus, the Democrats’ donkey, and the Republicans’ elephant.

Though Nast went through several iterations with Uncle Sam, he finally settled on dressing a comically lanky man in red and white striped pants, a blue coat, and a top hat.

However, the version of Uncle Sam that we know today was drawn by a man named James Montgomery Flagg.

Flagg’s version features a darker Uncle Sam, pointing at the viewer, staring into their eyes. He wears a top hat adorned with stars, a red tie, and a blue coat. It was originally published on the cover of “Leslie’s Weekly” on July 16, 1916, with the title “What Are You Doing for Preparedness?”

The “I Want You For U.S. Army” poster was designed in response to the military’s need to recruit soldiers to go to battle during World War I in 1917.

More than four million copies were printed over the course of the war.

Because of its popularity, it was then recycled during World War II again for recruiting purposes, and it has since been solidified as one of the most recognizable icons in American history.

Watch how the United States was nicknamed Uncle Sam.