On Friday, weapons manufacturer Steyr Arms filed a patent infringement case against Sig Sauer alleging that the latter’s P250 and... 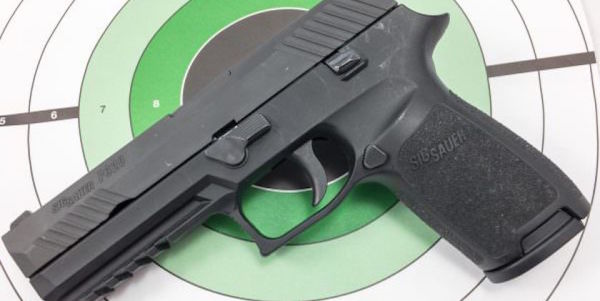 The P320, which recently won the U.S. Army's Modular Handgun System competition, was adopted by the Army as the M17 back in January. Troops with the 101st Airborne Division at Fort Campbell in Kentucky will receive the new sidearm first.

It’s likely that the extremely lucrative and prestigious $580 million Army contract for a projected 300,000 pistols has made Sig a target for rival manufacturers: Steyr's challenge comes hot on the heels of Glock's Government Accountability Office protest lodged in February, which is still ongoing.

The P320/M17's key feature is its fiberglass-reinforced, polymer grip-frame module, which acts as the weapon’s lower frame. The modular polymer chassis allows the pistol's slide and trigger pack to be fitted to frames with different grip profiles. This system offers much improved modularity over the Beretta M9 currently used across every branch in the service.

However, Steyr Arms claim that they hold the patent rights to this chassis system. Here's an excerpt from their patent titled, “Pistol, Whose Housing Is Composed Of Plastic,” filed in August 1999, and granted in July 2001:

“The pistol comprises a housing composed of plastic and a barrel slide… as well as a trigger mechanism. In order to allow plastics technology to be used… a single multifunction part, which is composed of metal, is inserted removably into the housing, on which multifunction part the guides for the barrel slide are formed and in which the elements of the trigger mechanism are mounted and guided.”

This description is very similar to the removable internal stainless steel frame used by the P320/M17, though Steyr's patent was originally filed to protect elements of their Steyr M semi-automatic pistol series.

Sig is not the only manufacturer Steyr claims have infringed its patent. In September 2015, Steyr filled a similar complaint against Beretta USA, claiming that the .380 ACP Pico pistol, which uses a “serialized modular chassis,” wilfully and deliberately infringes on the manufacturer’s intellectual property without a license. This case is still ongoing and presumably now also encompasses Beretta's own MHS entrant, the APX, which also uses a modular frame system similar to the P320/M17's.

In the complaint filed with the U.S District Court for the Northern District of Alabama, Southern Division (where the company’s U.S. factory if based), Steyr is demanding preliminary and permanent injunctions against Sig Sauer to prevent them from selling the infringing pistols.

It seems from the opening court documents filed by Steyr that the company have a compelling case, but patent infringement cases can take months or years to be settled. How this will impact on SIG's contract with the U.S. Army to supply the M17 is unclear. It is likely that Steyr is seeking a lucrative financial settlement in return for a licensing agreement.

Task & Purpose has approached Steyr Arms for comment on the lawsuit, however, but did not receive a response at time of publication.