What’s even better than owning a commercial version of the U.S. Army’s brand new, highly controversial sidearm? Owning a commemorative... 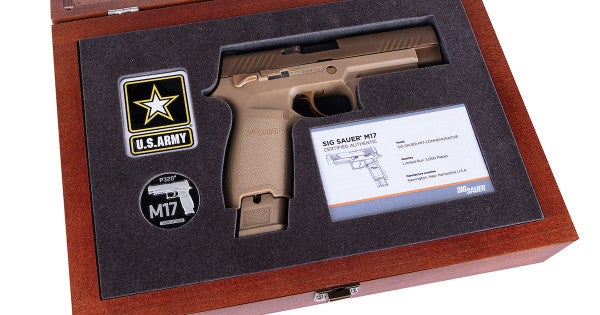 What’s even better than owning a commercial version of the U.S. Army’s brand new, highly controversial sidearm? Owning a commemorative version, of course!

Less than a week after unveiling a public variant of the Army’s 9mm M17 pistol — dubbed the P320-M17 after both the Army designation and the original P320 it was based on — Sig Sauer announced that it will release some 5,000 Commemorative Edition versions of the M17 to lucky civilians.

While the P320-M17 offered a few distinct departures from the Army’s M17 at the low, low price of $768, the commemorative versions were designed to “emulate the look and feel of the service pistol in the civilian world,” per Guns.com.

Serialized with the numbers M17-0001 through M17-5000, each commemorative pistol comes with commemorative goodies: a certificate of authenticity, a challenge coin with a matching serial number, and a cherry wood collector’s case with a glass top and the Army logo. In Sig Sauer’s telling, it’s a little piece of history that can be yours for just $1,122.

“The U.S. Army’s selection of the M17 earned the Sig Sauer P320 a place in history. It’s regarded as one of the world’s most influential firearms as it enters service with America’s Armed Forces across the globe,” Sig Sauer CMO Tom Taylor said in an extra press-releasey press release. “We are excited that collectors and civilians have an opportunity to participate in this history.”

Not wrong! Besides, the M17 certainly made a splash in the course of its development, from patent infringement lawsuits to alarming testing reports (since rebutted by both the Army and Sig Sauer) to fiery opposition from fellow Modular Handgun System challenge competitors to worries about accidental discharges in civilian variants. Perhaps when Taylor said in a release that the M17 marks “the culmination of Sig Sauer’s steadfast commitment to providing the military with the very best, and our determination to never settle,” he was talking about the procurement process.

Either way: Cherry wood case! And an Army insignia! I can think of at least 5,000 civilians who would want to show this off, so perhaps put this on your holiday shopping list — you know, just in case. After all, civilians love to commemorate a rough procurement process!