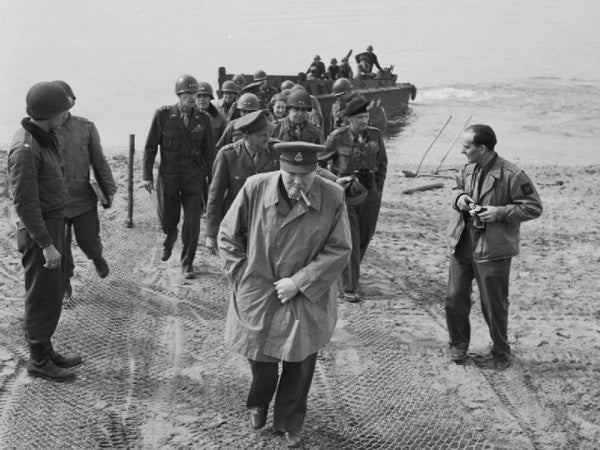 Churchill rose to power as prime minister in 1940, following the resignation of Neville Chamberlain. The Second World War was already underway — Churchill assumed office just before France fell to the Nazis — and Churchill positioned his nation not just for war, but for a threat to Great Britain’s very existence. German military leaders regularly launched air campaigns on British targets across the English Channel, and created plans to invade England, contingent on air and naval control of the English Channel that they were never able to secure.

He led Britain through the end of the war, until his conservative party lost re-election in 1945. Six years later, Churchill would once again be elected prime minister, and served in that role from 1951 until this date on 1955, when he retired.

He understood the cost of war as well as any political leader, not just from having beat back the threat of the Nazis, but in having to lead his country through a formative post-war rebuilding period six years after the war.

Consider this quote from Churchill on warfare:

“Never, never, never believe any war will be smooth and easy, or that anyone who embarks on the strange voyage can measure the tides and hurricanes he will encounter. The statesman who yields to war fever must realize that once the signal is given, he is no longer the master of policy but the slave of unforeseeable and uncontrollable events.”

His perspective is remarkable and speaks to his character as a leader — the ability to understand the limit of your own brilliance, particularly when the lives of your countrymen are on the line. His quote reflects his perspective as a servant to his people and to the national security of his country. It stands in stark contrast to political failures of some of America’s modern wars. Consider Churchill’s quote next to former Vice President Dick Cheney professing that the U.S. military would be greeted as liberators in the days before the 2003 invasion of Iraq. Asked by then-Meet the Press moderator, the late Tim Russert, about allegations of American imperialism, Cheney replied, “my belief is we will, in fact, be greeted as liberators.” Of course, Cheney was proven quite wrong; a fierce counter insurgency fight followed America’s invasion, thousand of American lives were lost, and 12 years later, Iraq is still hobbled by Islamic Extremist groups that emerged to fight the American presence there. It’s an incredible illustration of the hurricanes and tides expressed through Churchill’s quote, and the inability of American leaders in 2003 to grasp how little control they had over the fate of the war.

A military veteran himself, Churchill served in overseas posts across the British empire prior to his political career, which started as a member of parliament. Churchill is widely recognized as one of the most formative figures in 20th century politics, voted the greatest Briton of all time in a 2002 poll. And he has a storied history as a staunch American ally who worked closely with American leaders to beat back the Axis powers. This closeness is illustrated through his status as the first person to ever be named an honorary citizen of the United States, as he was in 1963, just two years before his death.