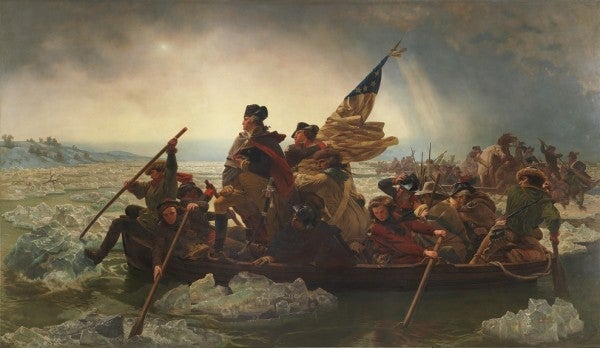 On Sept. 19, 1796, Philadelphia's American Daily Advertiser published president George Washington’s farewell address. In the letter, Washington — who near the end of his second term announced his intention to decline a third term in public office — offered his thoughts, concerns, and hopes for the fledgling nation he helped create.

The letter, originally titled “The Address of General Washington To The People of The United States on his declining of the Presidency of the United States,” was quickly republished across the country in newspapers and pamphlets, with the title later changed to “Farewell Address.”

Washington wrote the first draft with the help of James Madison in 1792 when he intended to step down after a single term in office. However, Alexander Hamilton, his secretary of the treasury, and Thomas Jefferson, secretary of state, convinced him to stay on for a second term in order to ease tensions between the Federalist and Republican parties.

At the time Great Britain and France were engaged in an ongoing conflict in the wake of the French Revolution, and American Federalists were trying to foster support for a stronger relationship with Great Britain, while Republicans supported ties with France.

A portrait of president George Washington.Image via Wikimedia Commons.

The letter includes words of warning about the meddling of foreign powers, the danger posed by overburdening the country in foreign debt, and the importance of a national identity, rather than one based on individual states. Washington also encouraged Americans to invest in education as the foundation for a moral nation, and apologized for any mistakes he might have made during his presidency.

At the heart of the speech is the first president’s conviction that the American people should put their faith in the newly founded constitutional government, and in the idea that it is the people’s right to alter their government, but only through constitutional amendments.

Here are a few highlights from the farewell address of America’s first president:

A unified nation benefits all states.

“Citizens, by birth or choice, of a common country, that country has a right to concentrate your affections. The name of American, which belongs to you in your national capacity, must always exalt the just pride of patriotism more than any appellation derived from local discriminations. With slight shades of difference, you have the same religion, manners, habits, and political principles. You have in a common cause fought and triumphed together; the independence and liberty you possess are the work of joint counsels, and joint efforts of common dangers, sufferings, and successes. … In this sense it is that your union ought to be considered as a main prop of your liberty, and that the love of the one ought to endear to you the preservation of the other.”

There is a difference between strength of arms and a large military establishment.

“While, then, every part of our country thus feels an immediate and particular interest in union, all the parts combined cannot fail to find in the united mass of means and efforts greater strength, greater resource, proportionably greater security from external danger, a less frequent interruption of their peace by foreign nations … Hence, likewise, they will avoid the necessity of those overgrown military establishments which, under any form of government, are inauspicious to liberty, and which are to be regarded as particularly hostile to republican liberty.”

Both hostilities and relationship with foreign nations should be approached with care.

“The nation which indulges toward another an habitual hatred or an habitual fondness is in some degree a slave. … As avenues to foreign influence in innumerable ways, such attachments are particularly alarming to the truly enlightened and independent patriot. How many opportunities do they afford to tamper with domestic factions, to practice the arts of seduction, to mislead public opinion, to influence or awe the public councils. Such an attachment of a small or weak towards a great and powerful nation dooms the former to be the satellite of the latter.”

A unified nation is far stronger than an alliance of independent states.

“To the efficacy and permanency of your Union, a government for the whole is indispensable. No alliance, however strict, between the parts can be an adequate substitute; they must inevitably experience the infractions and interruptions which all alliances in all times have experienced. … This government, the offspring of our own choice, uninfluenced and unawed, adopted upon full investigation and mature deliberation, completely free in its principles, in the distribution of its powers, uniting security with energy, and containing within itself a provision for its own amendment, has a just claim to your confidence and your support.”

An educated nation is an enlightened and moral one.

“Promote then, as an object of primary importance, institutions for the general diffusion of knowledge. In proportion as the structure of a government gives force to public opinion, it is essential that public opinion should be enlightened.”

Power must be tempered by humility.

“Though, in reviewing the incidents of my administration, I am unconscious of intentional error, I am nevertheless too sensible of my defects not to think it probable that I may have committed many errors. Whatever they may be, I fervently beseech the Almighty to avert or mitigate the evils to which they may tend. I shall also carry with me the hope that my country will never cease to view them with indulgence; and that, after forty five years of my life dedicated to its service with an upright zeal, the faults of incompetent abilities will be consigned to oblivion, as myself must soon be to the mansions of rest.”

When the most powerful man in the country is excited to return to life as a private citizen, you’re doing something right.

“I anticipate with pleasing expectation that retreat in which I promise myself to realize, without alloy, the sweet enjoyment of partaking, in the midst of my fellow-citizens, the benign influence of good laws under a free government, the ever-favorite object of my heart, and the happy reward, as I trust, of our mutual cares, labors, and dangers.”