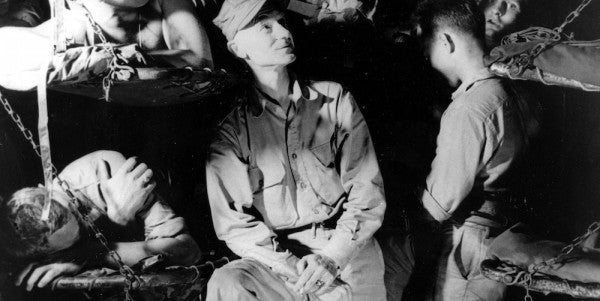 Pyle was a household name for reporting on the lowest ranking grunts fighting under atrocious conditions, as well as the underappreciated support troops performing vital and technical tasks in the rear. He gained tremendous respect among his subjects by joining them in battle and partaking in their misery. To Pyle, every anonymous G.I. had a hilarious or horrifying anecdote worth sharing with the civilians on the homefront. He even published the full addresses of each interviewee as a shout-out to their small hometowns and proud families and neighbors.

In 1944, Pyle won a Pulitzer Prize for his war coverage. On April 18, 1945, he was killed instantly by Japanese machine gun fire on the Pacific island of Ie Shima, at the age of 44.

Below is a selection of some of Pyle’s best quotes, many of which ring true among today’s veterans of multiple tours in Iraq and Afghanistan. They can be found in his books, “Here is Your War” and “Brave Men,” which were compiled from his wartime columns, as well as the website of The Media School at Indiana University, where Pyle had been a student before the war.

1. How a frontline soldier is different.

“All the rest of us—you and me and even the thousands of soldiers behind the lines in Africa—we wanted terribly yet only academically for the war to be over. The front-line soldier wanted it to be terminated by the physical process of his destroying enough Germans to end it. He was truly at war. The rest of us, no matter how hard we worked, were not. Say what you will, nothing can make a complete soldier except battle experience.”

2. The face of constant combat.

“They were young men, but the grime and whiskers and exhaustion made them look middle-aged. In their eyes as they passed was no hatred, no excitement, no despair, no tonic of their victory—there was just the simple expression of being there as if they had been there doing that forever, and nothing else.”

“It would be wrong to say that war is all grim; if it were, the human spirit could not survive two and three and four years of it. … As some soldier once said, the army is good for one ridiculous laugh per minute. Our soldiers are still just as roughly good-humored as they always were, and they laugh easily, although there isn’t as much to laugh about as there used to be.”

4. On how soldiers change after long periods at the front.

“The most vivid change was the casual and workshop manner in which they talked about killing. They had made the psychological transition from their normal belief that taking human life was sinful, over to a new professional outlook where killing was a craft. No longer was there anything morally wrong about killing. In fact, it was an admirable thing.”

“Our men can’t make this change from normal civilians into warriors and remain the same people. Even if they were away from you this long under normal circumstances, the mere process of maturing would change them, and they would not come home just as you knew them. Add to that the abnormal world they have been plunged into, the new philosophies they have had to assume or perish inwardly, the horrors and delights and strange wonderful things they have experienced, and they are bound to be different people from those you sent away.”

“The drama and romance were here, of course, but they were like the famous falling tree in the forest—they were no good unless there was somebody around to hear. I knew of only twice that the war would be romantic to the men: once when they could see the Statue of Liberty and again on their first day back in the home town with the folks.”

“A soldier who has been a long time in the line does have a 'look' in his eyes that anyone who knows about it can discern. It’s a look of dullness, eyes that look without seeing, eyes that see without conveying any image to the mind. It’s a look that is the display room for what lies behind it—exhaustion, lack of sleep, tension for too long, weariness that is too great, fear beyond fear, misery to the point of numbness, a look of surpassing indifference to anything anybody can do. It’s a look I dread to see on men.”

“For the companionship of two and a half years of death and misery is a spouse that tolerates no divorce. Such companionship finally becomes a part of one’s soul, and it cannot be obliterated.”

“Always there are dogs in every invasion. There was a dog still on the beach, still pitifully looking for his masters. He stayed at the water’s edge, near a boat that lay twisted and half sunk at the waterline. He barked appealingly to every soldier who approached, trotted eagerly along with him for a few feet, and then, sensing himself unwanted in all the haste, he would run back to wait in vain for his own people at his own empty boat.”

“They seemed terribly pathetic to me. They weren’t warriors. They were American boys who by mere chance of fate had wound up with guns in their hands, sneaking up a death-laden street in a strange and shattered city in a faraway country in a driving rain. They were afraid, but it was beyond their power to quit. … And even though they weren’t warriors born to the kill, they won their battles. That’s the point.”