Theodore Roosevelt was many things: a frontiersman, scrappy pugilist, soldier, politician, president. While The 28th president of the United States... 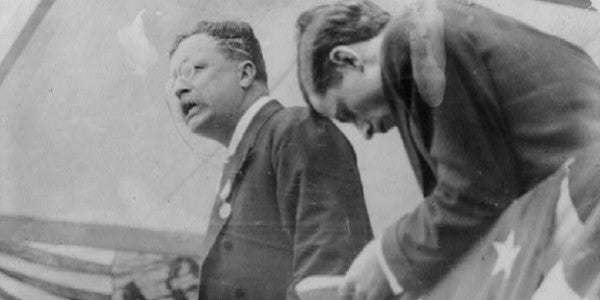 Theodore Roosevelt was many things: a frontiersman, scrappy pugilist, soldier, politician, president. While The 28th president of the United States is best known for his famous line on foreign policy “speak softly and carry a big stick,” and his military exploits during the Spanish-American War, his opinions on civic responsibility may have more relevance today.

On Jan. 26, 1883, Roosevelt was just 25 years old and serving on the New York State Assembly when he delivered a speech in Buffalo, New York, entitled “The Duties of American Citizenship,”

Here, Roosevelt laid out what he believed every citizen must do or not do, and the values they must have in order to be considered a “good citizen.”

More than a century later, the heart of Roosevelt’s speech — that every American has a responsibility to engage in the political process — still holds true.

You cannot be a good citizen, if you are not first a good person.

“… the first essential for a man's being a good citizen is his possession of the home virtues of which we think when we call a man by the emphatic adjective of manly. No man can be a good citizen who is not a good husband and a good father, who is not honest in his dealings with other men and women, faithful to his friends and fearless in the presence of his foes. …”

All citizens should engage in politics.

“The first duty of an American citizen, then, is that he shall work in politics; his second duty is that he shall do that work in a practical manner; and his third is that it shall be done in accord with the highest principles of honor and justice.”

“In a free republic the ideal citizen must be one willing and able to take arms for the defense of the flag.”

Civic responsibility is a constant.

“It ought to be axiomatic in this country that every man must devote a reasonable share of his time to doing his duty in the Political life of the community. … In so far as the community grows to think rightly, it will likewise grow to regard the young man of means who shirks his duty to the State in time of peace as being only one degree worse than the man who thus shirks it in time of war.”

If you do not take part in the political process, then you don’t deserve to benefit from it.

“The people who say that they have not time to attend to politics are simply saying that they are unfit to live in a free community.”

Every citizen must be a political watchdog.

“It is the duty of all citizens, irrespective of party, to denounce, and, so far as may be, to punish crimes against the public on the part of politicians or officials.”