117 Years Later, The Sinking Of The USS Maine Remains A Mystery 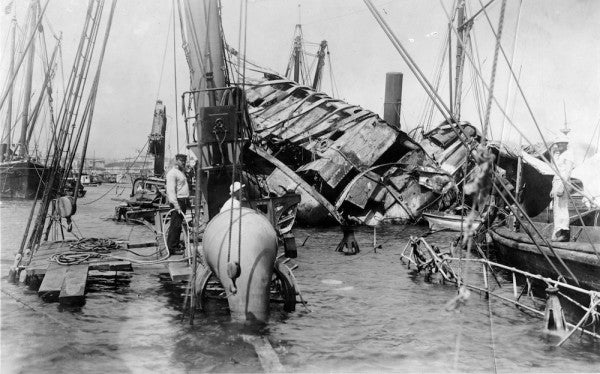 It’s February 1898, and you’re a recently recruited U.S. Navy sailor. Your ship, the USS Maine, left Key West, Florida, three weeks ago and is now in Cuba — Havana Harbor, to be specific. It’s 9 p.m. and the sun has gone down. You’ve been trying to read a tattered copy of “The Adventures of Captain Horn” by Frank Stockton, but the other young men in your berthing area have been making too much noise throwing wet rags at each other for you to pay much attention. It’s enough to break the relentless monotony, though. Topside, the dry winter breezes of the Caribbean blow lazily across the deck as the rocking boat gently swings your hammock back and forth. Today is just another boring Tuesday while you and the rest of the crew wait for something to happen.

On your ship, you’re somewhat cut off from the media, but before you left the Keys, you were remotely cognizant of things heating up with the Spanish over Cuba. As a 19-year-old serviceman, war is a concern, but in the last 50 years, the Navy hasn’t really done a lot of fighting. The Civil War some 30-ish years before was made up largely of land engagements. The subsequent Indian wars in the American West were fought by cavalry — hardly maritime in nature.

Then, out of the silence, a sudden brutal shock wave and massive explosion launches you off your mattress and into a metal cross beam. Blunt, withering pain fills your consciousness, and just before you pass out, you’re aware of intense screams. They’re coming from your friends. Other sailors call for their mothers as your world goes black.

Sailors aboard the USS Maine pose for a photo with their instruments.

This could have been the scene on board the USS Maine as it floated in Havana Harbor at 9:40 p.m on Feb. 15, 1898. At the height of American tensions with Spain over Cuba, war was looming. Local Cubans had begun rioting in the city, destroying property, and threatening order. The Maine was sent as a show of force to look out for American interests.

Since the end of the Civil War, American investors had accumulated a great deal of wealth from the sugar industry in Cuba, which was a colony of Spain at the time. Despite that, most of Cuba’s exports went to the United States, and nearly 40% of its imports were American — far greater volumes than it traded with its “mother” country. With the U.S. government eyeing locations in Central America to build a large canal to the Pacific Ocean, the unrest in Cuba seemed like a good opportunity for the United States to gain a foothold and maintain a presence.

Since 1865, Cuba had attempted to achieve independence from Spain multiple times. From 1895–1898, the infighting had grown particularly bad as revolutionaries were waging a guerrilla war against their European rulers. Spain was viciously suppressing Cubans in a campaign of “reconcentration,” sending thousands of people to camps. The result was open rebellion. President William McKinley’s administration wasn’t interested in a war, but it was hard to quell the rumors of Spanish brutality, which appalled many Americans. It was also hard to deny temptation — Cuban independence could mean solidifying a valuable strategic position in the hemisphere, not to mention allowing for a much less complicated sugar trade, capable of lining the pockets of Boston and New York businessmen. Even Theodore Roosevelt, who served as assistant secretary of the Navy in the late 1890s, openly advocated for war with Spain.

As guerrilla fighting and tensions in Cuba rocketed skyward, newspapers in New York owned by pioneers William Randolph Hearst and Joseph Pulitzer saw it as an opportunity to sell papers. Headlines and stories were embellished, and news stories were even fabricated, resulting in a new term “yellow journalism.”

The USS Maine mysteriously exploded on the night of Feb. 15, killing 260 crewmembers. Most died immediately, but others slowly burned to death. Lt. George Blow, who was abroad the Maine, wrote to his wife, “…the scene is still too terrible to recall, even had I the time.” The explosion had ignited the coal bunkers, quickly setting off the ship’s powder magazines, which nearly tore off the entire bow. The newspapers went wild, blaming the incident on Spanish sabotage and provocatively called for revenge, galvanizing much of the public in favor of a war. Unclear of the cause of the blast, the government urged calm and commissioned an investigation. The next month, a report conducted by the U.S. Navy determined the explosion was caused by a mine, with the Spanish the most likely culprits. American advocates for war chanted, “Remember the Maine! To Hell with Spain!” Congress authorized the president to use force and demanded Spain grant independence to Cuba. In response, Spain severed diplomatic relations and the Navy blockaded the island. The situation escalated further when Spain declared war on Apr. 24. Congress responded the next day with a declaration of its own, and McKinley reluctantly went along with it.

Colonel Roosevelt and his Rough Riders at the top of the hill they captured at Battle of San Juan.

The Spanish-American War lasted 10 weeks with much of the action taking place on the island of Cuba, the most famous battle happening on July 1. Col. Teddy Roosevelt, who resigned his post as assistant secretary to the Navy, led the 1st United States Volunteer Cavalry, aka the “Rough Riders,” to the Battle of San Juan Hill; a bloody struggle to the gain high ground above enemy naval concentrations in the harbor of nearby Santiago de Cuba. The action cost the Fifth Army Corps over 1,000 soldiers — nearly five times as many as the Spanish, but despite the grave loss of life, Roosevelt, who carried a pistol into battle recovered from the Maine, overtook the enemy position and carried the day. Two days later, the Spanish fleet was destroyed, leading to surrender of the city on July 17.

Other smaller actions took place on Spanish lands in the Philippines and Guam. In the end, far superior U.S. forces were able to gain ultimate victory over the Spanish, whose military had been declining since the early 1800s as a result of frequent clashes with France. In the Caribbean, Spanish forces were further weakened by disease. Backed into a corner, they knew they were beaten and agreed to the Treaty of Paris on Dec. 10, which favored the United States. The U.S. emerged as a power player on the international stage and was portrayed as a defender of democracy. The treaty ensured the U.S. gained all of Spain’s territories outside Africa, including the Philippines, Guam, and Puerto Rico.

Interestingly, the war benefitted both the United States and Spain. In many ways, the U.S. was still reeling from the Civil War, but the brief conflict with Spain brought together old foes from North and South, not to mention African American “Buffalo Soldiers,” who played a significant role during the fight for San Juan Hill. After the treaty was signed, the U.S. also returned much of Spain’s capital, which was then re-invested into steel, chemicals and other industries.

Wreck of the U.S.S. Maine, June 16, 1911. The photograph shows the raising and salvage operation of the ship, 13 years after it sank.

As for the USS Maine, controversy surrounded the incident and what caused the explosion. After the war ended, two more investigations were conducted in 1898 (one by the Spanish, and the other by the U.S. Navy), both reaching different conclusions. While the Navy insisted the Spanish were to blame, Spain’s examination of the evidence held that the explosion was clearly an accident caused by the crew. Another inquiry by the U.S. government took place in 1911 in conjunction with efforts to recover the bodies of many of the Maine’s crewmembers who remained entombed in the wreck. This investigation also blamed sabotage. A fourth analysis in 1974 was led by Navy Adm. Hyman Rickover, followed by a fifth in 1998 by the National Geographic Society. The most recent research was the subject of a 2002 television show called “Unsolved History.” Despite the numerous studies, however, none of the investigations were able to conclusively state what caused the blast that killed three quarters of the Maine’s crew. Even though the incident was known as “the last straw” that brought the U.S. to war with Spain, the mystery remains unsolved today.