That time 200,000 US troops spent an entire war on sick call 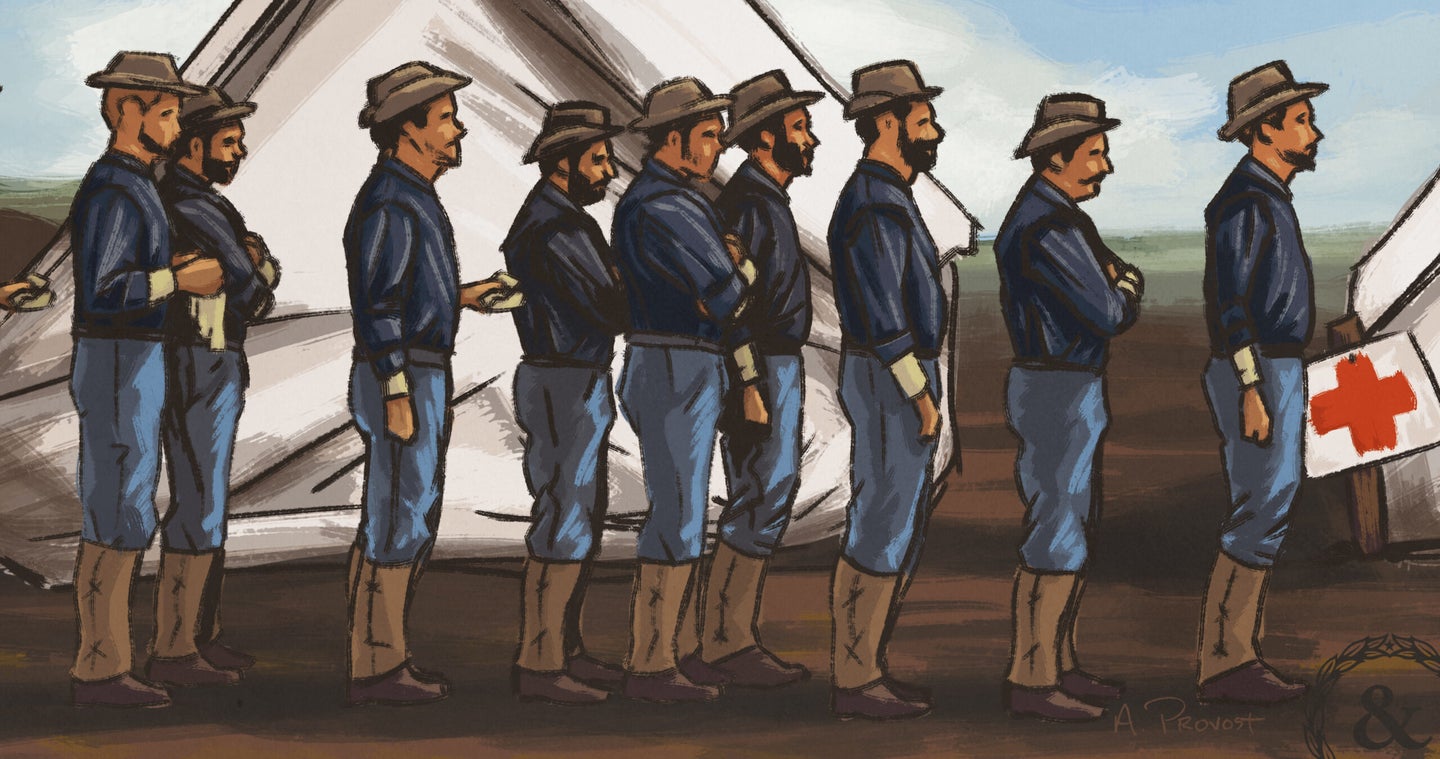 During the Spanish American War, more than 20,000 soldiers contracted typhoid fever while in training camps, largely because they shat where they ate. (Aaron Provost/Task & Purpose).
SHARE

Nearly 125 years after it ended, the Spanish-American War isn’t really commemorated in depth in the annals of U.S. military history. There’s the explosion that sunk the USS Maine and launched the United States into conflict, there’s Teddy Roosevelt and his “Rough Riders” volunteer cavalry, but that’s about it.

Compared with past campaigns, this might be understandable: While it was a significant moment in history — ending the Spanish empire’s centuries-long presence in North America and transforming the United States into a global power — hostilities lasted barely four months, and U.S. casualty numbers were relatively low. It was, as soon-to-be Secretary of State John Hay wrote in a letter to Roosevelt in July 1898, “A splendid little war.”

It may have been “a splendid little war” for the U.S. government, which walked away from the venture in control of Cuba, Puerto Rico and the Philippines. But it was most definitely not for the more than 200,000 soldiers mobilized to fight in it. For them, a majority of whom never even left the United States, much of the war consisted of sitting around encampments getting diseases like typhoid fever, yellow fever, malaria and dysentery.

When the war began in April 1898, the U.S. Army was small, with fewer than 30,000 soldiers. The vast majority of them were still spread around the western United States in small outposts. The Army had not trained or fielded large formations of troops since the Civil War.

A call for 125,000 volunteers was met within a month, and soon after a second call for 75,000 more saw the Army increase in size to more than 200,000 troops. The Army would soon find out that it was not particularly well-prepared from a public health standpoint to handle the sudden influx of soldiers. Indeed, when Congress appropriated $50 million in military spending on the eve of the war, only $20,000 was allocated to the Army Medical Department.

As summer began, more than 107,000 volunteers, along with thousands of Regular Army soldiers, found themselves in large camps in Florida, Georgia, Virginia and Pennsylvania. Soon enough, given the heat and the filthy nature of the camps, disease began to spread rapidly among the ranks. The biggest killer was typhoid fever, which spreads primarily through contaminated water. The symptoms include fever, sweating, and diarrhea — and given that these were the days before antibiotics, there wasn’t really a cure besides staying hydrated and trying not to die before the fever broke. That doesn’t sound particularly fun now, let alone during the month of July in, say, Georgia with no air conditioning. More than 20,000 soldiers contracted typhoid fever in the east coast camps, and 1,590 died.

By August, after the fighting in Cuba had already ended, the situation at camps in the eastern United States — where the vast majority of Army troops were still mustering — was bad enough that a medical officer, Maj. Walter Reed, was dispatched along with two other doctors to investigate. At Camp Thomas, in Chickamauga Park, Georgia, Reed found the “sinks full to the top with fecal matter; soiled paper was scattered about the sinks; and the woods behind the regimental camp was strewn with fecal matter.”

Elsewhere at Camp Thomas, “fecal matter was deposited around trees, and flies swarmed over these deposits not more than 150 feet from the company mess tents; the odor in the woods just outside the regimental lines was vile.”

Part of the problem, as Vincent Cirillo noted in ‘The Patriotic Odor’: Sanitation and Typhoid Fever in the National Encampments during the Spanish-American War was tensions between medical officers and commanders. Discipline was lax, especially when it came to hygiene, and many officers simply looked at disease in the camps as a fact of life. The commander at Camp Thomas, Maj. Gen. Thomas Breckenridge wrote that “you have got to get camp fevers with camp experience just as much as a child gets teeth.”

For the troops who actually did make it to Cuba — only about 50,00o over the course of the summer — the situation wasn’t much better. The Army had, in its infinite wisdom, decided to begin landing troops, none of whom were acclimated to a tropical environment, in June. Unsurprisingly enough, diseases like yellow fever and malaria began to spread rapidly among the ranks. By the time a ceasefire was declared in July, the Army had been effectively hollowed out by disease to the extent that Roosevelt sent a request to Washington to evacuate the force from Cuba.

“If we are kept here it will in all human possibility mean an appalling disaster, for the surgeons here estimate that over half the Army, if kept here during the sickly season, will die,” Roosevelt wrote. The soldiers from Cuba were eventually sent to a new camp in Montauk, Long Island, where deaths from tropical diseases nevertheless continued.

While the war had been quickly won, the number of deaths from disease and the reports from Reed were considered shocking enough to provoke some reform. Reed also chaired the United States Army Yellow Fever Commission, established in 1900, to study the spread of that disease. The commission, whose work involved intentionally giving themselves yellow fever — which resulted in one participant’s death —  proved that it was spread by mosquitoes, giving the Army a better idea of how to combat the illness during future campaigns. And in 1905, the Department of Military Hygiene was established at West Point, to more strictly codify disease prevention as part of military doctrine.

In the end, for the hundreds of thousands who served in uniform during the war, the biggest threat they ever faced was disease. Lesson learned? Quite literally, don’t shit where you eat.