‘Mad Dog’ Mattis Lights Up Congress Over Sequestration, Gitmo, And The End Of Afghanistan 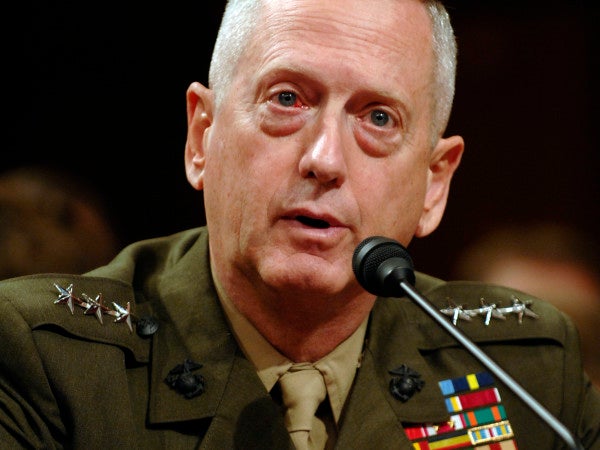 Known for his candor, “Mad Dog” Mattis is widely regarded as being fair, if critical. He holds a sort of legendary cult status in the enlisted ranks, widely revered by the modern rank and file. The general, who retired in May 2013, criticized sequestration on the grounds that it erodes the military’s capacity to perform, and hurts morale.

“No foe in the field can wreak such havoc on our security that mindless sequestration is achieving today,” said Mattis, who last served as the commander of U.S. Central Command.

His argument shouldn’t come as a surprise — partly because Mattis isn’t the only one saying it, but mostly because cutting funding means fewer capabilities, and there’s really no way to deny that.

Instead, we should cut specific programs, for specific and clearly stated reasons, rather than bring in a cleaver and grab at appendages haphazardly. Reduce where necessary, maintain where critical.

“If we refuse to reduce our debt/pay down our deficit, what is the impact on national security for future generations who will inherit this irresponsible debt and the taxes to service it?” Mattis posed.

Rather than reactively cutting large swathes of the defense budget, Mattis stressed the importance of developing a fiscal plan, and quickly: “No nation in history has maintained its military power if it failed to keep its fiscal house in order.”

Sequestration became law in a failed attempt to force negotiations between Republicans and Democrats in Congress in 2011. If Congress couldn’t reach a deal on the federal budget by 2013, massive cuts would immediately take effect in programs loved by both parties such as medicare, social security, and defense spending.

The idea was to create a sort of “live together or die alone” mentality in a fractured and partisan Congress, or looked at another way, to force the two partisan groups into a game of chicken. Because, you know, that always leads to compromise. Unsurprisingly, the threat of impending cuts was not enough to motivate Congress to come together, and the bill became law in early 2013.

Mattis railed against the sequester, saying that it did not work “because it was viewed as so injurious that it would force wise choices. It has failed.

On more general policy issues, Mattis called upon Congress and the White House to stand up from their “reactive crouch,” and take a more proactive and forward-thinking approach to matters of national security. In particular, the decision to release or transfer prisoners currently being held at the detention facility in Guantanamo Bay, Cuba, drew the retired general’s ire.

Critics of the administration’s decision to release prisoners have claimed that those turned loose have a 30% chance of returning to terrorist activity, while the president’s administration maintains that the range is around 7%.

Mattis argued that the release of enemy combatants shows a lack of will.

“If the enemy wants to fight, they should know we’re coming after you and if taken prisoner, you’ll be kept a prisoner until the war is over,” Mattis said.

Additionally, the retired general criticized the strict timetable for the withdrawal from Afghanistan, citing the withdrawal of U.S. combat forces from Iraq in the late 2000s as an example to be avoided.

And he wasn’t alone. Mad Dog was joined by Army Gen. Jack Keane and retired Navy Adm. William Fallon during the meetings.