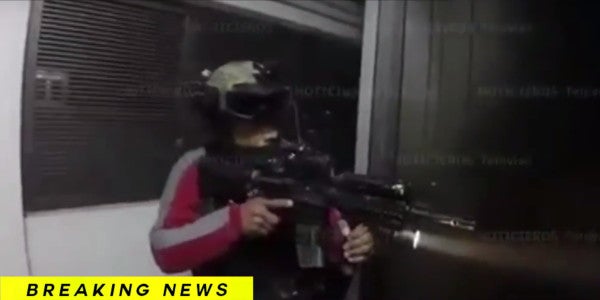 News that Mexican authorities had captured famed drug lord Joaquin Guzman — known simply as ‘El Chapo’ — sent shockwaves through the world. Guzman was captured in his home state of Sinaloa, Mexico, in the middle of the night by Mexican Marines.

New details have emerged from the capture, including helmet-camera footage, that reveal just how daring the raid was and how close El Chapo was to another escape.

The Marines stormed the jungle compound where El Chapo was hiding. They had the facility under surveillance for more than a month and raided the compound the night that El Chapo arrived, according to CNN. As gunfire raged, El Chapo and one of his top lieutenants escaped through a hidden tunnel behind a mirror in a closet. The managed to get through the sewer tunnel, and emerged out onto the street. Mexican military personnel attempted to pursue them through the tunnel, but were unable to, as it was flooding. El Chapo and his lieutenant stole a car and tried to escape, but quickly ran out of gas. After stealing another car, they were quickly intercepted and apprehended by Mexican authorities.

It is unclear which district will succeed in being able to prosecute El Chapo, or how long the extradition process will take. For now, he’s in solitary confinement under heavy guard in Mexico, lest he vanish again as he did through daring escapes in 2001 and 2015.

Watch the raid and capture of El Chapo below.