UNSUNG HEROES: The Sailor Who Died A Hero After Base Failures Let Someone Through The Gate

When a dangerous intruder entered the grounds of Naval Station Norfolk, Virginia nearly a year ago, civilian police officers on... 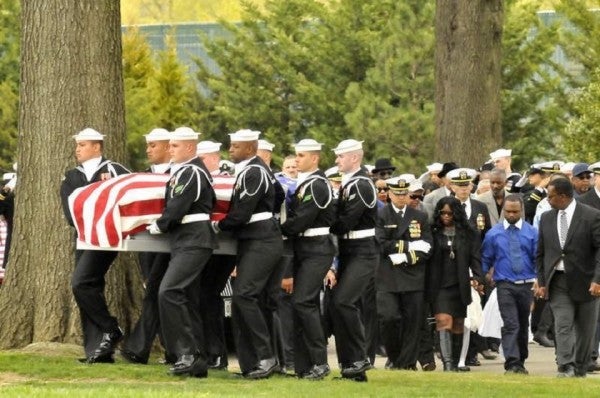 When a dangerous intruder entered the grounds of Naval Station Norfolk, Virginia nearly a year ago, civilian police officers on station neglected their training and didn’t try to stop the trespasser from reaching the destroyer USS Mahan, according to the recent findings of an investigation into the incident reported by Navy Times.

Although he was unauthorized to be on the base and had a violent criminal record, civilian truck driver Jeffrey Tyrone Savage breezed through multiple layers of security at the base entrance and a pier checkpoint late on the night of Mar. 24, 2014. When he tried to board the destroyer Mahan, a petty

officer guarding the deck confronted Savage after noticing the man was behaving erratically.

Savage struggled with the sailor, snatched her pistol, and was seconds away from shooting her when 24-year-old Petty Officer Mark A. Mayo intervened in an exceptional way while on a roving patrol, with the rating of Master-at-Arms 2nd Class. Although several security personnel had failed to meet the minimum standards of their jobs by letting Savage access the base and pier, Mayo’s decisive action went above and beyond his duty as chief of the watch on deck.

Just as Savage was about to shoot the disarmed sailor, Mayo rushed to place himself between the two individuals. Savage shot Mayo once before he turned his back to the assailant, shielding his fellow sailor with his body as Savage shot him three more times in the back.

Mayo’s intervention bought enough time for pursuing personnel to approach and open fire on Savage, who was shot multiple times and died from his wounds.

Mayo, described by one friend as a “a little guy carried himself like a giant,” even managed to put up a fight. Mario Palomino, Navy Criminal Investigative Service agent in charge at the scene, said Mayo shot back with his own firearm while he was still able to, reported The Virginian-Pilot.

For his actions on the night of Mar. 24, Mayo was posthumously awarded the Navy and Marine Corps Medal, the highest non-combat heroism award. Often called the non-combat Medal of Honor, the prestigious medal requires the recipient to have undergone “very specific life-threatening risk,” according to the Department of the Navy.

“While fearlessly engaging the assailant and shielding the Petty Officer of the Watch, Petty Officer Mayo was fatally wounded,” reads his medal citation. “His exceptionally brave actions saved the lives of four watch-standers and ensured the safety of the entire crew of USS MAHAN (DDG 72).”