Why We Should Accept Syrian Refugees Into The United States

For several years, the sounds of gunfire followed her wherever she went. She had to dodge mortar fire from time... 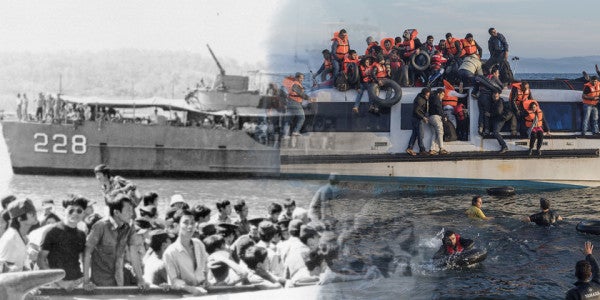 For several years, the sounds of gunfire followed her wherever she went. She had to dodge mortar fire from time to time and continuously move from place to place to get away from the war. She had lost her sister to the conflict, but still had her three younger siblings to take care of. Her family wanted peace and sought to leave the country. Luckily, her father was able to secure passage on a ship to safety. She got on this ship, heading to an unknown destination and future.

The sad part about that story is that it is two stories in one. This is my mother’s story. In April 1975, the Republic of Vietnam (South Vietnam) was beginning to crumble. As the Communist North Vietnamese began their assault southward toward the capital of Saigon, my grandfather, an officer in the South Vietnamese army sought a way to save his family from becoming prisoners, my mother, 14 years old at the time, included. Thankfully, he had connections in the South Vietnamese navy and my mother became part of the thousands of refugees who were searching for a new home. In the 1980s, millions more, known as the “boat people,” would follow them.

Similar stories are found among the millions of refugees escaping Syria. Syria has been, and continues to be, ravaged by civil war. With the Assad regime on one side and rebel groups that may be guided by radical Islam on the other, many find themselves caught in the crossfire. Over 100,000 civilians have already been killed in the fighting. It is no wonder that many are trying to find a path to a safer place, where they do not have to be worried about being killed every night.

However, like the tepid response to the Vietnamese in 1975, the reception of Syrian refugees in America has been less than welcoming. A 1979 Gallup poll found that 57% of Americans did not support allowing Vietnamese refugees to immigrate into the United States. A poll in November of this past year found that 60% did not support taking in at least 10,000 of the Syrian refugees.

In addition, the Paris terror attacks and the recent shooting in San Bernardino have not helped the plight of the Syrian refugees. Governors from 31 states pledged to block their entry after the attacks in Paris. While President Obama has stated that individual states cannot control immigration, these pledges are an indication of the extent of American opposition to refugees.

The issue has also become a topic of debate in the race for the presidency. Donald Trump, a leader in the polls for the Republican nomination, has stated his belief that the United States must make sure to keep out Muslims and ban Muslim immigration altogether, calling Syrian refugees a “Trojan horse” for radical Islamists.

Though we could argue about potential political, racial, and religious motives for opposition, I want to make an empathetic case for accepting the refugees from Syria. When my mother’s family came to the United States, they had lost virtually everything. They had lost their homeland, their country and life as they had known it. They had only the clothes on their back and what little money they could carry. When they had processed into the United States, a benevolent Baptist family in Tyler, Texas, took them in and provided for them. My family has always been thankful for the opportunity to start anew in the United States. As such, they all worked hard when they got here, despite the language barriers. With the opportunities that were given to my mother, aunts and uncles, they were all able to earn college educations and live what many would call the “American Dream.”

What I ask is that people take a look at the situations that many of these refugees are coming from and imagine the hardships they are undergoing and show compassion and empathy. They are coming from a very similar situation that my mother came from in 1975. Their country is being torn apart and many don’t have much with them. I would say that we are morally obligated to help these people and to give them a chance at a better life. If you were in that situation, I am sure you would appreciate a second chance at life, a chance at the American Dream. My family took full advantage of the opportunity the United States gave them, and if we give Syrian refugees that same chance, I think we’ll have quite a few who do the same.

I will agree that we should be concerned with our national security situation with respect to those who cowardly disguise themselves as refugees. Yet rejecting every single refugee because of that is morally wrong. The refugees need help in the form of a safe place to live a better life. If we deny them that because we are too afraid of terrorists coming through, I think we really have to question who we as Americans are and what we actually stand for. We would be ignoring what this great nation stands for and show ourselves as morally bankrupt. America would be disregarding the words of Emma Lazarus’ poem, “The New Colossus,” which are engraved on our beacon of freedom, the Statue of Liberty:

Give me your tired, your poor,

The wretched refuse of your teeming shore,

Send these, the homeless, tempest-tossed to me:

I lift my lamp beside the golden door

Perhaps we as individuals should take a more active role in helping them; whether that be through donations to various charities or volunteering to help them with resettlement. Many Vietnamese-Americans, like Duc Nguyen, a filmmaker and one of the “boat people,” have raised money for the refugee cause and are urging others to do the same. Organizations like the International Rescue Committee and Refugee Service of Texas have already been doing their part to help Syrian refugees resettle in the United States. Even religious denominations, such as the Roman Catholic Archdiocese of Indianapolis, are helping with resettlement efforts. Maybe by participating in these efforts, we can build relationships with the refugees, and in the process, we will find people like my mother who are willing to work hard and will be gracious for the opportunity to start over.