For months now, U.S. leadership has been working with Afghan president Ashraf Ghani to stand up a new “territorial force”... 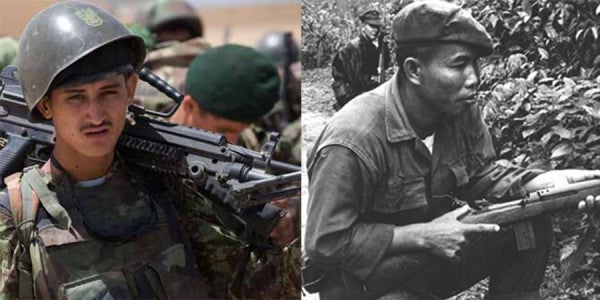 For months now, U.S. leadership has been working with Afghan president Ashraf Ghani to stand up a new “territorial force” to fend off Taliban elements on the local level. The new security force would consist of “self-defence units of locally recruited men serving in their own villages… to stabilise areas cleared by regular security forces and establish law and order,” as The Guardian puts it.

It’s easy to see why the United States would want to start from scratch on provincial security in Afghanistan, seeing as the Kabul government actually controls 15% less territory now than two years ago, according to the U.S. special inspector general for Afghanistan reconstruction. And it’s intuitive to want to put local tribes in control of their own security — less work for Americans, and less fertile territory for the bad guys. In theory.

The trouble with intuitive ideas is they’ve probably been tried before, to poor effect. In this case, the “Afghanistan Territorial Forces” model sure sounds a lot like a gambit we tried in Vietnam: the Regional Forces and Popular Forces, or “Ruff Puffs,” as the friendly media described them during the war.

The idea was this: Stand up villagers to defend their villages from infiltration by the Viet Cong. Nearly half a million villagers were enlisted in thousands of companies for the effort, which was as big as the rest of the South Vietnamese army at the time. The Ruff Puffs were extolled by U.S. public affairs officers as heroes. One U.S. major in 1970 extolled them as “gutsy little fellows,” according to the New York Times, before he added that “acts of terrorism by the Vietcong are ‘a primary indicator that the enemy is weak because if the enemy was strong enough it wouldn't be necessary.’” (Sound familiar, Iraq/Afghan vets?)

Anyway, you can figure out how that plan went in Vietnam. Plenty of U.S. advisors warned early on that the Ruff Puffs’ power to prevent communist infiltration of the villages was a fiction. “Their time and effort is largely spent in making sure the province chief, usually lieutenant colonel, is kept safely out of harm’s way,” Marine counterinsurgency expert Lt. Col. William Corson wrote in The Betrayal, his stinging 1968 critique of the U.S. strategy in Vietnam. “The result of the failure of the RF to carry their share of the load is not only increased American casualties but also the unnecessary added expense to the American taxpayer who must underwrite their performance.”

That sounds uncannily like criticism we’ve heard about Afghanistan. So it’s probably worth noting that once the United States fully withdrew from Saigon and the North Vietnamese Army advanced in 1975, the half-million Ruff Puffs pretty much crumbled immediately.

Relatedly, the United Nations has already expressed concerns that a new U.S.-led territorial militia in Afghanistan will empower some of the most corrupt, anti-Kabul chieftains and local big-swingers. And other critics charge that the whole plan sounds like a reboot of the Afghan Local Police force, which was a hotbed of corruption, insurgent sympathy, and do-nothingism. “Since the Afghan Army suffers from leadership problems at the unit level,” one Brookings Institution expert told the Times in September, “there is no guarantee that army will be significantly more capable of controlling the new militias than the previous police leadership managed with the A.L.P.”

But then again maybe I’m being cynical and reductive in this extended parallel between Afghanistan and Vietnam. Any thoughts on the contrasts between America’s two great Asian land wars? Tell me in the comments or email me. I’ll share the best critiques and comments.