This Marine was nearly killed in Afghanistan. Then came the hard part

The story behind a famous photo from the Afghanistan War — and its far-reaching consequences. 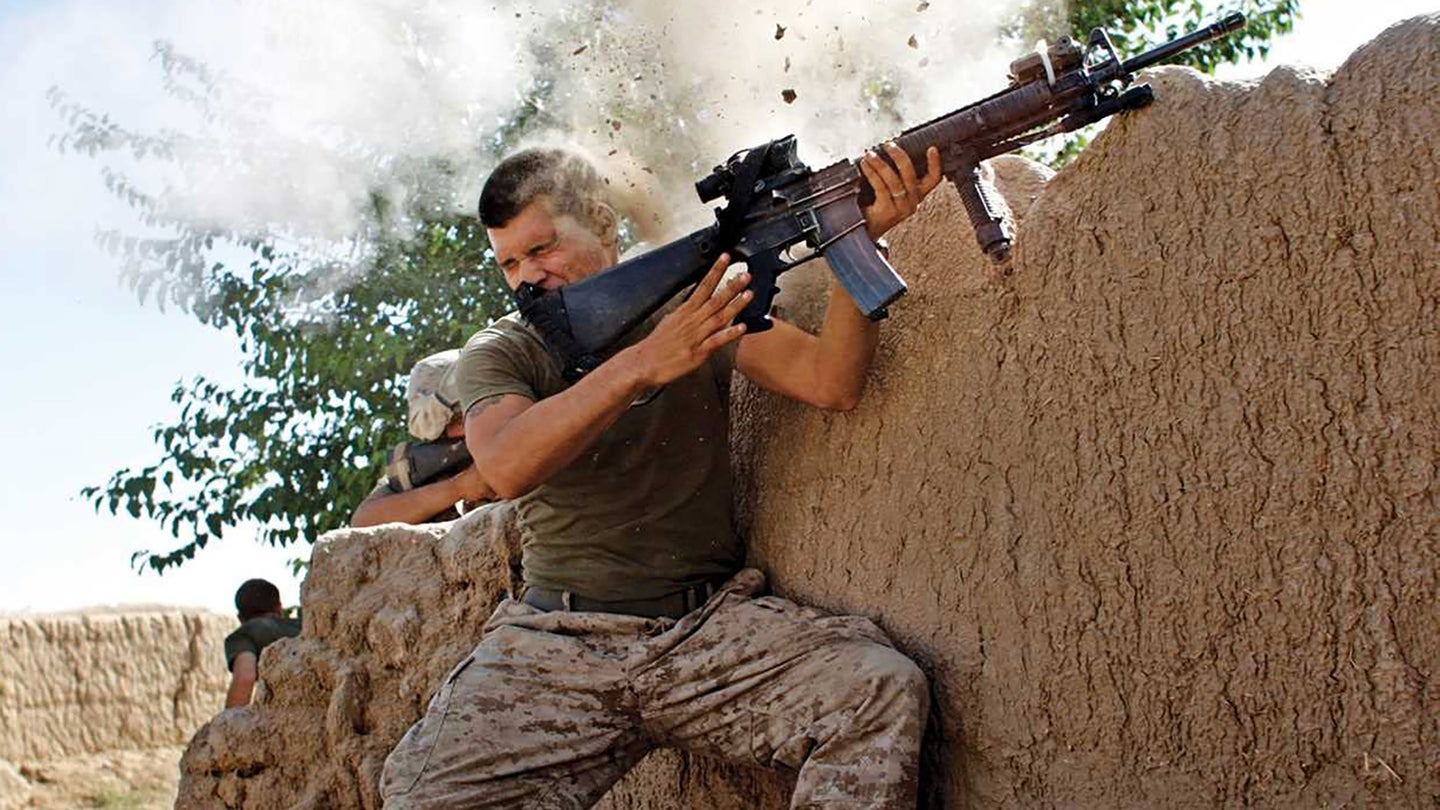 The following is a review of The Shot: The Harrowing Journey of a Marine in the War on Terror by Bill Bee and Wills Robinson.

A remarkable event animates the new memoir The Shot: The Harrowing Journey of a Marine in the War on Terror, written by former-Marine sergeant Bill Bee with the assistance of Wills Robinson. Bee is the subject of a famous photographic “shot” taken by Reuters photojournalist Goran Tomasevic in Helmand Province, Afghanistan in 2008. Tomasevic’s picture captures Bee recoiling after being struck by the debris of a round fired by a Taliban sniper into the concrete wall behind which Bee crouched while under attack. Photographs of combatants at the moment they are wounded or killed in battle are rare and always command attention. In The Shot, Bee relates the compelling story behind the picture and its far-reaching consequences.

But “the shot” is only one aspect that makes Bee’s story memorable. Bee, in fact, was only momentarily stunned by the impact of the round captured in the picture and was back in action with his platoon in a matter of hours.

Far more grievous was a wound he suffered on his next tour in Helmand two years later. While showing the leaders of the unit replacing his own the terrain on which they would fight, Bee and his squad were blown up by an IED embedded in a wall of a compound they were searching. It would take years before Bee overcame the neurological damage he suffered in the explosion. Even worse, he said, was the guilt he felt over the lives of two sergeants who died in the blast. Adding an almost Shakespearian or Greek element of tragedy to the men’s deaths is the fact that Bee, on a previous tour as a recruiter, had enlisted one of them into the Marines.

That is a lot for any one man to bear, especially a good man, and Bee comes across in The Shot and video interviews as a sensible, likable, good-natured guy who wanted little more than to be a squared-away Marine infantryman and a decent husband and father to his wife and son. That desire shattered by the events that befell him, The Shot describes the almost-impossible-to-fathom violence of combat action and the difficult years afterward that Bee spent trying to recover his health and find his way in life after leaving the Marines.

Taking each of The Shot’s component parts — the famous photograph, service in the Marines, and redeployment recovery — the picture was heralded as a wake-up call to America and the world that the fighting in Afghanistan was more savage than they knew. It also signaled that the young troops doing the fighting were bravely facing up to the danger they encountered almost daily.

In truth, Bee looks great in the picture, caught in action like a boxer or NFL star heroically playing his part in a ballet of violence in a way some men might aspire to in their fantasies. Undoubtedly, renown as the subject of the picture brought him incredible cachet and credibility within the Marines and an enormous amount of goodwill from civilian admirers. Bee modestly downplays all that and insists that it was all a matter of chance and happenstance. In The Shot, he is most anxious to explain the circumstances that took him into battle without his helmet and ballistic vest — the seriousness of this faux pas being very understandable to those who have served in Iraq and Afghanistan, where by-the-book officers and uniform-obsessed sergeant majors seemed to care about little but “uniform discipline.” And yet Bee doesn’t dwell on reproach from his unit leaders; in fact, it was the tongue-lashing from his wife for being so stupid as to charge into battle unprotected that compelled him to keep his helmet glued to his head on future missions.

The portions of The Shot in which Bee describes Marine training, his previous deployments to Afghanistan, and the face of battle in southern Afghanistan are of great interest to those who have traveled similar paths. Bee deployed to Afghanistan twice and once to Guantanamo Bay before the two tours in which he suffered injuries. While the early tours were quiet in terms of fighting, Bee relates curious events and impressions associated with each that will resonate with fellow vets.

On the latter two tours, Bee found all the action any infantryman could hope for. As a reader, I was struck by the denuded, stripped-down battlefield on which Bee’s units fought in Helmand Province. Combat took place in small villages isolated on the expanse of flat desert. The civilian populace had almost completely vacated and the villages and compounds were instead filled with Taliban fighters eager to kill American invaders. And yet, even in what seemed a free-fire zone, Bee recounts that non-combatants would occasionally appear. Several passages in The Shot describe women, children, and handicapped Afghans caught up in the maelstrom of violence, their presence forcing the Marines to rapidly recalibrate the shoot-or-be-shot mindset that generally prevailed.

The last third of The Shot describes Bee’s life after being evacuated from Afghanistan following the IED explosion that killed two of his fellow Marines. Stories of difficult reintegration are a staple of Global War on Terror memoirs, but The Shot adds to this grim processional in interesting, important ways. For one, it offers a “long view”— 10 years or more on from the return from war — and so we witness a series or cycle of lingering after-effects and attempted remedies that are only intermittently or slightly effective.

It took a while for Bee to leave the Marines and while still in, barely functional, he was slotted into a series of jobs that increased rather than quelled his physical and mental impairments, or seemed wildly inappropriate.

Assignments as a unit substance-abuse officer and suicide-awareness officer, for example, came after one attempt to drink himself to death with the prospect of future attempts still likely. Even after being discharged, Bee remained attached to the Marines, continuing to reside outside Camp Lejeune and working on-base in contractor positions. A funny but sad scene early in The Shot describes Bee as a contracted teacher of a mandatory class for Marines exiting the service — Bee is only mildly critical when he might be outraged, but posing as a civilian career counselor while earning $27,000 a year and still prone to getting lost in the aisles of the local Walmart due to brain fog strikes even him as hapless, both in regard to his fitness for the job and the efforts of the Marines to care for their own after they are done fighting.

As for treating the traumatic brain injury and post-traumatic stress with which Bee was afflicted, cannabis advocates and enthusiasts will appreciate Bee’s discovery that getting high prior to bedtime was a far better guarantee of a good night’s sleep than any of the dozens of medications he was prescribed, to say nothing of the beer and spirits he overindulged in. Bee takes a few well-aimed shots at the Veterans Administration, while also rendering credit where it’s due, at least in terms of their effort, if not their results. Reading between the lines, perhaps Bee wasn’t ready to be helped, or didn’t feel he deserved to be helped. Perhaps the programs weren’t calibrated to reach him in ways to which he was receptive.

Somewhere between the hero lionized by the famous photograph and the abject failure responsible for the deaths of fellow Marines, Bee wandered for the better part of a decade, lost, confused, and often in denial or acting out. The Shot is understandably circumspect in describing what must have been a battlefield on the home front. Bee alludes to fights, irritability, withdrawal, and absence, but hesitates to describe scenes in detail, probably for fear of forcing his devoted wife Bobbie to relive what sounds like a ten-year nightmare. In this light, The Shot might have occasionally welcomed Bobbie’s voice, perhaps in the way Chris Kyle’s wife Taya is given page space in American Sniper to describe Kyle’s troubled post-Iraq years.

The Shot packs a lot in but doesn’t cover everything. There are no political rants — Bee seems to be neither an uber-patriotic zealot nor a radicalized lefty-vet — and no opining about strategy and policy in Iraq or Afghanistan or meta-analysis of Marine culture. Similarly, Bee has few bones to pick with Marine leadership or his unit chains of command. That’s for the best, as it keeps The Shot’s focus centered on the events of Bee’s life as they occurred.

The Shot might benefit from more generous inclusion of other perspectives, such as Bobbie’s and Goran Tomasevic’s, and more a focused description of events and people could make selected scenes and characters more vivid — several episodes “tell” rather than “show.” In Bee’s defense, the unembellished narrative reflects his core identity as an infantryman, not an aspiring writer or literary artist.

Overall, The Shot resembles Chad Rickard’s Mayhem 337: Memoirs of a Combat Advisor in Afghanistan in terms of a sergeant’s-eye view of fighting in Afghanistan and Michael Anthony’s Civilianized: A Young Veteran’s Memoir in terms of describing lost years post-war, with The Shot recording both the journey to and from war succinctly and directly within the cover of one book.

Vietnam War vet and author Larry Heinemann, whose autofiction novel Close Quarters is the most graphic and disturbing hell-and-back vet memoir I know, once wrote on a Facebook post that to regain mental equilibrium and life stability, traumatized vets need to “find something to do with their hands that helps people.” Writing is done with the hands, and Bee reports finding hands-on outside employment he enjoys on the ranges at Camp Lejeune, and both activities are helpful. Here’s hoping that his harrowing journey is finally winding down.

Peter Molin is a retired Army infantry officer and former instructor at the United States Military Academy. Since 2012, he has published the blog Time Now: The Wars in Iraq and Afghanistan in Art, Film, and Literature.