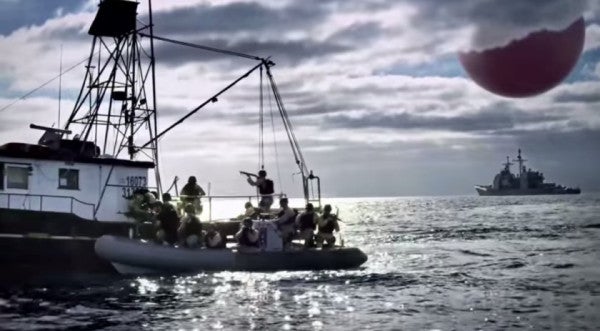 Navy SEALs conduct a boarding operation while a large orb looms overhead, ominous and red. Fighter jets fly in formation past the slightly reflective sphere. An explosive ordinance disposal team detonate what appears to be an IED somewhere in the desert. And all the while, that big red ball just hangs around.

If you haven’t seen the Navy’s newest recruiting commercial, this must seem very confusing. But, then again — if you have seen it, you might still be a little lost. Built around the idea of a pin map, the advertisement depicts a series of different missions, in a wide variety of locations, showcasing the Navy’s diversity as well as its global presence. It’s also a bit jarring, but that’s less of a critique than it initially seems.

The use of these pins hovering over sailors on ships, climbing mountains, or in the air, is actually a lot more clever than it at first appears. The audience is presented with a strange image and has to puzzle the meaning out of it — or in this case, wait until the end of the advertisement to realize what’s going on. It’s not a new concept; think about those crazy gum commercials from a few years ago. Many other advertisers and groups use the same trick, but it’s the first time we’ve seen the Navy try it.

This is a far cry from the standard fare of military commercials, which are packed full of so much motivation most people feel compelled to sprint out of the room and away from the television.

The new commercial is “a pretty big departure from the themes and images of the early 'Global Force for Good' commercials,'” said Cmdr. Chris Servello, spokesman for the chief of naval personnel, during an interview with Navy Times.

The fact that the short video uses the “pin drop” from mobile navigation apps may also indicate a shift in attention and target audience; or rather, an acknowledgement that the Navy needs to actually target and appeal to its base: young adults who are likely to, or already have enlisted, as junior sailors. The Navy’s struggle with retention rates may be a reflection of the service’s relationship with its most junior personnel, more and more of whom aren’t feeling reflected or represented by the branch’s policies.

This ad follows on the tail of “The Shield,” which prominently features sailors from a wide range of occupational specialties and appears to be an attempt to show the Navy’s diversity presumably to reassure current personnel and future sailors that they will be a valued part of a larger team. Whether or not that’s true is yet to be seen.

“The simple take away from both commercials: America's Navy keeps us safe at home and protects interests abroad through our ability to be present around the world — where it matters, when it matters — with the latest technology and top notch sailors,” said Servello.