Drinking In The Military Has Big Collateral Damage

Every so often after work, I stop by the officers’ club at my base to see what’s going on. Without... 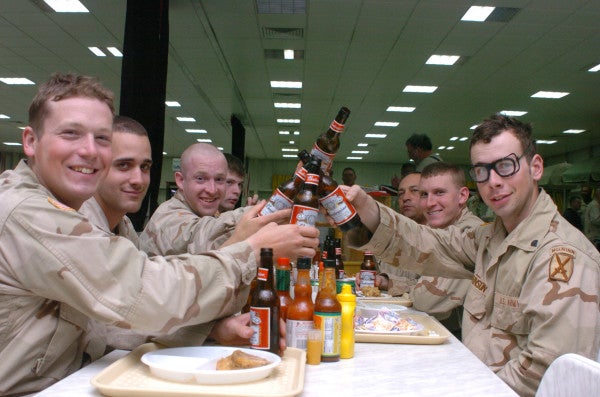 Every so often after work, I stop by the officers’ club at my base to see what’s going on. Without fail, unless I go to meet up with specific people or there’s a special event, the place is deader than Elvis. I’ll wave at the bartender and awkwardly look around as if I’m looking for someone, then make a quick about face.

With few exceptions, this is the way most military clubs are. They do a decent lunch business. Some enlisted clubs bring in decent numbers with pool and sports television, but none are eagerly anticipated social venues at the end of a long week. On some bases, there’s so little business that all the clubs have been combined to make what must be the most awkward social scenario possible.

So what? There are a million other places to buy beer. Why should the military club be sacred?

Few still in uniform remember the halcyon days of military clubs, though many a colonel or sergeant major will tell you a long and colorful story about them with very little encouragement, usually with a caveat about how, “You can’t do that anymore.” These are usually the same leaders who would come off the top rope on any junior performing the same escapades they admit to.

The “good old days” are a mixture of both the good and the bad, as is true of any flight of nostalgia. The reason those days ended is because the bad part got out of hand. In a gender-integrated force, strippers at the O-club aren’t a great idea. Drunk driving and binge drinking have also been significant problems in the military as well. These and similar issues led to the military “deglamorizing” alcohol through rules, regulations, and publicity campaigns. A documented “alcohol-related incident” is a career ender for senior personnel, even if the only nexus of alcohol to the incident is the fact that a beer was inside a 50-foot radius.

Alcohol isn’t, and shouldn’t be, glamorous, but it is part of life. As the military addressed other problems — some alcohol-related, others not — it threw the baby out with the bathwater. Put another way, a few guys crapped their pants and now the whole military wears diapers.

Today, service members often don’t see the clubs as fun, or even as places for mentorship, fellowship, and learning. Previous generations learned about leadership and military heritage while sipping beers. Today, most service members see it as only a professional obligation; at best, “The boss said there’s a frost call and I have to stop by for 15 minutes.” Stopping at the club and hanging out with coworkers has become an extension of work, not a relief from it.

Because of the pressure to dumb down the drinking, a vicious cycle of lameness taken its place. Those who would go to the club for a few drinks don’t go because it’s discouraged, which means that others don’t go just to socialize, and so on. Base clubs have become places to get facetime with the boss, not where one goes to meet friends. With the deglamorization of alcohol in full effect, why would a good time ever break out? What if the boss sees someone order shots? What if things got loud? God forbid a game of full-contact Crud breaks out, or dice players get too rowdy slamming down their cups.

Is partying a military necessity? Obviously not, but by too strongly discouraging a raucous good time, the institution is killing the social interaction that helped build a cohesive and effective military. There are a lot of war stories and good advice being lost over a second or third beer because there’s hell to pay if it goes into a fourth.

“But what about the children?” some are asking, “children” being synonymous with how any service member under the rank of major is treated. “Aren’t we encouraging them to abuse alcohol?”

News flash. Service members are going to drink. So let’s encourage them to get their drink on in an environment that we control, where others will take care of them and maybe impart some learning on the way. Let’s allow guests on base on weekend nights more easily. Offer shuttles from the clubs and remove the stigma of actually using the unit’s ride program as intended. Let these guys learn that alcohol can be enjoyed responsibly without disaster and non-judicial punishment in the aftermath.

As service members grind through back-to-back-to-back deployment schedules, they need a check valve — a place to bond, share stories, and yes, commiserate. Military personnel are not all going to the head shrinker or the umpteen other resources at base family services. A lot of them just need to sit down and talk things out with a comrade and a beer. This is resilience training in disguise. This has been true of military organizations from ancient times to the present. In recent years, though, we’ve pretended this isn’t the case. The military needs to face reality and acknowledge that responsible alcohol usage is part of the solution, not just the problem.