What officers drink at every stage of their careers 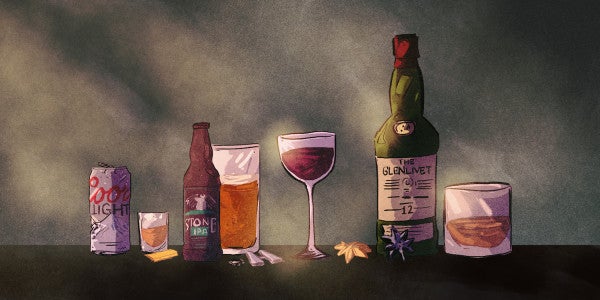 Like it or not, alcohol is part of military life. Even in today’s uptight atmosphere, alcohol is one of the lubricants helping the military machine run smoothly. But the weight and viscosity of that lubricant changes through your time in the military. As an officer goes through his or her career, things evolve, and your choice of drinks changes with them.

Of course, your mileage may vary with these descriptions. Aviators, for example, have squadron bars. And warrant officers: No one even knows what the hell they do normally, much less when they drink. Naval ranks are different than what I detail below as well, but that doesn’t matter, because you can just put “white zin” down for all ranks. Regardless, military life is hard, and everyone needs a drink.

Beer. Not special beer, but your regular old beer. You’re in a crappy town, so you might as well hoist a few. You won’t drink Natty Lite — you’re not a damned savage, after all — but Budweiser and Coors Lite aren’t dirty words yet. Getting a keg at the PX and draining it on a Friday at your house is still a thing. If things go right, maybe those chicks from University of North Carolina-Wilmington will actually make the 45 minute drive to jarhead central to hang out.

Lieutenants are also prone to enjoy a round of shots. Some are the classic vodka/whiskey/tequila. Others are more likely to be consumed on something resembling a dare. Yeah, I’m looking at you, Jägerbomb.

Captains are on the verge of being respectable. They’ve got some change in their pockets finally, so it’s time to step up to the microbrew market. Stone, Dogfish Head, Loose Canon, Victory, and the like are parts of their vocabulary now. Only kids and rednecks drink mass-produced, domestic beer. Captains have mostly transitioned from getting plowed to actually tasting the beer on the way down.

Some of them will even make the leap into beer snobbery and home brewing. Every group has someone who takes things a little too far. There always a captain who has taken the casual homebrew setup for a miniature version of Stone Brewery in his garage.“Yes, I know you’ve got an industrial-grade kegging setup in your garage. No, I don’t give a shit.”

Real money and real social climbing now. You’re a real adult. Now you’ve started drinking wine. And not that boxed bullshit, either. You and your significant other enjoy taking trips to wineries in the country. You’re old enough to get drunk in a classy fashion. You’re going to taste the shit out of some wine. You are still secretly trying to figure out what the hell “earthy undertones” are.

Of course, majors are getting to the point where they rate their own offices, offices where they get their own cabinets, desks and mini-fridges. They are baby-stepping into the world of debriefing missions and training over booze.

Lieutenant colonels are the old men of their units, and they usually drink like it too. They will enjoy a fine brew at the club (hell, they’re probably the only people actually going to the Officers’ Club), but they are also prone to spending a lot of time in their offices. They also get to call people into their offices for “meetings” and “counselings” over fine afternoon “tea.” That tea is usually brewed by Dewar’s, or preferably Glenlivet. It definitely makes burning the midnight oil much more appealing.

As Cartman once said, “Whatever! I do what I want!” Everyone else in the bar is having what the colonel is having. Everyone else is worried about finding a designated driver. The colonel has people falling over themselves to help themselves by helping him. Occasionally, things fall through, but by and large, no one is going to tell the old man he shouldn’t drive home.