“She not only protected the wellbeing of the children but also their dignity as human beings.” 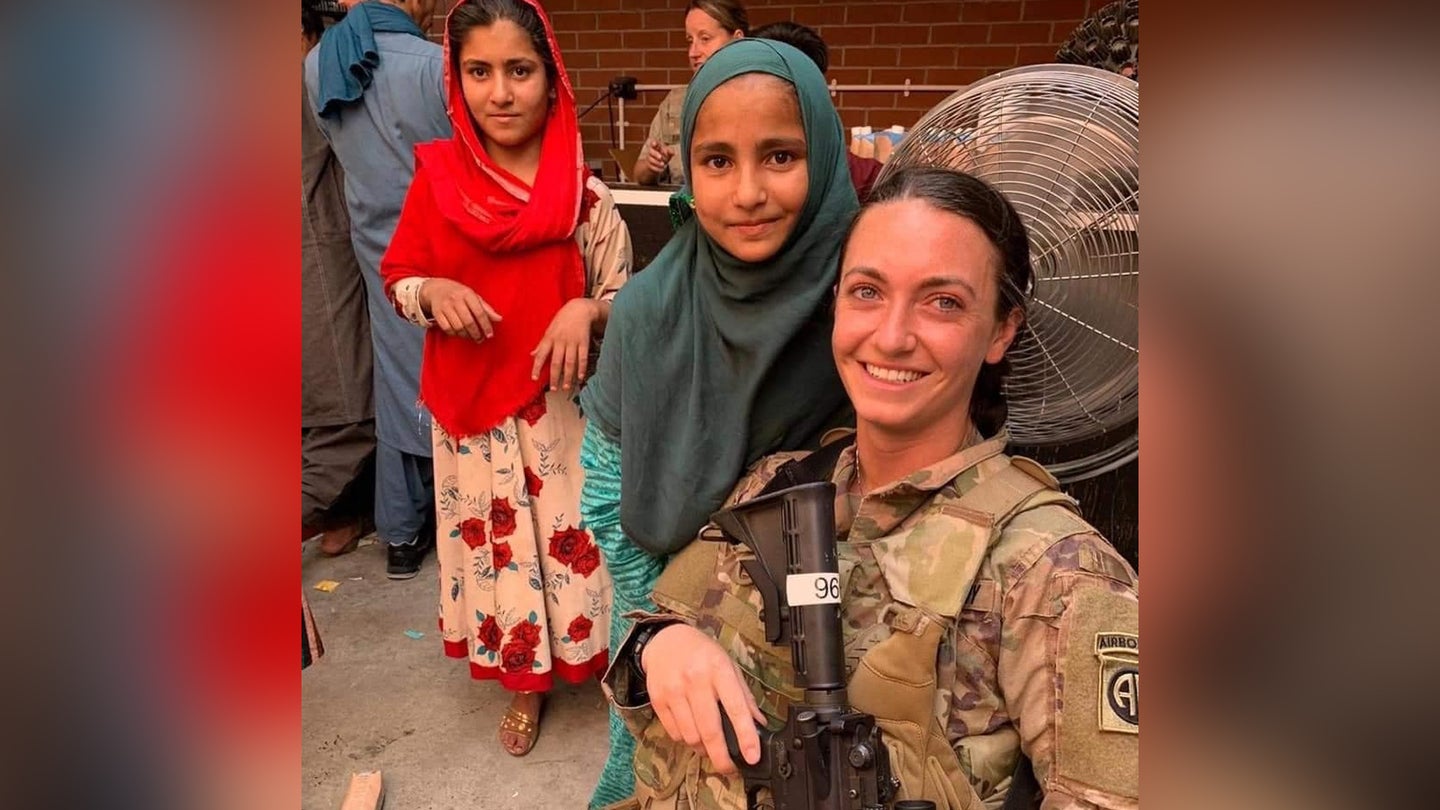 Army Sgt. Breanna Jessop’s reason for joining the military was simple: She didn’t want to get to the end of her life and realize she hadn’t made an impact.

Jessop is from a small town in Utah. Her graduating class in 2016, which pulled students from three towns in the area, had roughly 150 people in it. She had no idea what she would do in college, so while she was in high school she reached out to an Army recruiter and a Marine Corps recruiter on the same day, waiting to see who would respond first.

The Army did, and the rest is history.

Jessop has since been named the 2021 USO Service Member of the Year for her work during the August deployment to Hamid Karzai International Airport in Kabul, Afghanistan. The 23-year-old chaplain assistant, who joined the Army in 2016, not only ensured that 4,000 U.S. and coalition forces had “basic hygiene items” at the airport, where resources were scarce, but she “provided phenomenal leadership to oversee the orphanage” at the airport, according to her nomination written by 82nd Airborne Division Command Sgt. Maj. David Pitt.

“As a result of her untiring humanitarian efforts, over 400 displaced children were safeguarded throughout NEO operations and enemy attacks,” Pitt’s nomination letter says. “She not only protected the wellbeing of the children but also their dignity as human beings.”

You wouldn’t know the impact she had just from speaking with her. She’s not one to brag, or embellish details, or make her role in something sound like something it wasn’t. As one soldier at Fort Bragg put it, she’s “a true paratrooper, very humble.”

While sitting in a conference room at the 82nd Airborne Division headquarters at Fort Bragg, North Carolina, Jessop explained that week-and-a-half in Afghanistan as if it was just another job, another assignment. She said that in her mind, “I did my job and I did my job the best I could.”

Jessop’s job included taking care of some of the most vulnerable civilians at the airport — babies and children, many of whom were alone — during a chaotic and traumatic time in their lives.

When Jessop arrived in Kabul on Aug. 17, she said it was quiet and felt almost abandoned. But that didn’t last for long. She took on the role of the non-commissioned officer in charge of the chapel at HKIA and was working with the field hospital that had been set up, caring mostly for service members.

Before long, more and more civilians were coming through the airport and needed medical care at the hospital. As flights began leaving the airport, time and again she saw evidence of desperation: With space on the flights severely limited, those lucky enough to get a seat had to abandon many of their belongings. Parents were putting layers upon layers of clothing on their children, trying to take as much with them as they could after being told they had to leave their bags behind.

In one instance Jessop recalled, a woman pulled her wedding dress out of her bag and put it on over her clothes, refusing to part with it.

And as more civilians came through, Jessop and her team realized they were needed in another way.

The soldiers started working with linguists at HKIA to talk with the kids, find out where their parents were, or if their parents were even alive. They asked some of the older children there what happened and if they were related to any of the other kids in an effort to keep siblings and families together as best they could.

At first there were only a few children, she said, and they learned that while some were orphans, others had family members waiting outside the gate. But the soldiers couldn’t just “put them on a plane to go somewhere,” Jessop said, so they created an orphanage of sorts where they kept the children until they were either able to reconnect them with their families, or the children were evacuated. The soldiers found coloring books and toys; they found a radio that they brought in and had dance parties with the kids; the soldiers cooked and handed out tea and chocolate which, unsurprisingly, the kids loved.

“We were just trying to cheer them up, keep them happy,” she said. “Like I don’t know what you went through or how rough that was, it’s not something I could ever relate to, but I’m here to give you love.”

Despite the chaos unfolding around them, many of the kids were “pretty cheerful” and “a lot happier” than you might expect, Jessop said. Some of the older children who spoke English helped her communicate with adults who didn’t. As for the babies, of which there were a lot, Jessop said, the goal was just to “hold them and love on them.”

Jessop estimated that more than half of the children in their care had families outside the gates of HKIA, and had been handed over in a desperate attempt to get them on a flight out of the country. She recalled one instance in which she went to the make-shift orphanage and saw a group of children preparing to leave, with “U.S.A.” written on their hands, indicating where they were heading.

“They just got super excited, they recognized [my] uniform, and they just came running over like, ‘U.S.A!’ Like just screaming and pointing at their hand,” Jessop said. “They were excited.”

When she returned from the deployment, Jessop wasn’t expecting any accolades, so you can imagine her surprise when she received a call in mid-September notifying her that the Sgt. Maj. of the Army Michael Grinston would soon be calling her himself.

“He was like, ‘The Sgt. Maj. of the Army is going to call you at this time. Are you available?’ I was like, ‘I will make myself available,’” Jessop recalled, laughing. She had no idea why Grinston would want to talk to her and was racking her brain for what she possibly could have done to get herself in that situation. Then she got a call from a staff sergeant who said she was going to patch Jessop through to Grinston.

When Grinston got on the line, she said he joked that she was “in a lot of trouble” before explaining the real reason he was calling. He explained to her that every year, hundreds of service members across the military are nominated to be USO Service Member of the Year. According to the nomination letter from Command Sgt. Maj. Pitt, Jessop was nominated “for her devoted and selfless leadership in peacetime and under duress operations while demonstrating the highest caliber of Army values which left an indelible mark on the mission.”

Grinston told her that her nomination, and her story, stood out. She would be named the 2021 USO Service Member of the Year, he said.

Grinston said in a statement on Wednesday that what stood out about her story was “how well it highlights all of the ways our soldiers serve above and beyond their normal duties.”

“We are known for moving to the point of friction – especially our noncommissioned officers,” Grinston said. “To be able to honor Sgt. Jessop as the USO Soldier of the Year, we’re honoring every soldier that sees an opportunity and takes ownership of the solution.”

Jessop is still not used to the attention. She said she’s gotten a bunch of emails from different people she doesn’t know telling her congratulations, and in December she’s planning to travel to Washington, D.C., for a ceremony. While she’s honored by the title, she said that all she was really focusing on during her deployment was making sure she didn’t have regrets.

“My biggest thing was, I don’t want to leave here and think back, and think ‘Oh man I should have done this, or I regret not doing this,’” she said. Since coming home that hasn’t happened, and she still thinks regularly of the people she met and the experiences she had — but one instance in particular stands out.

Jessop recalled a moment at the airport when she noticed a little girl staring at her. The little girl’s mom handed her to Jessop and walked off. When she came back minutes later, she handed a necklace to her daughter, a small black heart.

“The baby reached over and gave it to me,” she said. “I was going to give it back,” Jessop said, but the child’s mother told her “‘No, it’s yours. You keep it.’” It took her by surprise, how these people who had so little and were forced to leave with only what they could carry were still so generous, despite the grave circumstances.

She still has that necklace today, Jessop said. When asked about the work she did in Kabul, Jessop responded simply: “I was just taking care of people.”