Here are the 5 biggest problems military families faced in 2019

“Military families are American families, and as such, want similar life expectations and family dynamics as their civilian counterparts." 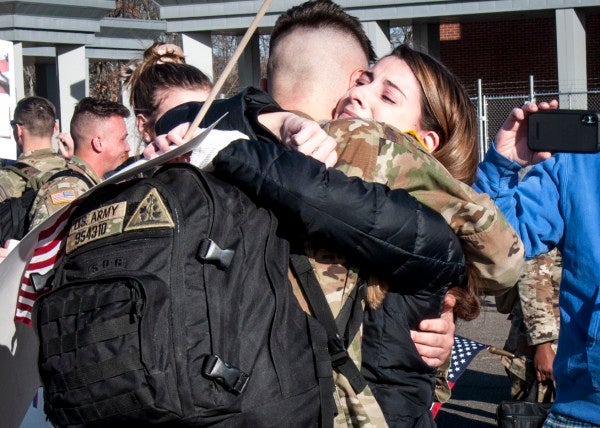 The biggest concerns for U.S. service members and their spouses last year centered around unpredictability and instability.

According to the annual Military Family Lifestyle Survey from Blue Star Families released on Wednesday, the top five concerns from the survey were military spouse employment, time spent away from the family, their children's’ education, stability of the family, and lack of control over military careers.

More than 11,000 active-duty, reserve, and national guard troops, along with their families, responded to the survey, which was conducted from May 6 to June 21 last year.

“Military families are American families, and as such, want similar life expectations and family dynamics as their civilian counterparts,” the survey's executive summary says. “These expectations, however, are fundamentally at odds with the unpredictable, and often inflexible, day-to-day military job demands, routine relocations, and many elements of the current defense personnel system.”

Child care is one of the top concerns for military families. More than half of the troops who responded to the survey said that the “unavailability of childcare negatively impacted their pursuit of employment and/or education.”

And more than a third of respondents who have a child with special needs said that their community doesn’t have the resources they need.

Spousal employment also remains a top concern. Per the survey, the demands of service members' jobs is one of the top three reasons that spouses who wanted to work gave for not doing so. This most recent survey specifically identified their service members' day-to-day job demands.

According to the survey, 4% of spouses and 6% of service members said that they had “seriously considered” attempting suicide in the last year. Of that group, almost half got professional help, but 44% did not, citing the concerns over how it would impact their careers, or the careers of the service member in the case of spouses, as a reason for not seeking help.

In order to start bridging the gaps identified by the survey, the comprehensive report which discusses the survey's results calls on military leaders to “continue to work to build trust, increase career control, and refine processes to improve outcomes” for family members.

Hisako Sonethavilay, director of Applied Research at Blue Star Families, told Task & Purpose that while change takes time, surveys like this are important because they “keep service members and military spouses' thoughts and experiences at the forefront of those who make changes for policy and programs.”