Though the Navy only formally banned alcohol for six years until the advent of Prohibition, sailors went wild for ice cream. 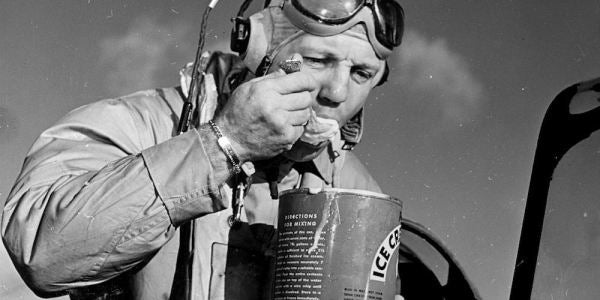 On July 1, 1914, the U.S. Navy implemented the cruelest and most unusual punishment in its venerable history: a ban on alcohol.

Under General Order 99, drinking “alcoholic liquors on board any naval vessel, or within any navy yard or station,” became prohibited, with commanding officers “held directly responsible for the enforcement of this order,” according to a U.S. Naval Institute reflection on the 100th anniversary of the ban in 2014. Secretary of the Navy Josephus Daniels delivered the order; described as a “teetotaler,” Daniels was ridiculed in the press for the decision for years, only for the U.S. to constitutionally establish national Prohibition just six years later.

The Navy’s Prohibition pregame is memorable not just for its ridiculousness but also for giving American sailors (and eventually everyone else) an insatiable appetite for ice cream. Sure, ice cream’s been an American tradition since George Washington spent $200 on the treat in a single summer, but Prohibition created national cravings that persisted across military and civilian worlds even after alcohol was legalized again in 1933. If there’s nothing as American as apple pie, that apple pie tastes a billion times more patriotic with a scoop of ice cream.

Though the Navy only formally banned alcohol for six years until the advent of Prohibition, the service went wild for ice cream ‚ and stayed that way for generations. Ice cream only gained more cultural significance as a salve for low troop morale during the long overseas deployments of World War II.

“In 1942, as Japanese torpedoes slowly sank the U.S.S. Lexington, then the second-largest aircraft carrier in the Navy’s arsenal, the crew abandoned ship—but not before breaking into the freezer and eating all the ice cream,” writes Matt Siegel in a masterful August essay for The Atlantic on the American military’s odd history with the treat. “Survivors describe scooping ice cream into their helmets and licking them clean before lowering themselves into the Pacific.”

“The finest time I had was in the sick bay one day when a Marine obtained an ice cream freezer,” one veteran wounded during the Allied amphibious assault on Japan recalled in a letter published in Anne Cooper Funderberg’s excellent Chocolate, Strawberry, Vanilla: A History of American Ice Cream. “We mixed all together in the freezer, and there were fellows so homesick they were almost crying.” (Blue Seal ice cream built its first factory on a U.S. military base in Okinawa in 1948.)

The Army immediately recognized ice cream’s impact on troop morale. In 1943, the branch’s legendary Quartermaster Corps was shipping more than 135 million pounds of ice cream mix to Allied bases worldwide, per Funderberg; by February 1945, the Corps claimed it could deliver half-pints of icy relief “right to the foxholes.”

But that wasn’t enough: According to Funderberg, Secretary of the Navy James Forrestal put a high premium on keeping American G.I.s well-stocked in ice cream after an assistant reported that the frozen manna “ the most neglected of all the important morale factors.”

To that end, the Navy in 1945 borrowed a concrete barge from the Army Transportation Corps that, retrofitted with heavy-duty refrigeration units, functioned as a floating ice cream parlor for smaller vessels in the Pacific Ocean. Officially called a “BRL” (Barge, Refrigerated, Large, which sounds like a bureaucracy’s take on a Bond martini), the Navy’s beloved “ice cream ship” was basically a 265-foot-long ice cream factory, capable of churning out 500 gallons of the sweet stuff a day (USNI pegs output at 10 gallons every 7 minutes) and stashing another 500 in its cavernous freezers — on top of some 1,500 tons of meat and 500 tons of vegetables.

The Army eventually built three BRLs of its own tasked explicitly for parlor operations, and with good reason. “Can you imagine a greater tonic to body and spirit than real ice cream served in steaming jungles or on hard-won beachheads?” the National Dairy Products Corporation bragged in a 1945 advertisement. “It’s a touch of home as well as a valuable food.”

The BRL wasn’t even the wackiest ice cream scheme that service members devised during those years at war. “By 1943, American heavy-bomber crews figured out they could make ice cream over enemy territory by strapping buckets of mix to the rear gunner’s compartment before missions,” writes Siegel. “By the time they landed, the custard would have frozen at altitude and been churned smooth by engine vibrations and turbulence—if not machine-gun fire and midair explosions. Soldiers on the ground reported mixing snow and melted chocolate bars in helmets to improvise a chocolate sorbet.”

It’s hard to imagine any silver lining for the 13 years of Prohibition, but by banning booze, the Navy may have accidentally catalyzed our cultural devotion to ice cream. And no matter how or where you gulped down your first spoonful, one thing remains certain: God help you if get between a sailor and his snowy snack.

Editor’s note: a version of this post originally appeared on August 7, 2017.