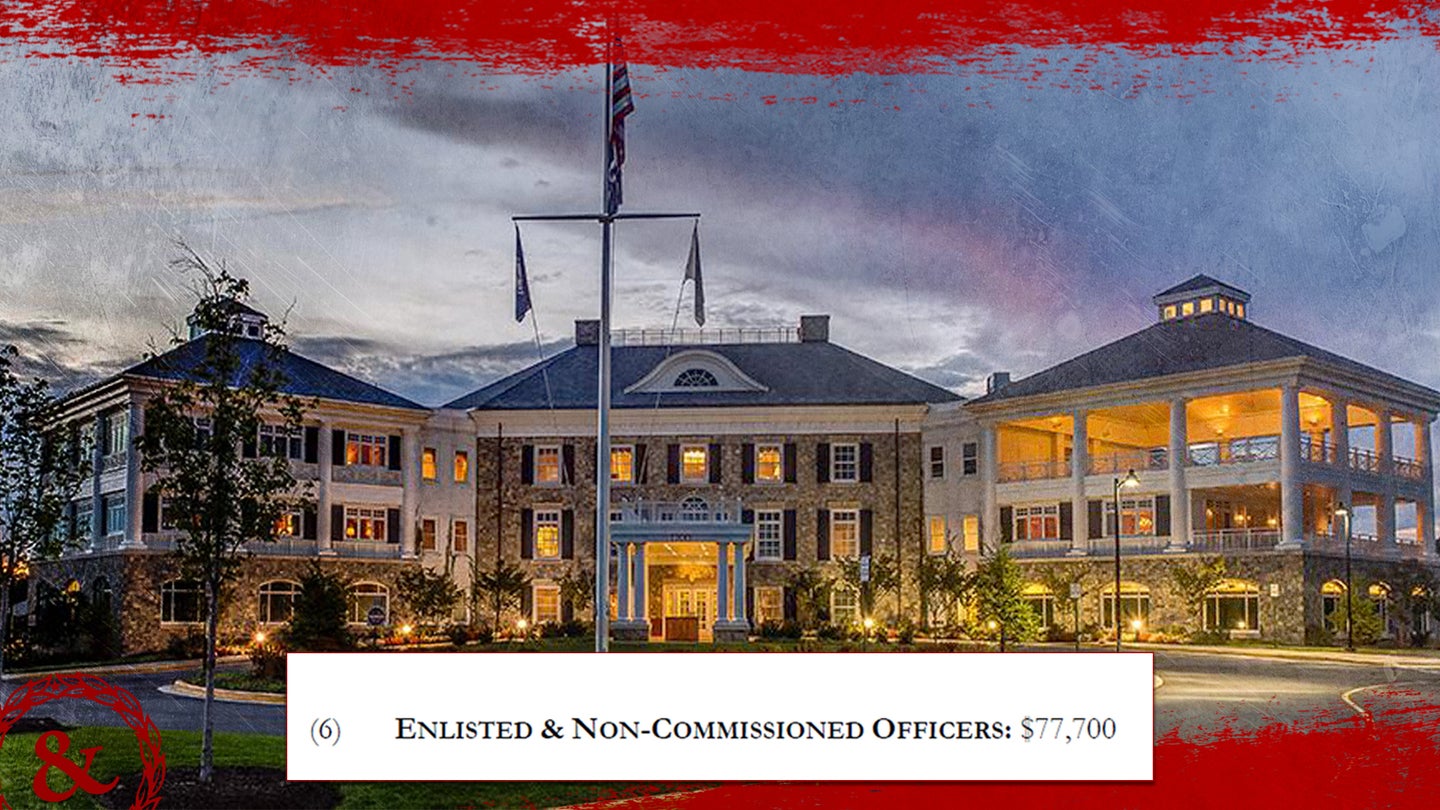 When I saw online that the enlisted member initiation fee for the Army Navy Country Club in Virginia was $77,700 I thought it was a typo.

Surely not, I thought to myself. Country clubs are expensive, yes, but almost $80,000? It seemed exorbitant to say the least. I went to the club’s website — which says its two facilities are located in Fairfax and Arlington, Virginia — looking to verify for myself that the initiation price fee sheet that I’d seen on Twitter was correct. (The original tweet has since been taken down.) I couldn’t find the prices, so I called. That call eventually went to voicemail which told me if I was interested in membership fees to fill out a form online. So I did.

The club’s membership coordinator got back to me on Wednesday with a description of the club’s “rich heritage of fostering an exceptional community,” and assurances that members and their guests would have the privilege of exploring “the luxury and leisure of countless country club activities, amenities, and services nestled within the privacy of more than 500 combined scenic acres.”

They also sent a breakdown of fees for different club amenities like golf (cart rentals, prices per rider of the golf cart, non-member golf lessons, etc.), tennis, personal trainers, and facials. And finally, the new military member information sheet, which confirmed that yes, enlisted and non-commissioned officers were to pay $77,700 to join — double what retired officers are asked to pay.

A virtual brochure on its website says the club “draws its membership primarily from active duty and retired commissioned U.S. military officers and warrant officers,” and with an enlisted fee of over $77,000 it’s no wonder why. Still, I needed more clarity: was the $77,700 was for active duty enlisted service members, retired, or all of the above? And why was it so steep? At the time of publishing this article, the membership coordinator has not responded.

The fees for active duty commissioned officers and warrant officers are broken up by rank — O-1s pay $1,200, O-2s pay $2,300, all the way up to O-10s who owe $24,900. The enlisted and NCO fees, however, are not broken up in the same way. It appears any enlisted member, current or former, private to command sergeant major, will be asked to pay the same price.

But don’t worry, the new member application form says you’ll be able to pay that out in 12 quarterly installments which comes out to $6,475 every quarter, or $25,900 a year.

Now, one can generally assume that country clubs are, of course, nice and as such, come with a high cost. With most country clubs you can expect a pricier lunch, pristine facilities, and rules about what can and can’t be worn — as there are on most golf courses. Joining a country club comes with certain expectations and if that’s what you’re into, go forth and enjoy.

But the Army Navy Country Club says on its website that its purpose is to “promote social intercourse among those citizens, military and civilian, who are bound together by the fraternal and patriotic spirit of serving the best interests and efficiency of the National Defense,” at “moderate expense.”

Aside from their decision to use the phrase “social intercourse” on their website — we don’t have time to get into that — the claim that charging enlisted service members more than $77,000 to join the club constitutes a “moderate expense” is… a stretch.

I’m under no illusion that enlisted troops are bursting with a desire to belong to this country club, or any country club for that matter. They likely have something better to do, like whatever deviant activities they’re into that week.

But given that the enlisted fee is roughly $1,600 less than what an Army sergeant major with over 20 years of service makes in a year, I think what the ANCC meant to say was that they want to serve officers “who are bound together by the fraternal and patriotic spirit of service the best interests and efficiency of the National Defense,” not you enlisted hatchet-wielding perverts.