Lt. Col. Patrick Schreiber and his wife Soo Jin, who he met during a deployment to South Korea in the 1990s, took in Soo Jin's niece Hyebin as their legally adopted daughter when she was 15 years old 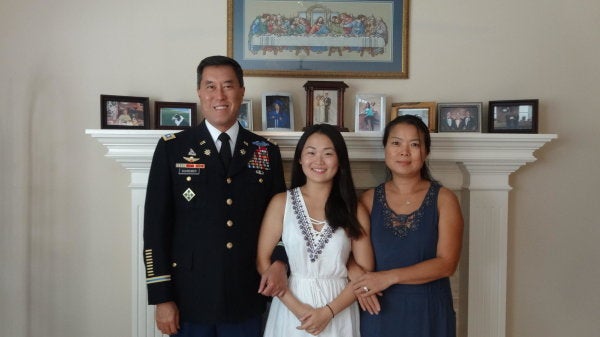 A retired Army officer with 27 years of service and six deployments under his belt is now fighting to keep his adopted daughter from deportation to South Korean.

Lt. Col. Patrick Schreiber and his wife Soo Jin, who he met during a deployment to South Korea in the 1990s, took in Soo Jin's niece Hyebin as their legally adopted daughter when she was 15 years old, McClatchy's Tara Copp reports.

The couple brought Hyebin to the U.S. in 2012, and Schreiber was deployed to Afghanistan the next year. According to The Kansas City Star, an adoption attorney advised Schreiber that the couple wouldn't face any obstacles to finalizing Hyebin's adoption and naturalization if they waited until he returned from his deployment.

But after returning from Afghanistan, he found that wasn't the case: the cutoff for a foreign-born adopted child to receive citizenship under the U.S. Citizenship and Immigration Services is 16 years old. Hyebin had turned 17 while he was deployed.

Schreiber told the City Star in 2018 that the misunderstanding of immigration law is “the greatest regret in my life,” and that the family plans to go back to South Korea with their adopted daughter if it comes down to it.

Hyedin has been studying at the University of Kansas, and is expected to graduate in December with a chemical engineering degree, McClatchy reports. She's been in the country on a student visa, but unless things change, she will be forced to leave the U.S. upon graduating.

“Lt. Col. Schreiber is Hyebin's father. No one, not even the Agency [USCIS, which denied the family's applications] controverts this simple fact,” the family's lawyer, Rekha Sharma-Crawford told the City Star. “Nevertheless, the Agency wants this father to accept that the country he loves and serves has no room in its laws to protect his family.”

Sharon Rummery, a spokesperson for USCIS, told the City Star in March 2018 that the law “clearly says that if you're 16 or older when adopted, you cannot derive citizenship from your parents … We don't make the law. That's the job of Congress.”

Per McClatchy, the U.S. Court of Appeals for the Tenth Circuit will hear their case and oral arguments on September 26. If that court also rules in favor of USCIS, Sharma-Crawford told McClatchy that they plan to appeal to the Supreme Court.

“I should have put my family ahead of the Army,” Schreiber told the City Star.