Since January, a total of seven soldiers and one airman have been killed in noncombat incidents while supporting U.S.-led military operations in Iraq and Syria 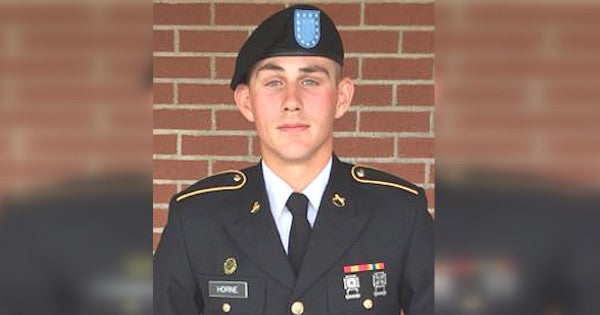 Originally from Atlanta, Louisiana, he died in Riyadh, the news release says. No other details about how he died were immediately available. His death is under investigation.

Horne joined the Army in May 2015, signing an eight-year contract, according to the Army. He deployed to Saudi Arabia in January and he has two military awards listed: The National Defense Service Medal and Army Service Ribbon.

“Our thoughts and prayers are with the Horne family during this tragic event,” said Maj. Valerie Palacios, spokeswoman for the 200th Military Police Command. “Specialist Horne was a professional and was committed to the mission. We are grateful for his service. A thorough investigation is being conducted into the circumstances, and therefore we are unable to provide any further information at this time.”

Since January, a total of seven soldiers and one airman have been killed in non-combat incidents while supporting U.S.-led military operations in Iraq and Syria, according to the Defense Manpower Data Center.

Separately, investigators are looking into the possibility that Marine Raider Gunnery Sgt. Scott A. Koppenhafer was accidentally killed by U.S. or Iraqi forces on Aug. 10 in Ninawa province, Iraq.

The Defense Department initially announced that Koppenhafer had been killed in combat, but a subsequent news release said he died from “fatal wounds while supporting Iraqi security forces.”

UPDATE: This story was updated on Aug. 19 with more information about Spc. Horne's service in the Army.