It cost the Navy at least $10 million and 18 months to help come up with the fiery new recruiting... 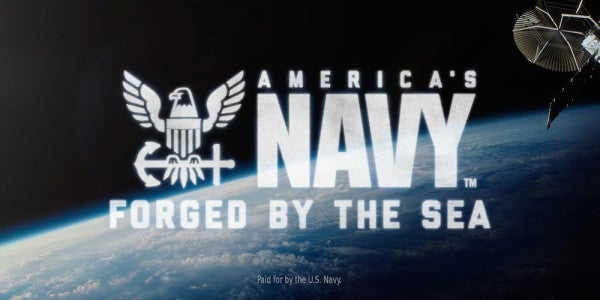 It cost the Navy at least $10 million and 18 months to help come up with the fiery new recruiting slogan “Forged By The Sea.” But after just before revealing its new rallying cry on Dec. 5, the branch appeared prepared to shell out a few thousand dollars more to lock down the rights to the phrase.

The oldest active trademark for “Forged By The Sea” belongs to Alyson Pacini, a longtime jeweler and co-owner of Designs By S&R; on Massachusetts’ Cape Cod who applied for and received the rights to the phrase in November 2016, after adopting it for her personal jewelry line in 2011. The Navy recently received its own trademark to use the four words on non-jewelry goods like toys and puzzles, but emails obtained by Task & Purpose show Navy officials were still trying to extract Pacini’s trademark from her just weeks before unveiling the slogan as part of a slick new ad campaign during the annual Army-Navy football showdown on Dec. 9.

Related: The Navy's New Slogan Took 18 Months And Millions Of Dollars To Think Up »

Nadine Santiago, the manager of the Navy Trademark and Licensing Program Office at the Office of Naval Research, followed up a phone call with an email to Pacini on Nov. 8 regarding the “forged by the sea” trademark.

“The Navy would like to use the saying for purposes outside the field of jewelry,” Santiago wrote in an email exchange obtained by Task & Purpose, adding that the branch “ willing to pay you $5,000 for the registration and would provide you a license to continue using the name on your business at no cost to you.” Another option, Santiago wrote, “would be for you to keep the registration and give the Navy permission to use.”

An email exchange between Nadine Santiago, manager of the Navy Trademark and Licensing Program Office at the Office of Naval Research, and Alyson Pacini, a longtime jeweler based in Orleans, Massachusetts.Obtained by Task & Purpose

Pacini responded five days later on Nov. 13, declining Santiago’s offer. “I have put in a great deal of time and effort into the pursuit of my trademark,” she told Santiago. “I support the U.S. military and I am willing to negotiate the price, as you know, a trademark can last forever.”

An email exchange between Nadine Santiago, manager of the Navy Trademark and Licensing Program Office at the Office of Naval Research, and Alyson Pacini, a longtime jeweler based in Orleans, Massachusetts.Obtained by Task & Purpose

On Nov. 14, Santiago came back with a counter-offer: $7,500. After declining that offer, Pacini told Santiago that she would have to consult with a lawyer due to her unfamiliarity with trademark law.

In an interview with Task & Purpose Friday, Pacini said that the Navy did not contact her again. “The last email I wrote to [Santiago] said I wanted to get a lawyer, and I never heard anything back after that,” she said. “A few weeks after that, they went ahead and filed the trademark for toys and puzzles and stuff.” In early December, she was shocked to see the slogan touted in the new branch’s new ad campaign:

“I never gave them any permission to use ,” Pacini told Task & Purpose. “I was dumbfounded.” (As Santiago's correspondence suggests, it’s unclear if the Navy even needed Pacini's permission in the first place: The two “Forged By The Sea” trademarks, since they deal with different types of goods, are filed under different international and U.S. classes.)

Pacini says the Navy initially contacted her in September, but once she finally read the email in October, she was hesitant to respond: “I was flustered because I assumed it was a scam,” she told Task & Purpose. “How many times does your phone say the U.S. Navy is calling you?!” When Santiago finally reached her by phone later that month, Pacini says, it felt like the branch was “all a sudden trying to rush me into something.”

“They’d been planning this big ad campaign for what, 18 months?” Pacini told Task & Purpose. “I don’t know why it took them so long, why they waited that long, to talk to me.”

When reached for comment, Santiago referred Task & Purpose to ONR spokesman Bob Freeman, who did not immediately respond to request for comment.

Related: The Navy Has A New Ad Campaign. Who Should Be Its Next Voice? »

Despite the fact that the Navy’s offer eclipses the $1,000 she originally paid for the trademark in 2016, Pacini says that after her exchanges with Santiago, she’s “100% not behind” the branch using the slogan ”because I feel like they did it so sneakily.”

Pacini’s worked hard to build her jewelry company, she says. She and her business partner first bought Designs By S&R; in 2012 after five years of working for the previous owner, and she sees the Navy’s use of her slogan as a threat to her livelihood.

“I just feel like they totally took advantage of one small person trying to make a living,” she said. “And if this isn't addressed now, they could do it to a lot of other people.”

When asked by Task & Purpose if she planned legal action against the Navy, Pacini declined to say. But she expressed her displeasure clearly.

“My grandfather was a proud Navy man; he had all the Navy memorabilia all over his house and a replica of the ship he served on in his living room,” she said. “I’m not disrespecting the service of the troops, but I don’t respect their leadership or their lawyers.”