Before and after Dec. 7, 1941, the frequent appearance of big PBY Catalina flying boats skimming the wavetops in Pearl Harbor and Kaneohe Bay would have been an eye-catching sight 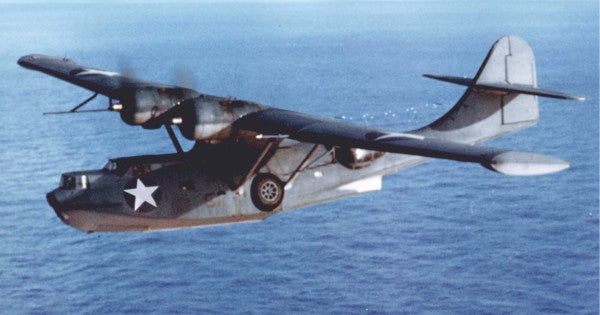 Before and after Dec. 7, 1941, the frequent appearance of big PBY Catalina flying boats skimming the wavetops in Pearl Harbor and Kaneohe Bay would have been an eye-catching sight.

The distinctive patrol bombers featured a high-mounted 104-foot wing — the same length as a B-17 bomber — and side-mountedblister windows for .50- caliber machine guns.

They came to the attention of attacking Japanese planes for other reasons.

“When the Japanese attacked Pearl Harbor, their main targets were battleships and aircraft carriers,” the Pearl Harbor Aviation Museum noted. “However, they were worried about the big PBY Catalina flying boats, which had the range to find the Japanese fleet and track it for hundreds of miles.”

The better part of three squadrons of PBYs were decimated on the ground at Ford Island and another three were set ablaze by attacking planes at Naval Air Station Kaneohe Bay.

More than 50 planes were destroyed or damaged.

Aviation history is repeating itself — at least in terms of seeing the graceful aircraft flying again — with the arrival of two PBYs for the 75th anniversary of the end of World War II.

Aerial parade flyovers with up to 14 vintage warbirds are scheduled around Oahu Aug. 29 and 30 and Sept. 2 — the day 75 years ago that Japan signed an unconditional surrender aboard the battleship Missouri in Tokyo Bay.

Aviation officials say it’s rare to see a PBY flying in Hawaii anymore, but one now known as “Princess of the Stars” will be landing in Kaneohe Bay Friday at 7 a.m. for a rendezvous with another bit of history. The aircraft now is at Daniel K. Inouye International Airport.

In a commemoration flight for the 75th, the flying boat will transport a group of Navy Explosive Ordnance Disposal personnel for a dive on a PBY-5 that was sunk on Dec. 7, 1941, in Kaneohe Bay, and still lies in three pieces in 30 feet of murky water between the base hangars and Coconut Island.

PBY pilot Peter Houghton said it will be a “tribute” flight to Don Long, now in his upper 90s, who is believed to have been a crew member in that particular PBY when it was strafed by attacking planes.

On a 2016 visit to Oahu for the 75th anniversary of the Pearl Harbor attack, Long said a crew member was stationed with each of the afloat PBYs in Kaneohe Bay at all times, and he had relieved another man that morning. He said to the best of his knowledge, three PBYs were in the harbor.

“When I first heard the (approaching) aircraft, I looked up and saw them and I assumed it was the Army Air Corps on maneuvers,” he said at the time.

His plane soon “got hit, got burned (and) sunk,” he said. “I had the experience of swimming through burning oil and water.”

But Long added that he was lucky. “The other guys weren’t that day,” he said. Thirty-three PBYs at the base were damaged or destroyed. Eighteen sailors and two civilians were killed.

The Princess of the Stars, which is based in Eugene, Ore., was even repainted to represent the colors of a VP (Patrol Squadron) 14 PBY based out of Kaneohe Bay at the time.

“Knowing that we were going over there, we wanted a fitting tribute to the veterans and also the people that didn’t make it,” Houghton said.

Marine Corps veteran Coy Pfaff’s grandfather, Stuart Barr, bought the PBY from a museum in France. Pfaff now is director of Soaring by the Sea Foundation for the “upkeep of the aircraft and to keep the thing flying, keep people educated about it,” he said.

PBYs could be used for long-range reconnaissance, bombing, resupply, aircrew rescue and other tasks. In the Battle of Midway in 1942, PBYs searched out hundreds of miles along probable Japanese approach routes.

Encountering Japanese transports in the early hours of June 4, the slow patrol planes hit the oiler Akebono Maru with one torpedo — the only successful U.S. aerial torpedo attack of the entire battle, according to the Navy. A PBY later reported the first contact with the Japanese carrier force.

The Princess of the Stars was built in 1943 under license in Canada and was based out of Greenland and Iceland, Houghton said.

Late in the war the PBY discovered a German submarine off Iceland. The third of four bombs made contact and U-342 went down. “It was the U-boat’s first cruise, so their first mission out, they got sunk,” Houghton said.

Pfaff came to Oahu on the Navy amphibious assault ship USS Essex with the PBY after a two-week quarantine in San Diego and testing negative for coronavirus.

“We’re here for the veterans,” Pfaff said, adding that, “Everything else is secondary.” Coronavirus has complicated planning and the latest cancellations include the premiere of the documentary “First to Fight — Pacific War Marines,” and a 75th commemoration dinner.

The Pacific Northwest Naval Air Museum out of Whidbey Island, Wash., helped sponsor the PBY trip to Hawaii in support of the more than 52 World War II veterans still expected to attend.

Houghton, one of the pilots, said “it’s an adventure every time” flying a PBY. “It’s a big airplane. Its design dates back to 1935. So it’s not modern by any means, and a lot of quirks, a lot of peculiarities, but it’s always a pleasure.”

He added that taking off from Pearl Harbor, the main target of the Dec. 7, 1941, attack, was “very humbling.”