The man really liked his football. 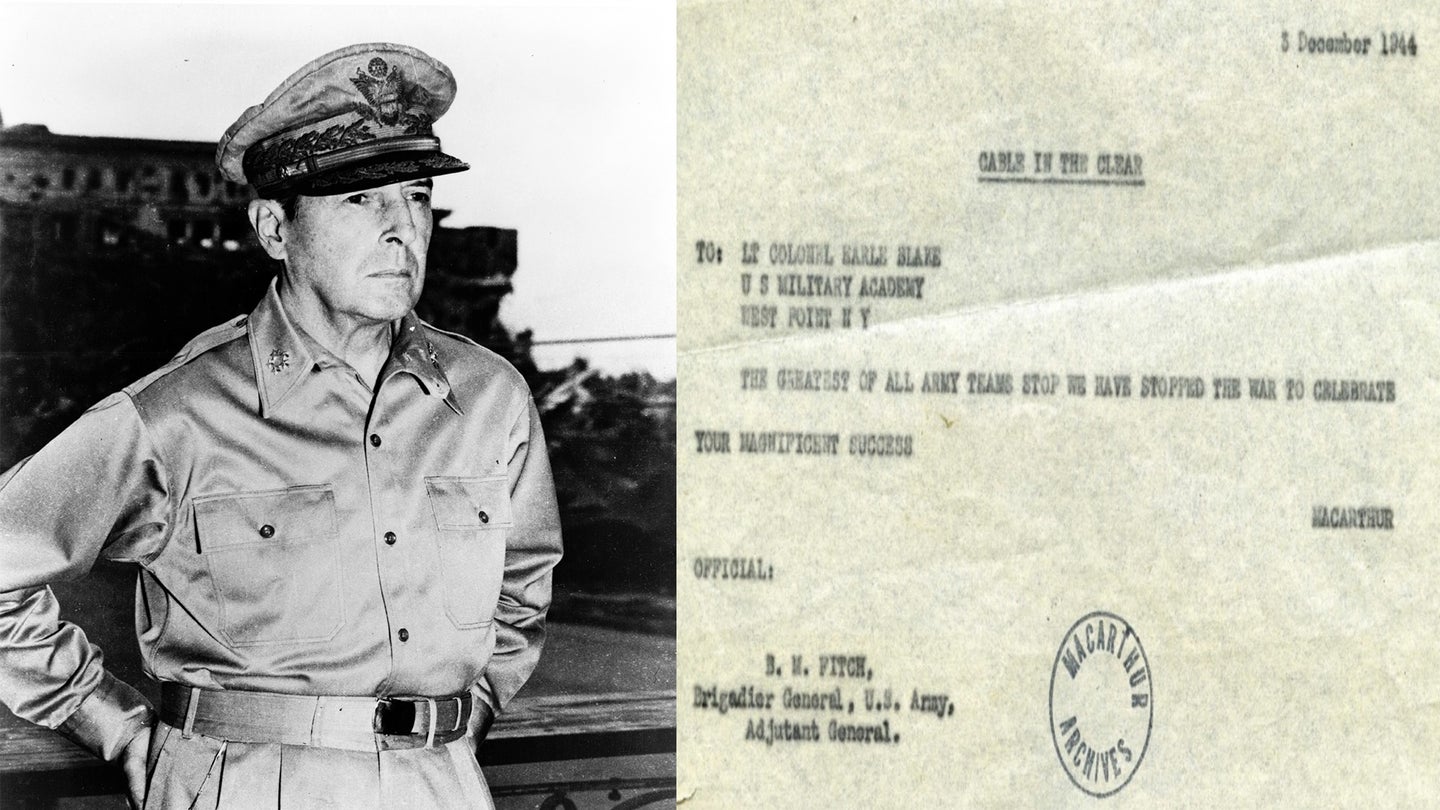 The annual Army-Navy football game has been through some ups and downs. It’s one of the longest-held and storied college football rivalries around, even if the teams themselves aren’t among the best in the game.

At the height of World War II, though, both West Point and Annapolis were having some of their best years ever, and the notoriety around the game was such that legendary Gen. Douglas MacArthur claimed he “stopped the war” to celebrate an Army victory in the game.

Heading into the 1944 matchup, Army and Navy were ranked as the top two college teams in the nation. The widespread induction of young men into the ranks of the U.S. military, necessitated by the global conflict, had been a boon to the service academy football programs, as plenty of the top football players in the nation were now suiting up for them. Two of the star players for Navy, for example, tackle Don Whitmire and running back Bob Jenkins, had both transferred from the University of Alabama to play at Annapolis. Some colleges, like Michigan State or Stanford, had suspended their football programs altogether. Others were now filling out their teams with younger players or those otherwise ineligible for the draft, and many players were diffused into “service teams,” essentially playing football for the Army or Navy while in training and competing against various colleges. In 1943, for instance, a team from the Navy’s Great Lakes Training Base ended Notre Dame’s undefeated season.

The Army and Navy teams were especially dominant, though, so the 1944 game was considered kind of a big deal. With Army ranked as the top team in the nation and the Naval Academy right behind it, this was a de-facto national championship game for college football. Grantland Rice, one of the country’s preeminent sports writers at the time, said it would be “one of the best and most important football games ever played.”

These days, the Army Navy game isn’t one of the best and most important football games ever played; some would even go so far as to say that “nobody actually cares about the Army-Navy game.” But the 1944 matchup was different. It was initially scheduled to be played in Annapolis, where Thompson Stadium could accommodate just under 19,000 people, rather than the traditional location of Philadelphia, Pennsylvania, as President Franklin Delano Roosevelt had ordered the location of the game to alternate between the two service academies for the duration of the war. Interest in the game was high enough, though, that on Nov. 17, 1944, the game was relocated to Baltimore, Maryland’s Municipal Stadium. Tickets sales would go towards war bonds, and sold out in 24 hours. It raised $58.6 million for the war.

The Naval Academy midshipmen sailed across Chesapeake Bay to Baltimore, while the Army cadets arrived on troopships escorted by Navy destroyers.

And on Dec. 2, 1944, in front of a crowd of 66,659, the game began. It started out as kind of a slog, with plenty of turnovers and New York Times sports writer Allison Danzig chronicling “the unusual ferocity of the give and take.” By the end of the first half, the score was just 7-0 in favor of Army. By the end of the third quarter it was 9-7, after a touchdown by Navy and a safety by Army, it was 9-7. The game broke open a bit after that with Army scoring two touchdowns in the fourth quarter and eventually winning the game 23-7, surely much to the delight of Army fans everywhere.

Among those fans, of course, was MacArthur. The general never played for the Army football team, he was just the manager before graduating from West Point in 1903, but needless to say, the man liked sports. As he wrote to then President Calvin Coolidge following the 1928 Olympics during his time as the  U.S. Olympic Committee president, “Athletic America is a telling phrase. It is talismanic. It suggests health and happiness. It arouses national pride and kindles anew the national spirit. In its fruition it means a more sturdy, a more self-reliant, a more self-helping people. It means therefore, a firmer foundation for our free institutions and a steadier, more determined hold on the future….Nothing is more synonymous of our national success than is our national success in athletics.”

During World War II, MacArthur would reportedly send messages to the coach of the Army football team, Earl “Red” Blaik, discussing how the team was doing. Among them was a congratulations on winning the 1944 Army-Navy matchup, reading, “The greatest of all Army teams – Stop – [this was the days of the telegram] We have stopped the war to celebrate your magnificent success.”

Of course, the war didn’t actually stop. Hundreds of soldiers, sailors, airmen and Marines continued to face death in combat. Like the destroyer USS Cooper, which was sunk in the Philippines shortly after midnight on Dec. 3, 1944, with 191 lives lost. But the 1944 Army-Navy game would still be remembered as a brief moment of athletic celebration amid World War II, which wouldn’t end for another nine months, and go down as one of the best remembered college football games in history.