"All of the other demonstrations remove PFAS from the water through filtration. Our method actually destroys PFAS" 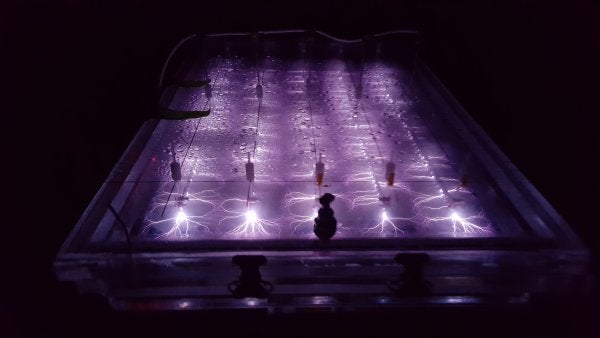 The Air Force just tested a cutting-edge water-cleaning technology that sounds like something straight out of a superhero origin story: a plasma reactor that doesn't remove chemical contaminants from the water supply, it totally destroys them, leaving the water safe to drink without generating toxic waste, the service says.

The Air Force on Tuesday announced the first field demonstration of the Enhanced Contact Plasma Reactor, which uses water, electricity and argon gas to degrade and destroy target PFAS (per- and polyfluoroalkyl substances) chemicals in minutes.

The test, conducted under an Air Force Civil Engineer Center (AFCEC) contract with Clarkson University, treated hundreds of gallons of groundwater at Wright-Patterson Air Force Base over a two-week period and gave engineers time to experiment with different durations and flows to optimize efficiency, the Air Force said in its press release.

The reactors are a response to a growing PFAS water contamination problem at military bases across the country. PFAS chemicals are a critical part of the firefighting foams used by the military since the 1970s, which leached into the water supply over the course of several decades.

The chemicals have been linked to cancer, fertility problems, liver damage, high cholesterol and other health problems, scientists say, and they're extremely persistent in the environment and in the human body, which means they don't break down over time.

In January, Congress created a task force to figure out new means to address the contamination, which officials say will cost more than $2 billion to address. But fully extracting PFAS from a target water supply is a major engineering challenge, and it could take years for the task force to simply to get a handle on what needs to be done.

That's where the plasma reactor comes in: the result of a 2011 AFCEC initiative to develop efficient, sustainable groundwater clean-up solutions, the reactor doesn't separate the two most-researched compounds within the PFAS group, PFOS and PFOA, from a target water supply, it eliminates them entirely.

“The argon gas concentrates PFAS at the gas-liquid interface and plasma is generated at that interface, which then destroys PFAS,” explained Dr. Selma Mededovic.

The plasma then breaks down PFAS molecules into smaller components without the need for any extra chemicals or additives, Mededovic said.

“This is the only technology that actually destroys PFAS molecules that has been demonstrated at this scale, it doesn't just remove them from water,” said Dr. Tom Holsen, also of Clarkson University. “All of the other demonstrations that we're aware of remove it from the water through filtration so there is still a PFAS-containing waste. Our method actually destroys PFAS.”

The point of the demonstration was to transition the reactor technology from the laboratory to the field, the Air Force said. According to researchers, the next steps will be to write a detailed analysis of the treated water and figure out how to scale up the plasma reactor design for larger projects.

“PFOS/PFOA is a national issue, and research like this could lead to the breakthroughs we need to address potential contamination,” said Mark Correll, Deputy Assistant Secretary of the Air Force for Installations, Energy and the Environment, in the Air Force press release.

Even if the plasma reactor ends up being a bust, there is still the possibility of a certain…how to say it? Unfortunate accident, that could give America the chemical-compound-chopping superhero it never knew it needed.