Mattis Declines To Suck Up To Trump, Praises Troops Instead

President Donald Trump held a cabinet meeting at the White House on June 12, the first to include all of... 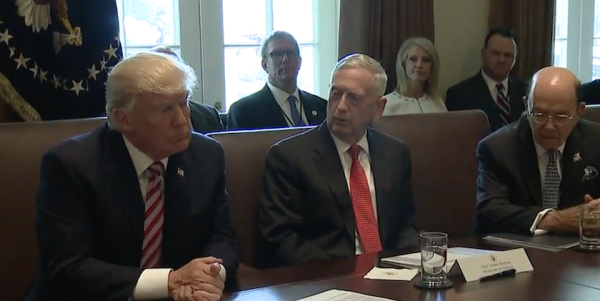 President Donald Trump held a cabinet meeting at the White House on June 12, the first to include all of the heads of the executive branch agencies. Surrounded by reporters, the president began the meeting by enumerating the various ways his administration has “achieved tremendous success” in its first five months and lauding his assembled senior advisors.

“I choose each person at this table, and I chose them, not only because of their remarkable experience and success, but because they’ve all united by one shared goal,” Trump said. “What they want to do is one very simple, but very beautiful goal: serving and defending our beautiful nation.”

The leader of the free world followed by revealing the very beautiful goal of the meeting: to applaud his administration.

Trump asked each of his cabinet members to introduce themselves starting with Vice President Mike Pence, who set the tone of the meeting by showering the president in praise: “It’s the greatest privilege of my life to serve as vice president to a president who is keeping his word to the American people, and assembling a team that is bringing real change, real prosperity, and real strength back to our nation.”

Most of the other senior cabinet members followed suit, taking turns thanking the president for the chance to serve in his administration and stroking his ego.

“On behalf of the entire senior staff around you, Mr. President, we thank you for the opportunity and the blessing that you given us to serve your agenda and the American people,” said Reince Priebus, the White House chief of staff, “and we’re continuing to work very hard every day to accomplish those goals.”

“Mr. President, what an incredible honor it is to lead the Department of Health and Human Services at this time under your leadership,” said Tom Price, the agency’s head.

And then there was Secretary of Defense Jim Mattis, who threw cold water on Trump’s executive love-fest.

“Mr. President, it’s an honor to represent the men and women of the Department of Defense,” he said. “We are grateful for the sacrifices our people are making in order to strengthen our military, so our diplomats always negotiate from a position of strength.”

Mattis, a retired four-star Marine Corps general, has remained staunchly apolitical since assuming the position to the relief of critics of the administration, who are troubled by the president’s emphasis on loyalty amid the ongoing investigation into ties between some of Trump’s senior associates and the Russian government.

Of course, it’s impossible to say whether or not Mattis’ omission of any praise for the president was intentional, but it seems to align with remarks he made in a commencement address last month at West Point, during which he stressed the need for service members to remain politically neutral.

“So long as our nation breeds patriots like you, defenders who look past the political rhetoric of our day and rally to our flag, that Army tradition of serving our country will never die,” Mattis told the graduating cadets.

“We in the Department of Defense recognize that there are a lot of passions running about in this country, as there ought to be in a vibrant republic,” he added. “But for those privileged to wear the cloth of our nation, to serve in the United States Army, you stand the ramparts, unapologetic, apolitical, defending our experiment in self-governance, you hold the line.”