“The management of this company should be in jail." 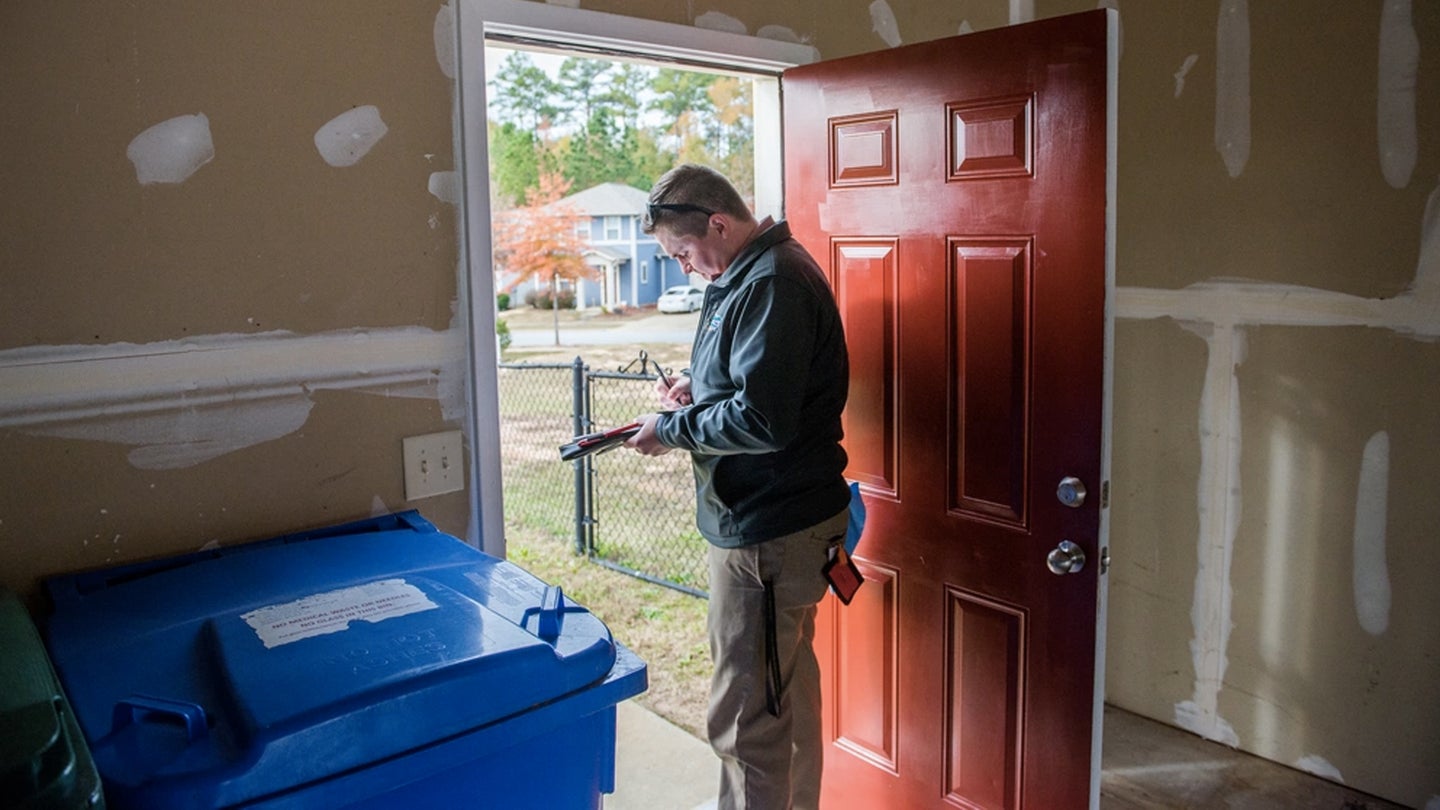 At Fort Benning Nov. 21, 2019, a housing inspector carries out a quality assurance inspection of a home in the Patton Village housing area with the aim of having it ready for occupancy by a military family. Fort Benning during the past year has made housing inspections much more stringent as part of a broad effort to improve on-post housing services. (Army photo / Patrick Albright).
SHARE

The Department of Justice’s announcement last week that a private military housing company guilty of “pervasive fraud” would be fined $65 million only further angered some service members who believe that the government should stop contracting with the company altogether.

Instead of performing maintenance on the homes of family members, Balfour Beatty employees allowed toxic mold, insect infestations, water leaks, burst pipes and other problems to spread through those homes, leading to health problems like migraines, asthma, and even burns from the ruptured hot water pipes.

“Instead of promptly repairing housing for U.S. service members as required, BBC lied about the repairs to pocket millions of dollars in performance bonuses,” said Deputy Attorney General Lisa Monaco, the second-highest-ranking official in the Department of Justice. “This pervasive fraud was a consequence of BBC’s broken corporate culture, which valued profit over the welfare of service members.”

Balfour Beatty Communities pleaded guilty to major fraud against the United States and was sentenced to pay over $33.6 million in criminal fines and over $31.8 million in restitution to the U.S. military, serve three years of probation, and engage an independent compliance monitor for a period of three years. However, onlookers said it was not enough to outweigh the harm the company had done to service members and their families.

“They should have the contract revoked and be banned from our bases,” wrote another on Twitter. “There is no incentive to treat [service members] well or maintain the homes.”

“The management of this company should be in jail,” said another Twitter user.

When asked about those concerns, Balfour Beatty Communities directed Task & Purpose to a statement released last week, where the company said it was “committed to the highest standards of ethical conduct,” and that “the wrongdoing that took place is completely contrary to the way the Company expects its people to behave.”

However, last week’s headlines were only the latest in a series of stories documenting the company’s poor record maintaining the homes of service members. One lawsuit alleged one instance after another of “squalid conditions,” such as plumbing issues, insect and rodent infestations, asbestos, and mold, that the housing provider did little to repair.

One family involved in the lawsuit alleged that they developed asthma and migraines after moving into their Balfour Beatty-maintained home at Sheppard Air Force Base. James Banner, the father of the family, had such intense migraines he was eventually discharged from the military, the lawsuit said. Another family at Fort Bliss said a hot water pipe ruptured in their children’s bedroom in the middle of the night, “burning them with [scalding] hot water,” the lawsuit said.

With that kind of track record, you would think the Department of Defense would have cut ties with Balfour Beatty a long time ago. After all, individual service members are routinely fired for much less serious offenses, such as allegedly trying to turn an AK-47 into a plaque, or for trying to stop a COVID-19 outbreak, or for just plain old penis drawings.

Despite mismanaging homes across the military and getting paid millions of dollars while doing it, Balfour Beatty will keep its post for the foreseeable future. In fact, most contracts between the company and military bases will last another 40 or 50 years or sometimes longer, said Sarah Lynne Kline, co-founder and community outreach director for Armed Forces Housing Advocates, a non-profit for helping military families affected by poor housing issues. That’s because military housing is such a financially risky business that in order to acquire loans, companies have to have longer contracts, Kline explained.

Even if the military wanted to cancel those contracts, the government’s goal for at least the past quarter-century has been to privatize military housing as much as possible. In 1996, Congress stood up the Military Housing Privatization Initiative, which was meant to encourage private companies to provide housing “faster and more efficiently than traditional military construction processes would allow,” wrote the Office of the Assistant Secretary of Defense for Sustainment on its website.

“DoD’s long-standing policy is to rely first on the private sector for its housing, paying housing allowances to its service members, where roughly 63 percent of military families live,” the office continued.

Believe it or not, at the time MHPI was meant to address “the poor condition of DoD owned housing” and “a shortage of quality affordable private housing.” However, 25 years later, the quality of military housing still leaves much to be desired, as does the government’s oversight of the contractors who provide it. The Department of Defense does not appear interested in changing the situation, Kline explained.

“The DoD did not want to manage housing at the time MHPI was created, as the priorities of the DoD and the branches were focused elsewhere,” she said. “It appears that DoD would sooner approve a few billion dollars on procuring aircraft, which is just an estimated amount of what it might cost to shift housing back to the DoD and dissolve MHPI.”

It’s not as if the military can’t cancel its half-century-long contracts with companies like Balfour Beatty Communities, Kline explained. For example, the military services could send cure notices, where a contract can be terminated if the contractor does not resolve a breach of contract in a set period of time. The branches could also buy out the rest of the contracts, but neither the military nor Congress have yet to take that step.

“The U.S. government can take these people to court and seize the funds but they have not done that,” Kline said.

Part of the problem is that even if the military did dissolve its contracts with Balfour Beatty Communities, it would need another private company to take its place. But those companies are not necessarily much better than Balfour. There are 14 other private companies involved in MHPI, and they all “have their own financial, legal, and stability issues and could not feasibly take over their contract,” Kline said.

“We have searched for a model of privatized housing and a company doing it well and as of today we haven’t been able to find one,” Kline added.

At this point, the MHPI simply does not have enough oversight to prevent private companies from abusing their tenants, Kline said, and the proof seems to be in the pudding. Besides the Department of Justice’s statement last week, there are or have been lawsuits against private military housing companies at Tinker, Laughlin, Goodfellow, Keesler, and MacDill Air Force bases; Army Forts Hood, Belvoir, Meade and Bragg; Marine Corps Camps Lejeune and Pendleton; Naval Base San Diego, Naval Support Activity Hampton Roads, and Joint Bases San Antonio and Lewis-McChord, Kline said.

Not all of those lawsuits involve Balfour Beatty Communities. However, given the company’s vast portfolio across the military, and given the extent of the problems families have found there, the $65 million fee is a “drop in the bucket” and a slap on the wrist, Kline said.

“It’s disgusting to know that some of these privatized company employees caused families to become ill and lose their homes, and they just pay a fine?” she said. “It’s another example of white-collar crime.”

In August, the Department of Defense released a finalized Tenant Bill of Rights for service members and their families living in private military housing. The bill is supposed to validate a tenant’s rights to live in a healthy, working home; to obtain maintenance information from a landlord before signing a lease; to report violations to the chain of command without fear of reprisal, and other necessities.

Fifteen of the 18 rights on the current bill were implemented in February 2020. However, Kline said she has so far not seen the bill make a dent in the issues service members and their families are dealing with. “Since the tenant bill of rights has been implemented, we’ve seen the same level of fraud just implemented differently,” she told Federal News Network.

“Readiness starts with a safe home,” she told Task & Purpose. “MHPI programs have created a national security issue where service members are unable to focus on their operational readiness and jobs, and are instead suffering in substandard living conditions with their families.”